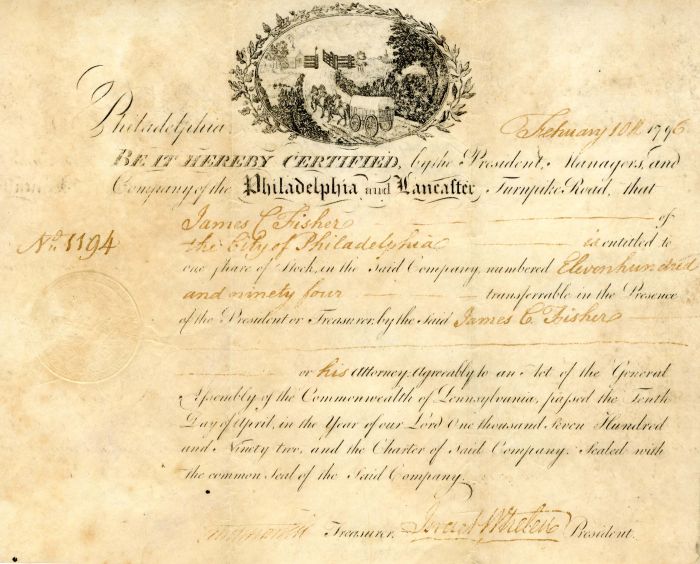 This is America's first turnpike! Printed on sheepskin and in Superb Condition it is signed by Israel Whelen as president. It has the most charming vignette of a covered wagon about to pass through a toll gate. These stocks were found in the 1970's in New York City. Becoming quite scarce in nice choice condition.

Israel Whelen, (1752-1806). Brother of Senator Dennis Whelen, Israel Whelen (also Whelan) was born on 13 December 1752, Uwchlan Twp., Chester County to Quakers Dennis and Sarah Thompson Whelen. Serving as a captain and associater in the Revolution, 1776, but disowned by the Society of Friends, he was later promoted Commissary General. He served as a commissioner and financial agent for the government in 1776, then moved to Philadelphia and opened a grocery business, taking Joseph Miller as a partner in 1794. The partners rapidly moved from groceries to shipping, and by the late 1790s had substantially expanded their enterprise to include a brisk trade in gunpowder with France. Whelen entered politics, serving in the state senate in 1796-97. In April 1796, he was appointed to a committee to secure ratification of the Jay Treaty, and in the same year he headed the Pennsylvania Electoral College that supported John Adams' bid for the presidency. He was also commissioner of assessed taxes for the District of Pennsylvania, overseeing the collection of revenues in all state counties. Whelen became American agent of the Phoenix Insurance Company of London, a director of the Bank of the United States upon its establishment in 1791, an incorporator and president of the Lancaster Turnpike Company and, in 1800, he was appointed purveyor of public surplus. While Whelen amassed a substantial fortune, and built a grand house on the turnpike near Downingtown, he lost heavily in his shipping business shortly before his death, when the French government seized a number of his vessels. The Senator married Mary Downing, daughter of John Downing. He died on October 21, 1806, Philadelphia.
Condition: Excellent