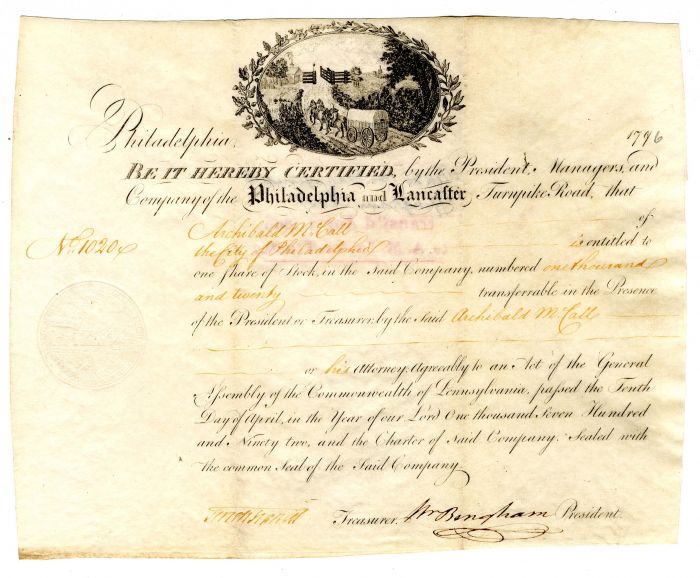 William Bingham (1752-1804), Banker, Legislator. Founder and director of the Bank of North America, the first bank in the country (1781). Served in the Continental Congress (1786-89), and in the U.S. Senate (1795-1801). He signs this early Philadelphia and Lancaster Turnpike stock in 1795 as its first President. This is America's first turnpike! Printed on sheepskin and in Superb Condition. It has the most charming vignette of a covered wagon about to pass through a toll gate. These stocks were found in the 1970's in New York City. Becoming quite scarce in nice choice condition.
William Bingham (March 8, 1752  February 7, 1804) was an American statesman from Philadelphia. He was a delegate for Pennsylvania to the Continental Congress from 1786 to 1788 and served in the United States Senate from 1795 to 1801.
William Bingham was born on March 8, 1752 in Philadelphia. He graduated from the College of Philadelphia (now the University of Pennsylvania) in 1768. Bingham first travelled to Europe in 1773, and upon returning to America joined the Philadelphia Society. Sent by the Committee of Secret Correspondence to Martinico, to reside ostensibly as a merchant, and establish communications through that colony with Silas Deane, the committee's agent in France. He departed America aboard the frigate Reprisal on July 3, 1776. During his voyages, he established links with French merchants at Martinique, captured several British ships, and returned in 1777 to America with several full loads of munitions, guns, and other vital goods necessary for the fighting of a war.

By the end of the American Revolution, Bingham was regarded as one of the richest men in Pennsylvania, having made his fortune through joint ownership of privateers and trading. He became a major land developer, purchasing lands in upstate New York and 2 million acres (8,000 km²) in Maine, later known as the Bingham Purchase. With his son-in-law Alexander Baring, he helped broker the Louisiana Purchase.

He was the founder and the first president of the Company of the Lancaster and Turnpike Road.

Bingham was director of several other enterprises. He maintained shipping ventures after the Revolutionary war, through his mercantile house called "Bingham, Inglis, and Gilmore". He was a leading member of the Pennsylvania Society for the Encouragement of Manufactures and Useful Arts, donating a Philadelphia property to be converted into a textile factory.

During the 1780s, Bingham marshaled the Second Troop of Philadelphia Light Horse, an outfit of 50 dragoons. They were glamorously clad and saw little action. William Jackson was first major and later became Bingham's land agent. Bingham escorted President-elect George Washington through Pennsylvania with his troop on his April 1789 journey from Valley Forge to New York City to assume the presidency.

During the provisional government of the United States at Philadelphia, he wrote the by-laws for the national Bank of North America. He saw the national debt as beneficial in that it attracted interest into the affairs of the government. During the first presidency, Treasurer Alexander Hamilton sought Bingham as his mentor in managing taxes, tariffs, and in constructing a national bank.

In America, he represented Pennsylvania as a delegate to the Continental Congress from 1786 to 1788. In 1790 and 1791 he was elected to the Pennsylvania House of Representatives, serving as its first speaker in 1791. He oversaw development of the land during a fledgling period of America as a member of the Society of Roads and Inland Navigation, where he worked closely with Albert Gallatin of western Pennsylvania. He later served in the Pennsylvania State Senate from 1793 through 1794. He built roads and a bridge from Philadelphia to Lancaster, Pennsylvania called the Lancaster Pike.

By 1795, he was elected to the United States Senate where he served as a Federalist and Nationalist while it was originally at Philadelphia, but he left for England in 1801 when his wife had taken ill. He was an active supporter of John Adams and when Adams was elected President, Bingham served as the Senate's President pro tempore in the Fourth Congress. On March 4, 1797, with the start of the Fifth Congress he administered the oath of office to Vice President Thomas Jefferson. He was criticized by Jeffersonian politicians for "extravagance, ostentation and dissipation". In 1813, nearly ten years after his death, John Quincy Adams said that the Presidency, the Capital and the Country had been governed by Bingham and his family connections.

The several Bingham estates were renowned for hosting many prominent aristocrats from Europe as well as Federalist meetings. At the Bingham estate, Federalists agreed to hold preliminary votings before propositions were brought before Congress publicly, thus creating unanimity among party lines.

He was also a land surveyor, and looked to develop areas currently a part of Southern New York, and Northern Pennsylvania. One of his prime prospects was at the confluence of the Chenango River and Susquehanna River. Judge Joshua Whitney Jr., settler and Bingham's agent, called this town Binghamton to honor him. Furthermore, Binghamton's resident university Binghamton University recognizes Bingham through the naming of Bingham Hall.

He married Anne Willing, daughter of Thomas Willing, President of the First Bank of the United States, and they had two daughters and a son.

Although his wife and two daughters factored prominently in the social affairs of American politics, Bingham's wife Anne died while his only son William was one year old. William Sr. left William Jr. to grow up in America with his grandfather Thomas Willing.

Bingham died on February 7, 1804 in Bath, England and is interred in Bath Abbey. His estate remained in the family until the death of William Alexander Baring Bingham (1858-1915) but it was not settled until 1964.

Bingham commissioned artist Gilbert Stuart to paint the Lansdowne portrait, a 1796 full-length portrait of President George Washington that became a gift to Lord Lansdowne. As British Prime Minister, Lansdowne had secured a peaceful end to the American Revolutionary War, and the portrait was commissioned soon after the American approval of the Jay Treaty. Stuart also painted portraits of Bingham, his wife and children.