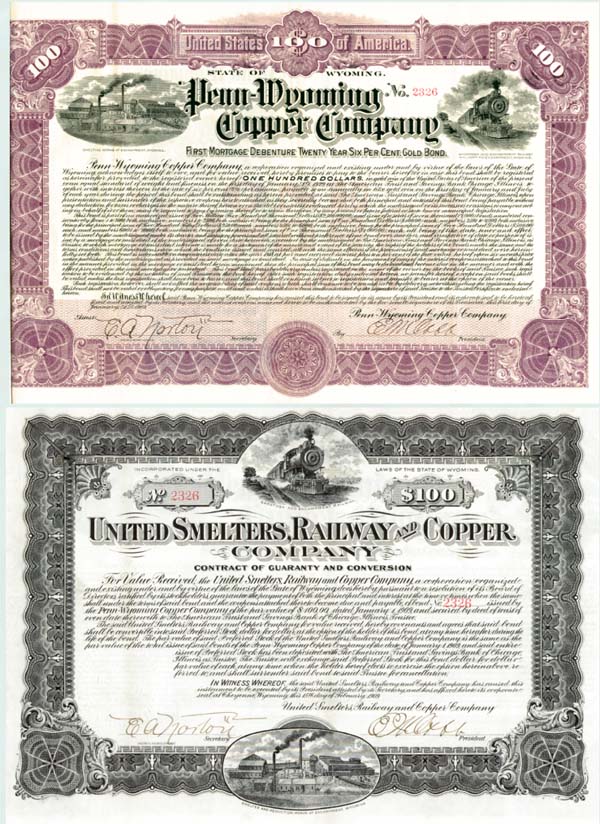 In January, 1919, it was announced that Morse Bros. Machinery & Supply Co. of Denver had purchased from the Bondholders Protective Committee, the entire assets of the Penn-Wyoming, including all the assets of the various subsidiary companies whose bond issues totaled 13,600,000. Production from properties totals 6,414,011 Ib. of copper recovered from 59,000 tons of ore equivalent to 5.4% copper. United Smelters, Railway and Copper Company owned 91% of the outstanding stock of the Penn-Wyoming Copper Company. Penn-Wyoming had substantial holdings including mineral lands, coal lands, millsite, limestone quarry, timber lands, and the townsites of Encampment, Rudefeha, and Rambler, encompassing 1,373 acres located in and near Encampment, Wyoming. Penn-Wyoming also controlled, through ownership of 90% of capital stock, Haggerty Copper Mining Co., Encampment Smelting Co., Encampment Tramway Co., Encampment Pipe Line Ditch Co., Encampment Land & Townsite Lot Co., Carbondale Coal Co., Emerson Electric Light Co., Saratoga & Encampment Railroad Co., and North American Mercantile Co. It also controlled a substantial percentage of the common stock of the Battle Lake Tunnel Site Mining Co. A wonderful certificate depicting an engine from the "Saratoga and Encampment Railway" as well as a vignette of the "Smelter and Reduction works at Encampment, Wyoming". 6% $100 Gold Bond of the Penn-Wyoming Copper Company. Attached is at least 38 of 40 coupons, as well as a contract of guaranty and conversion for the United Smelters, Railway and Copper Company. The Pair. SOLD

Item ordered may not be exact piece shown. All original and authentic.
OUT OF STOCK
Request re-stock notice?
Email this to a friend
Request Info
Previous Item (Rome & Decatur Railroad)    (Oregon Pacific Railroad) Next Item