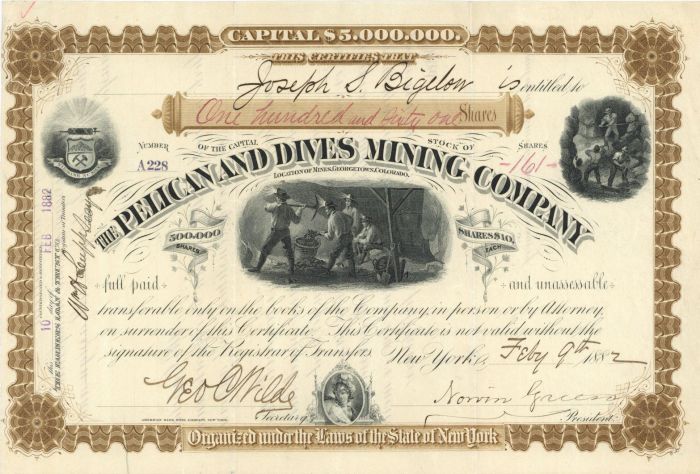 The Bismarck lode was discovered in June, 1866, by a party of prospectors from Central City. The Pelican (see Pl. XXIII, A) was discovered in 1868 and located December 19, 1869, by E. S. Streeter. The claim was 1,400 feet in length and 50 feet in width, being located under the law of 1866. The narrow claims of both the Pelican and the Dives companies failed to cover the lodes and led to almost interminable litigation. It was not until early in 1871 that the mine began producing ore. In 1872 began the fierce quarrels between the owners of the Pelican and the Dives claims which culminated in May, 1875, in the death of Jacob Snyder, one of the heavy stockholders of the Pelican mine, at the hands of Jackson C. Bishop, a lessee on the Dives. The litigation, which also started in 1872 and included suits and counter suits, injunctions and counter injunctions, finally came to an end with the consolidation of the two properties in March, 1880, when both came into the possession of the Pelican and Dives Mining Company. This company then began buying up neighboring properties, among which were the Bismarck and Seven-Thirty, the latter being purchased in 1896.

The Pelican-Bismarck vein system, consisting of a main trunk vein giving off important branches at both ends, is perhaps the strongest vein system in the Silver Plume region. (See Pl. XXIV.) On account of the complexity of the trunk vein, which consists in large part of overlapping, splitting, and reuniting, or parallel veins occupying a relatively narrow zone rather than a single well-defined vein, and on account of the fact that the relations of the branches to the trunk vein are not everywhere clear, there has been a great deal of confusion in the nomenclature. The trunk vein has been variously called the Dives-Pelican, the Eagle Bird, and the Bismarck. From the northwestern portion of this vein splits off the Seven

Thirty vein. The southeastern portion of the trunk vein gives off as a branch the Wisconsin Corry City vein, and farther southeast splits into the Dives and Baxter veins, of which the former is stronger, its eastern extension going under the name of the Dunkirk vein. For the sake of simplicity the trunk vein between the branches will be called the Pelican; the same vein northwest of the intersection with the Seven-Thirty will be called the Bismarck. The trunk vein as here defined and its northwesterly extension past the intersection with the SevenThirty have a northwesterly strike and a dip to the northeast at a variable angle, averaging about 65°. The principal mine which has exploited this trunk vein has long been well known by the name of the Dives-Pelican. This mine is said to comprise about 13 miles of underground workings."

The Pelican-Bismarck vein has formed along a strong fault zone, whose course was determined by a preexisting dike of rhyolite porphyry (fig. 33). Evidence of this movement is

afforded here and there by discordance of the walls on the two sides of the vein, and throughout the underground workings (Pl. XXV) by zones of brecciation and trituration, by slickensided walls, and by surfaces striated by differential movement. The direction of these striæ indicates that the movement was nearly horizontal.

The fault along which the vein subsequently formed has followed the porphyry dike for a maximum distance of half a mile, as measured in the Pelican tunnel. Along this portion the vein has been most productive.

Norvin Green (April 17, 1818  February 13, 1893) was an American businessman, physician and politician. He served as president of the Western Union Telegraph Company from 1878 until his death in 1893. He was a founding member and the first president of the American Institute of Electrical Engineers (AIEE), which later became part of the Institute of Electrical and Electronics Engineers (IEEE).

Green was born in New Albany, Indiana on April 17, 1818, the son of Virginians Joseph Strother Green and Susan Ball. The family moved to Breckinridge County, Kentucky when he was a child. As a young man he operated a flatboat grocery on the Ohio River, then ran a business that cut and sold cord wood to steamboat operators. He was able to earn enough money from these ventures to finance his medical education at the University of Louisville, where he earned his degree in 1840. That same year he married Martha English of Carrollton, Kentucky. They had five children together.

Following his graduation, Dr. Green practiced medicine in Louisville and Carrollton, Kentucky. He served as a doctor at the Western Military Institute, where he became friends with future presidential candidate James Blaine, who was an instructor there. In 1850 Green was elected to the Kentucky House of Representatives, where he served until 1853 (and again in 1867). He was appointed to supervise the construction of a federal customs house and post office in Louisville in 1853. At that time he became interested in telegraphy, and invested in telegraph lines that connected Louisville and New Orleans. He formed, and became president of, the Southwestern Telegraph Company.

Green moved to New York City in 1857. There he worked on the consolidation of many telegraph companies, culminating with the formation of Western Union in 1866, where he was named vice president. He stayed at Western Union for the rest of his life, except for three years when he returned to politics in Kentucky, being nominated to run for U.S. Senator. Upon the death of Western Union president William Orton in 1878, Green was named president of that company. He, along with others including Thomas Edison and Alexander Graham Bell, formed the American Institute of Electrical Engineers in 1884; he was its first president.

Norvin Green died on February 13, 1893 at his home in Louisville, Kentucky. He had been in ill health, and died from complications of intestinal disease. He was buried at Cave Hill Cemetery in Louisville.

Item ordered may not be exact piece shown. All original and authentic.
OUT OF STOCK
Request re-stock notice?
Email this to a friend
Request Info
(Ashepoo Mining and Manufacturing Co. signed by John B. Sardy - Autographed Stock) Next Item