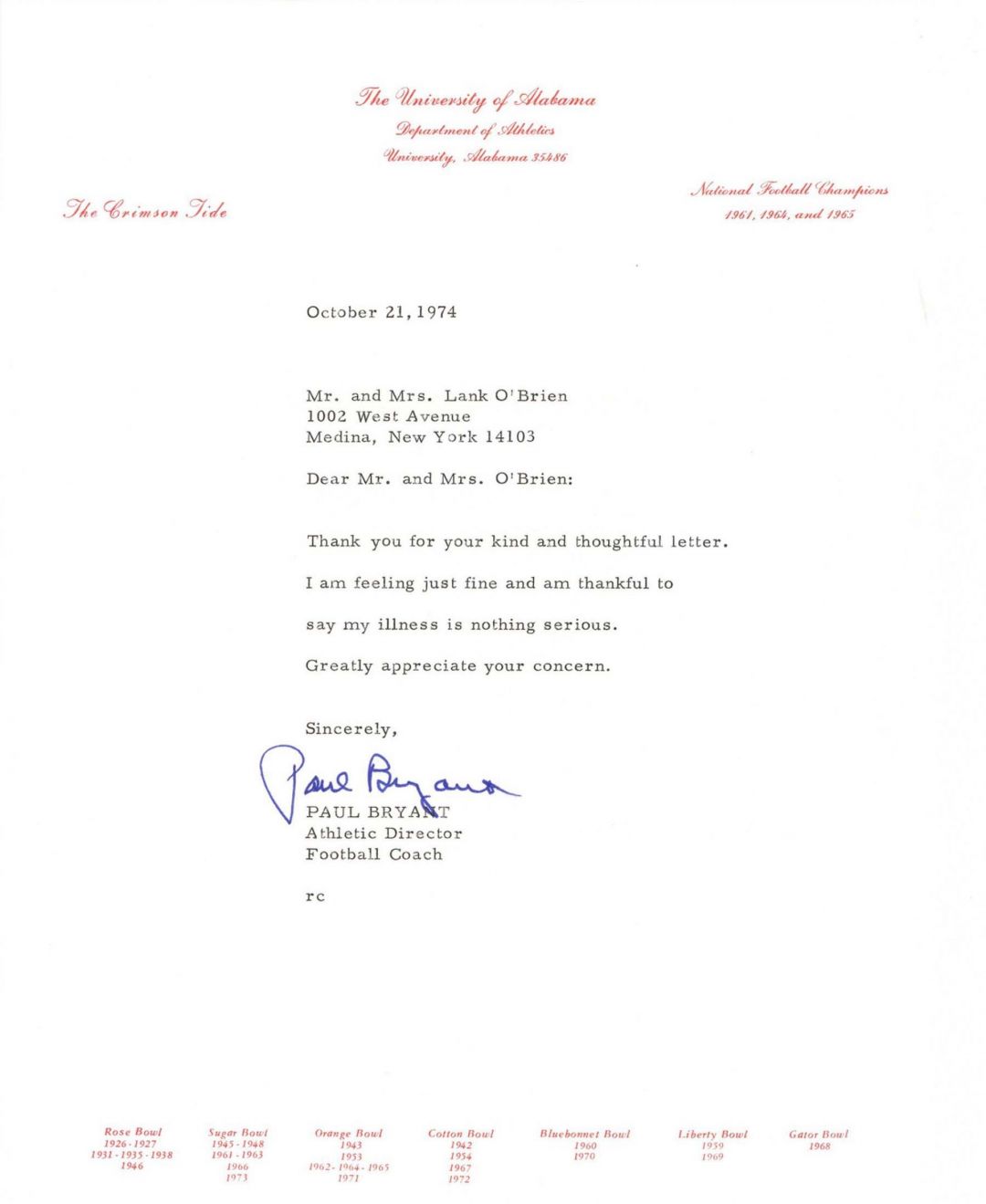 Typed letter signed by Paul Bryant on the University of Alabama letterhead stationery. 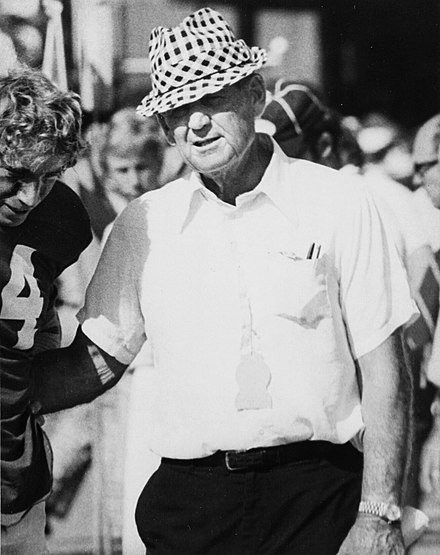 Paul William "Bear" Bryant (September 11, 1913  January 26, 1983) was an American college football player and coach. He is considered by many to be the greatest college football coach of all time, and best known as the head coach of the University of Alabama football team. During his 25-year tenure as Alabama's head coach, he amassed six national championships and thirteen conference championships. Upon his retirement in 1982, he held the record for the most wins (323) as a head coach in collegiate football history. The Paul W. Bryant Museum, Paul W. Bryant Hall, Paul W. Bryant Drive, and BryantDenny Stadium are all named in his honor at the University of Alabama. He was also known for his trademark black and white houndstooth hat, deep voice, casually leaning up against the goal post during pre-game warmups, and holding his rolled-up game plan while on the sidelines. Before arriving at Alabama, Bryant was head football coach at the University of Maryland, the University of Kentucky, and Texas A&M University.

Bryant was the 11th of 12 children who were born to Wilson Monroe Bryant and Ida Kilgore Bryant in Moro Bottom, Cleveland County, Arkansas. His nickname stemmed from his having agreed to wrestle a captive bear during a carnival promotion when he was 13 years old. His mother wanted him to be a minister, but Bryant told her "Coaching is a lot like preaching". He attended Fordyce High School, where 6 ft 1 in (1.85 m) tall Bryant, who as an adult would eventually stand 6 ft 4 in (1.93 m), began playing on the school's football team as an eighth grader. During his senior season, the team, with Bryant playing offensive line and defensive end, won the 1930 Arkansas state football championship.

Bryant accepted a scholarship to play for the University of Alabama in 1931. Since he elected to leave high school before completing his diploma, Bryant had to enroll in a Tuscaloosa high school to finish his education during the fall semester while he practiced with the college team. Bryant played end for the Crimson Tide and was a participant on the school's 1934 national championship team. Bryant was the self-described "other end" during his playing years with the team, playing opposite the big star, Don Hutson, who later became a star in the National Football League and a Pro Football Hall of Famer. Bryant himself was second team All-Southeastern Conference in 1934, and was third team all conference in both 1933 and 1935. Bryant played with a partially broken leg in a 1935 game against Tennessee. Bryant was a member of Sigma Nu fraternity, and as a senior, he married Mary Harmon, which he kept a secret since Alabama did not allow active players to be married.

Bryant was selected in the fourth round by the Brooklyn Dodgers in the 1936 NFL Draft, but never played professional football.