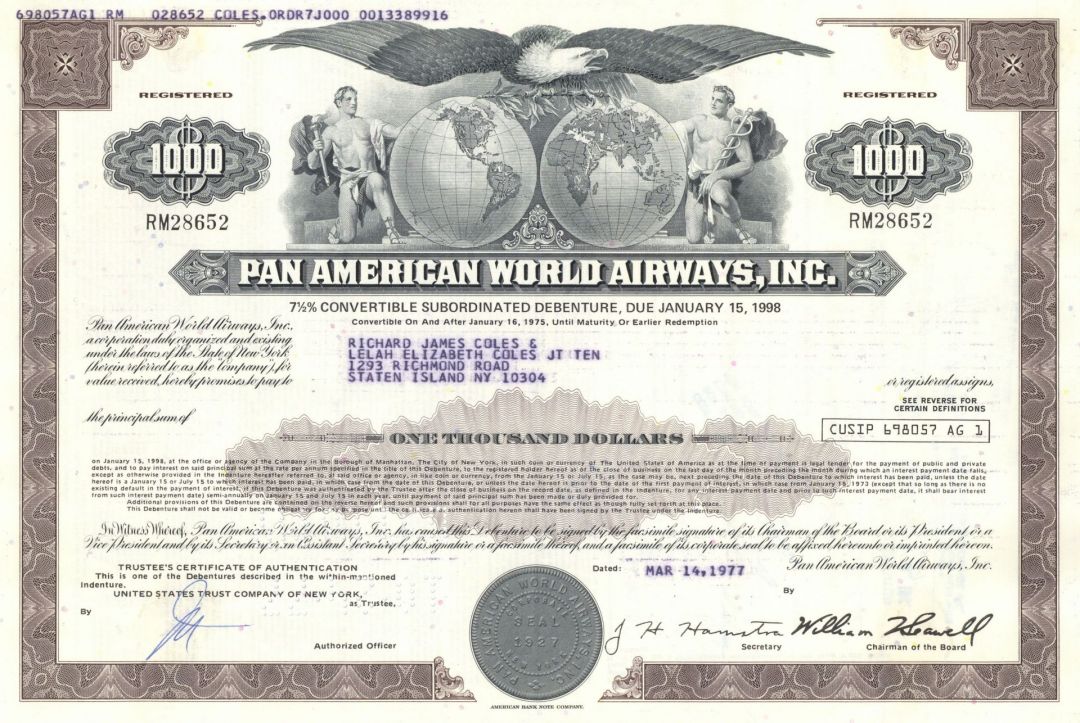 Pan American World Airways, originally founded as Pan American Airways and commonly known as Pan Am, was the principal and largest international air carrier and unofficial flag carrier of the United States from 1927 until its collapse on December 4, 1991. It was founded in 1927 as a scheduled airmail and passenger service operating between Key West, Florida, and Havana, Cuba. The airline is credited for many innovations that shaped the international airline industry, including the widespread use of jet aircraft, jumbo jets, and computerized reservation systems. It was also a founding member of the International Air Transport Association (IATA), the global airline industry association.

Identified by its blue globe logo ("The Blue Meatball"), the use of the word "Clipper" in its aircraft names and call signs, and the white uniform caps of its pilots, the airline was a cultural icon of the 20th century. In an era dominated by flag carriers that were wholly or majority government-owned, it was also the unofficial overseas flag carrier of the United States. During most of the jet era, Pan Am's flagship terminal was the Worldport located at John F. Kennedy International Airport in New York City.

Pan American Airways, Incorporated (PAA) was founded as a shell company on March 14, 1927 by Air Corps Majors Henry H. "Hap" Arnold, Carl A. Spaatz, and John H. Jouett as a counterbalance to the German-owned Colombian carrier SCADTA, operating in Colombia since 1920. SCADTA lobbied hard for landing rights in the Panama Canal Zone, ostensibly to survey air routes for a connection to the United States, which the Air Corps viewed as a precursor to a possible German aerial threat to the canal. Arnold and Spaatz drew up the prospectus for Pan American when SCADTA hired a company in Delaware to obtain air mail contracts from the US government. Pan American was able to obtain the US mail delivery contract to Cuba, but lacked any aircraft to perform the job and did not have landing rights in Cuba.

Juan Trippe formed the Aviation Corporation of the Americas (ACA) on June 2, 1927, with the backing of powerful and politically connected financiers who included Cornelius Vanderbilt Whitney and W. Averell Harriman, and raised $250,000 in startup capital from the sale of stock. Their operation had the all-important landing rights for Havana, having acquired American International Airways, a small airline established in 1926 by John K. Montgomery and Richard B. Bevier as a seaplane service from Key West, Florida, to Havana. ACA met its deadline of having an airmail service operating by October 19, 1927, by chartering a Fairchild FC-2 floatplane from a small Dominican Republic carrier, West Indian Aerial Express.