Pair of Portraits of Lou Gehrig and Ty Cobb - Autographs 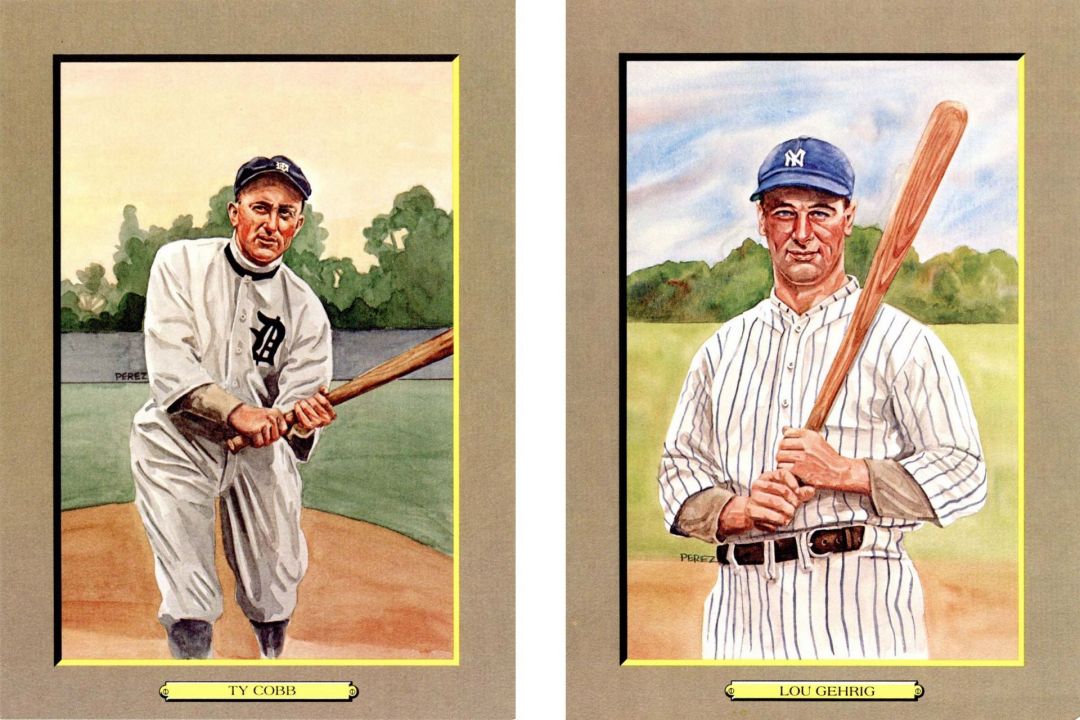 Pair of portrait cards of Lou Gehrig and Ty Cobb.

Henry Louis Gehrig (born Heinrich Ludwig Gehrig; June 19, 1903  June 2, 1941) was an American professional baseball first baseman who played 17 seasons in Major League Baseball (MLB) for the New York Yankees (19231939). Gehrig was renowned for his prowess as a hitter and for his durability, which earned him his nickname "the Iron Horse". He was an All-Star seven consecutive times, a Triple Crown winner once, an American League (AL) Most Valuable Player twice, and a member of six World Series champion teams. He had a career .340 batting average, .632 slugging average, and a .447 on base average. He hit 493 home runs and had 1,995 runs batted in (RBI). He still has the highest ratio of runs scored plus runs batted in per 100 plate appearances (35.08) and per 100 games (156.7) among Hall of Fame players. In 1939, he was elected to the Baseball Hall of Fame and was the first MLB player to have his uniform number (4) retired by a team.

A native of New York City and a student at Columbia University, Gehrig signed with the Yankees on April 29, 1923. He set several major-league records during his career, including the most career grand slams (23; since broken by Alex Rodriguez) and most consecutive games played (2,130), a record that stood for 56 years and was long considered unbreakable until surpassed by Cal Ripken Jr., in 1995. Gehrig's consecutive game streak ended on May 2, 1939, when he voluntarily took himself out of the lineup, stunning both players and fans, after his performance on the field became hampered by an undiagnosed ailment subsequently confirmed to be amyotrophic lateral sclerosis, an incurable neuromuscular illness; it is now commonly referred to in North America as "Lou Gehrig's disease".

The disease forced him to retire at age 36, and claimed his life two years later. The pathos of his farewell from baseball was capped off by his iconic 1939 "Luckiest Man on the Face of the Earth" speech at Yankee Stadium. In 1969, the Baseball Writers' Association of America voted Gehrig the greatest first baseman of all time, and he was the leading vote-getter on the MLB All-Century Team chosen by fans in 1999. A monument in Gehrig's honor, originally dedicated by the Yankees in 1941, currently resides in Monument Park at Yankee Stadium. The Lou Gehrig Memorial Award is given annually to the MLB player who best exhibits Gehrig's integrity and character.

Tyrus Raymond Cobb (December 18, 1886  July 17, 1961), nicknamed "the Georgia Peach", was an American Major League Baseball (MLB) center fielder. He was born in rural Narrows, Georgia. Cobb spent 22 seasons with the Detroit Tigers, the last six as the team's player-manager, and finished his career with the Philadelphia Athletics. In 1936, Cobb received the most votes of any player on the inaugural Baseball Hall of Fame ballot, receiving 222 out of a possible 226 votes (98.2%); no other player received a higher percentage of votes until Tom Seaver in 1992. In 1999, the Sporting News ranked Ty Cobb third on their list of "Baseball's 100 Greatest Players."

Cobb is widely credited with setting 90 MLB records during his career. His combined total of 4,065 runs scored and runs batted in (after adjusting for home runs) is still the highest ever produced by any major league player. He still holds several records as of the end of the 2019 season, including the highest career batting average (.366) and most career batting titles with 11 (or 12, depending on source). He retained many other records for almost a half century or more, including most career hits until 1985 (4,189 or 4,191, depending on source), most career runs (2,245 or 2,246 depending on source) until 200, most career games played (3,035) and at bats (11,429 or 11,434 depending on source) until 1974, and the modern record for most career stolen bases(892) until 1977. He still holds the career record for stealing home (54 times) and for stealing second base, third base, and home in succession (4 times), and as the youngest player ever to compile 4,000 hits and score 2,000 runs. Cobb ranks fifth all-time in number of games played and committed 271 errors, the most by any American League (AL) outfielder.

Cobb's legacy, which includes a large college scholarship fund for Georgia residents financed by his early investments in Coca-Cola and General Motors, has been somewhat tarnished by allegations of racism and violence, primarily stemming from a couple of mostly-discredited biographies that were released following his death. Cobb's reputation as a violent man was fanned by his first biographer, sportswriter Al Stump, whose stories about Cobb have been discredited as sensationalized, and have largely proven to be fictional. While he was known for often violent conflicts, he spoke favorably about black players joining the Major Leagues and was a well known philanthropist.