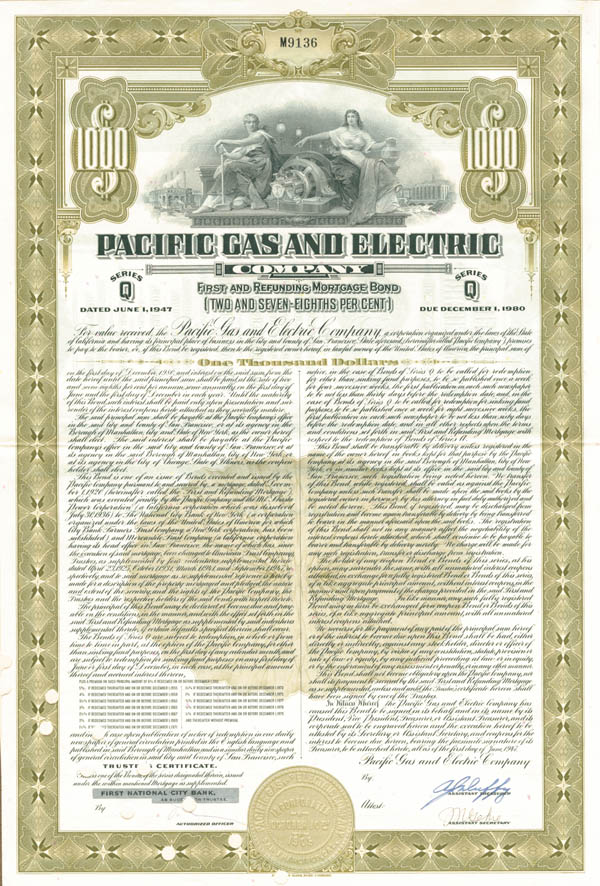 $1,000 Bond. Great vignette by American Bank Note Co. A very important company that has often been in the news in recent years. Please specify color.

The Pacific Gas and Electric Company (PG&E) is an American investor-owned utility (IOU) with publicly-traded stock. The company is headquartered in the Pacific Gas & Electric Building, in San Francisco, California, United States. PG&E provides natural gas and electricity to most of the northern two-thirds of California, from Bakersfield and the north side of Santa Barbara County, to near the state line with Oregon and Nevada, which represents 5.2 million households.

Overseen by the California Public Utilities Commission; PG&E is the leading subsidiary of the holding company PG&E Corporation, which has a market capitalization of $3.242 billion as of January 16, 2019. It was founded by George H. Roe after California's Gold Rush and by 1984 was the United States' "largest electric utility business". PG&E is one of six regulated, investor-owned electric utilities (IOUs) in California; the other five are PacifiCorp, Southern California Edison, San Diego Gas & Electric, Bear Valley Electric, and Liberty Utilities.

In 2018 and 2019, the company received widespread media attention when critics assigned the company primary blame for two separate devastating wildfires in California, leading to a loss in federal court and a formal finding of liability on their part. On January 14, 2019, PG&E announced that it was filing for Chapter 11 bankruptcy in response to the financial challenges associated with the catastrophic wildfires that it was liable for in Northern California that occurred in 2017 and 2018. The company hoped to come out of bankruptcy by June 30, 2020, and was successful on Saturday, June 20, 2020, when U.S. Bankruptcy Judge Dennis Montali issued the final approval of the plan for PG&E to exit bankruptcy.