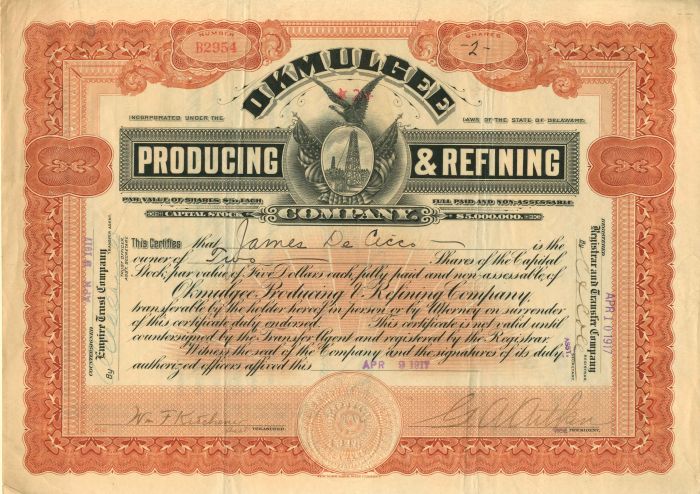 Okmulgee is a city in, and the county seat of, Okmulgee County, Oklahoma. The name is from the Mvskoke word okimulgee, which means "boiling waters". The site was chosen because of the nearby rivers and springs. Okmulgee is 38 miles south of Tulsa and 13 miles north of Henryetta via US-75.

Okmulgee has been the capital of the Muscogee (Creek) Nation since 1868, when it was founded following the Civil War. The Creek Nation began restoring order after that conflict. They had allied with the Confederacy during the war and needed to make a new peace treaty with the United States afterward as a result. They passed a new constitution and elected Samuel Checote as their first principal chief after the war.

In 1869, a post office (originally spelled Okmulkee) was established in the town, with Captain Frederick B. Severs appointed as the first postmaster. The name of the post office was officially changed to the present spelling on November 15, 1883. For seven years, beginning December 20, 1870, Okmulgee was the seat of government of all of what would become the State of Oklahoma, except for the Panhandle.

Okmulgee became a transportation center. The St. Louis, Oklahoma and Southern Railway (later absorbed by the St. Louis  San Francisco Railway or Frisco) reached Okmulgee in 1900; this route still remains and is now operated by the BNSF Railway. The Shawnee, Oklahoma and Missouri Coal and Railway (also later acquired by the Frisco) was built from Muskogee to Okmulgee in 1902-03, and lasted until abandoned in 1973. And, the shortline Coalton Railway, later called the Okmulgee Northern Railway, operated between Okmulgee and Deep Fork carrying coal from the producing areas around Schulter, Coalton and Dewar from 1916 to 1964.

The arrival of the railways triggered a building boom. By the time of Oklahoma statehood in 1907, the town had 2,322 residents and was named as the seat of Okmulgee County.

Coal mined in the Henryetta area and agriculture were the basis of the early economy. Discovery of oil at nearby Morris in 1907 stimulated expansion of Okmulgee, and attracted several new industries to town. These included three glass factories, a bottle factory, and foundry and machine shops. Five local refineries were operational by the early 1920s.

These industries were a catalyst for growth: The population was 4,176 in the 1910 census, but the city boomed to approximately 35,000 people during the 1920s. A newspaper article from this era claimed Okmulgee had more millionaires per capita than anyplace else in Oklahoma. The Okmulgee Chamber of Commerce has said the town had more millionaires per capita than any other place in the entire country.

But decreasing oil production and lower prices, the coming of the Great Depression, and other factors caused the population to shrink to 17,097 by the 1930 census. The population then remained relatively stable for a time, increasing slightly to 18,317 by the 1950 census. In the postwar period, there was an urbanization shift of population toward larger cities and their suburbs because of job opportunities, and the city's population has declined again. The population at the 2010 census was 12,321, a loss of 5.4 percent from the 2000 census figure of 13,022.