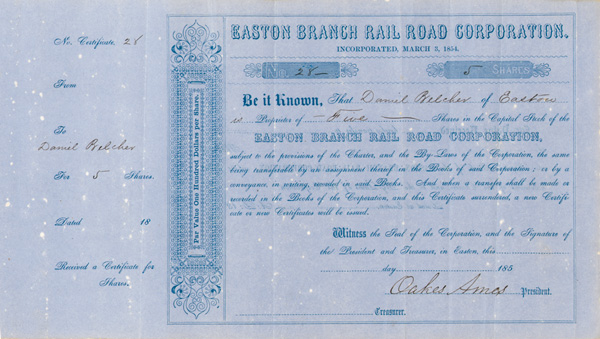 Oakes Ames (January 10, 1804  May 8, 1873) was an American businessman, investor, and politician. He was a member of the United States House of Representatives from Massachusetts. As a congressman, he is credited by many historians as being the single most important influence in the building of the Union Pacific portion of the transcontinental railroad. He is also noted for the subsequent scandal that alleged the improper sale of stock of the railroad's construction company.

Ames was born in Easton, Massachusetts, the son of Oliver Ames, Sr., a blacksmith who had built a business of making shovels, the Ames Shovel Shop, and became nicknamed "King of Spades". In his youth, he obtained a public school education and later worked in the family workshops to learn each step of the manufacturing process. He eventually became a partner in the business, and with his brother Oliver Ames, Jr. he established the firm Oliver Ames & Sons. Driven by the settlement of the Midwest, by the discovery of gold in California and Australia, as well as by railroad construction, the shovel manufacturing business boomed. During the Civil War, the firm prospered with contracts for swords, shovels, and other tools and implements. Ames made a large fortune.

He was influential in the establishment of the Republican Party in Massachusetts. In 1860, he became a member of the executive council of Massachusetts, and from 1863 to 1873 he served as a U.S. Congressman from the Second District of Massachusetts. In Congress, he became a member of the Committee on Railroads during the early building of the transcontinental railroad. In 1865, President Abraham Lincoln appealed to him to take control of the Union Pacific (UP) portion of the project, which had become mired down because of the war, and had built only 12 miles (19 km) of track.

Through his influence he obtained contracts for his family firm in the construction of the Union Pacific and staked nearly all the family's holdings as capitalization for the project. The contracts were later transferred to the Credit Mobilier Company of America after Ames ousted its founder Thomas Durant. His brother Oliver was appointed president of the UP in 1866. The railroad was completed in 1869.

In 1872, it was disclosed Ames sold shares in Credit Mobilier to fellow congressmen at a price greatly below the market value of the stock. The subsequent public scandal led to a House investigation, which formally recommended expulsion. On February 28, 1873, the House passed a resolution formally censuring Ames "in seeking to secure congressional attention to the affairs of a corporation in which he was interested, and whose interest directly depended upon the legislation of Congress, by inducing members of Congress to invest in the stocks of said corporation." Detractors referred to him as "Hoax Ames." Ames died soon afterward at North Easton, Massachusetts.

On May 10, 1883, the 14th anniversary of the completion of the railroad, the state legislature of Massachusetts passed a resolution exonerating Ames. His son Oliver Ames served as Governor from 1887 to 1890.

The contributions of Ames and his brother Oliver in the building of the Union Pacific are commemorated in the Oliver and Oakes Ames Monument at Sherman Summit, near Laramie, Wyoming, along the original route. The pyramidal monument was designed by famous architect Henry Hobson Richardson (who designed a number of projects for the Ames family) with sculpted plaques of the Ames brothers by Augustus Saint-Gaudens. At the time of its construction, the monument was located at the highest point attained by the UP's transcontinental route. With a change in the route of the railroad, the monument today is not on any major transportation route.

The city of Ames, Iowa is named for Oakes, as is likely the community of Ames, Nebraska. The public high school in Easton, Massachusetts is named Oliver Ames High School.

North Easton station is a former railroad station designed by noted American architect H. H. Richardson. It is located just off Oliver Street in North Easton, Massachusetts, and currently houses the Easton Historical Society. The station was built in 1881 and served commuter trains until 1958. It was added to the National Register of Historic Places in 1972 as Old Colony Railroad Station. In 1987, it also became part of the H. H. Richardson Historic District of North Easton, a National Historic Landmark District. The proposed Phase 2 of South Coast Rail would return commuter rail service to the location in 2030 as Easton Village station.

The Easton Branch Railroad opened from Stoughton to North Easton on May 16, 1855. Originally part of the Boston and Providence Railroad, it became part of the Dighton and Somerset Railroad in 1866.

A new station was commissioned in 1881 by Frederick Lothrop Ames, director of the Old Colony Railroad, during the same year that Richardson designed the Ames Gate Lodge for his nearby estate. Frederick Law Olmsted landscaped its grounds. It is a relatively small station, a single story in height with Richardson's characteristic heavy masonry and outsized roof. Its long axis runs north-south with the tracks, now disused, along its west side. The building is laid out symmetrically within, with a large passenger room at each end (one for women, the other for men).

The station's facade is constructed of rough-faced, random ashlar of gray granite with a brownstone belt course and trim. Two large, semicircular arches punctuate each of the long facades, inset with windows and doorways, and ornamented with carvings of a beast's snarling head; a further semicircular arch projects to form the east facade's porte-cochere. Eaves project deeply over all sides, supported by plain wooden brackets.

Commuter rail service past Stoughton was cut on September 5, 1958. In 1969, the Ames family purchased the property from the Penn Central Railroad and gave it to the historical society. It was added to the National Register of Historic Places in 1972. In 1987, it also became part of the H. H. Richardson Historic District of North Easton, a National Historic Landmark District.

A new MBTA Commuter Rail station, Easton Village, is proposed to be built at the site as part of the South Coast Rail project. An 800-foot-long (240 m) high-level platform will be constructed across the track from the historic building.