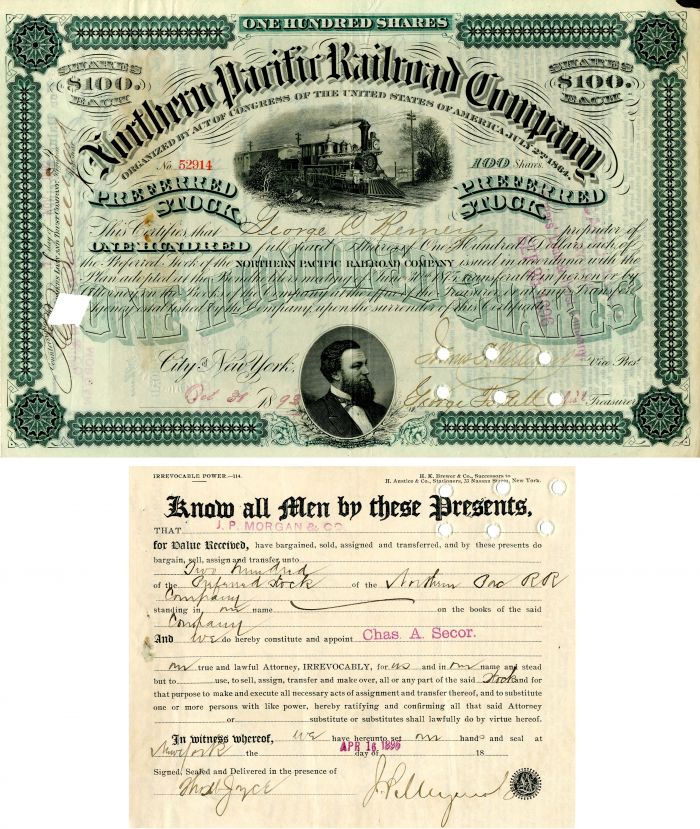 Stock signed at back on transfer by J.P. Morgan, Jr., son of Sr. Rare!

John Pierpont Morgan Jr. John Pierpont "Jack" Morgan, Jr. (September 7, 1867  March 13, 1943) was an American banker and philanthropist. He graduated from Harvard in 1886, where he was a member of the Delphic Club, formerly known as the Delta Phi, and Delta Kappa Epsilon. In 1890 Jack married Jane Norton Grew. The couple raised four children: Junius Spencer Morgan III; Henry Sturgis Morgan, a founding partner of Morgan Stanley; Jane Norton Morgan Nichols and Frances Tracy Pennoyer. A fifth child, Alice, died at a young age of typhoid fever. Morgan played a prominent part in financing World War I. Following its outbreak, he made the first loan of $12,000,000 to Russia. In 1915, a loan of $50,000,000 was made to France. The firm's involvement with British and French interests fueled charges the bank was conspiring to maneuver the United States into supporting the Allies in order to rescue its loans. By 1915 it became apparent the war was not going to end quickly, the company decided to forge formal relationships with France. Those dealings became strained over the course of the war as a result of poor personal relations with French emissaries, relationships that were heightened in importance by the unexpected duration of the conflict, its costs, and the complications flowing from American neutrality. Contributing to the tensions was the favoritism displayed by Morgan officials to British interests. From 1915 until sometime after the United States entered the war, his firm was the official purchasing agent for the British government, buying cotton, steel, chemicals and food, receiving a 1% commission on all purchases. Morgan organized a syndicate of about 2200 banks and floated a loan of $500,000,000 to the Allies. The British sold off their holdings of American securities and by late 1916 were dependent on unsecured loans for further purchases. At the beginning of World War I, US Treasury Secretary William McAdoo and others in the Wilson administration were very suspicious of J. P. Morgan & Co.'s enthusiastic role as British agent for purchasing and banking. When the United States entered the war, this gave way to close collaboration, in the course of which Morgan received financial concessions. From 1914 to 1919, he was a member of the advisory council for the Federal Reserve Bank of New York. On 3 July 1915, an intruder, Eric Muenter, entered Morgan's Long Island mansion and shot him twice in an attempt to assassinate him. This was ostensibly to bring about an embargo on arms, and in protest of his profiteering from war. Morgan, however, quickly recovered from his wounds. After World War I and the Versailles Treaty, Morgan Guaranty managed Germany's reparation payments. After the war, Morgan made several trips to Europe to investigate and report on financial conditions there. In 1919 he was for a time chairman of the international committee, composed of American, British and French bankers, for the protection of the holders of Mexican securities. In November 1919, he was made a director of the Foreign Finance Corporation, which was organized to engage in the investment of funds chiefly in foreign enterprises. By the 1920s, Morgan Guaranty had become one of the world's most important banking institutions, as a leading lender to Germany and Europe. He worked extremely hard to defeat Franklin D. Roosevelt's plan for the New Deal during The Depression, and secured about US$100 million in loans to Italian dictator Benito Mussolini prior to World War II. He was a director in numerous corporations, including the U.S. Steel Corp., the Pullman Co., the Aetna Insurance Co., and the Northern Pacific Railway Co.