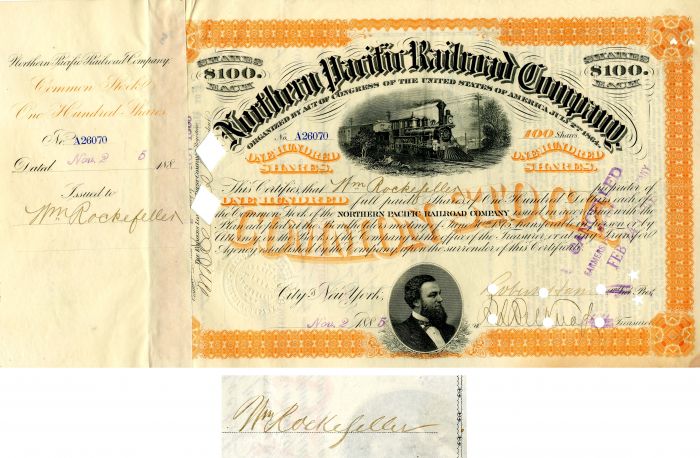 Stock issued to and signed by Wm. Rockefeller on back.

He was born in Richford, New York and in 1853 his family moved to Strongsville, Ohio. He was to later build an ostentatious mansion called "Rockwood Hall", now demolished, which was subsequently located within the Rockefeller family estate of "Pocantico", in Westchester County New York.

In 1865, he entered the oil business by starting a refinery. In 1867, his brother's company, Rockefeller & Andrews, absorbed this refinery, and in 1870, the company became Standard Oil. William Rockefeller built Standard Oil's vast export business in New York and was responsible for that entire operation. In 1872, he played an instrumental role in settling the battles between the refiner's combinations and the crude oil producers. During this time, he formed close alliances with many of the East's most important oil men such as Henry H. Rogers and Charles Pratt, eventually bringing them into Standard Oil. William was a trustee of the Standard Oil Trust until its dissolution in 1890.

Rockefeller, along with Henry Rogers, devised a deceptive scheme which made them a profit of $36 million. First, they purchased Anaconda Properties from Marcus Daly for $39 million, with the understanding that the check was to be deposited in the bank and remain there for a definite time (National City Bank was run by Rockefellers friends). Rogers and Rockefeller then set up a paper organization known as the Amalgamated Copper Company, with their own clerks as dummy directors, saying the company was worth $75 million.

Married to Almira Geraldine Goodsell, he built up the National City Bank of New York, now part of Citigroup. He had 6 children. Upon his death in 1922, he left a fortune estimated at between $150 million and $200 million.