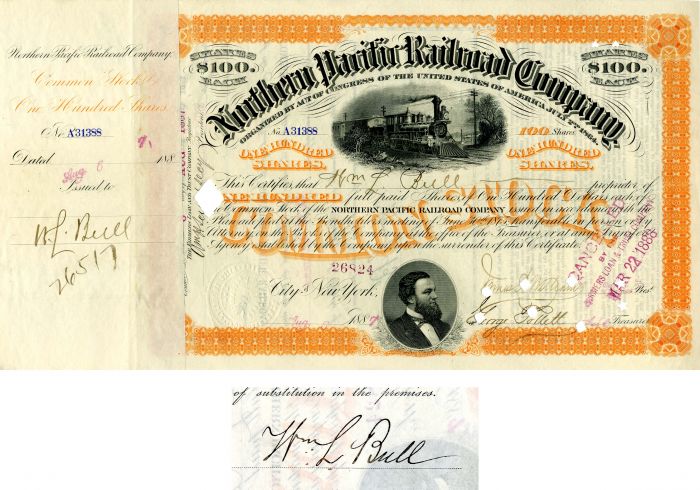 Stock issued to and signed on back by Wm. L Bull.

His paternal grandparent were Elizabeth (née Atwater) Bull and Jireh Bull (a descendant of Rhode Island Governor Henry Bull) and his maternal grandparents were Peter Lanman and Abigail (née Trumbull) Lanman (a daughter of U.S. Representative and Connecticut governor Joseph Trumbull). Through his mother, he was a first cousin of scholar Charles Rockwell Lanman.

After receiving a preparatory education, he studied at the College of the City of New York, where he graduated in 1864.

After graduation, Bull began his business career by joining Edward Sweet & Co., a banking house founded in 1854 (with offices at the southwest corner of Wall and Broad Street) where his brother-in-law was the senior partner. In 1867, he became a partner, a position he held uninterruptedly for over forty-five years. The prominent firm became known as "a Vanderbilt and Rockefeller house" and E. H. Harriman did business for the firm when he was a broker. Bull served as a director of several companies, including the Northern Pacific Railway, the East Tennessee, Virginia and Georgia Railway, the New York, Susquehanna and Western Railway, and the Atchison, Topeka and Santa Fe Railway.

In 1869, Bull joined the New York Stock Exchange and was "one of fifty brokers who secured his membership for $1,000 a piece when the Stock Exchange was consolidated with the gold board." He later became a member of the Exchange's board of governors and in May 1888, he was elected president of the Exchange, and served two terms until he was succeeded by Watson B. Dickerman in 1890.

He retired from business in 1908. Shortly after his death, Edward Sweet & Co., which was then at 34 Pine Street, was dissolved and its business taken over by Chandler Brothers & Co. of New York and Philadelphia. Sweet partner Lewis E. Waring became a partner in Chandler, although his fellow partners Frederic Bull (his son) and Louis Livingston (his daughter-in-law's brother) did not.