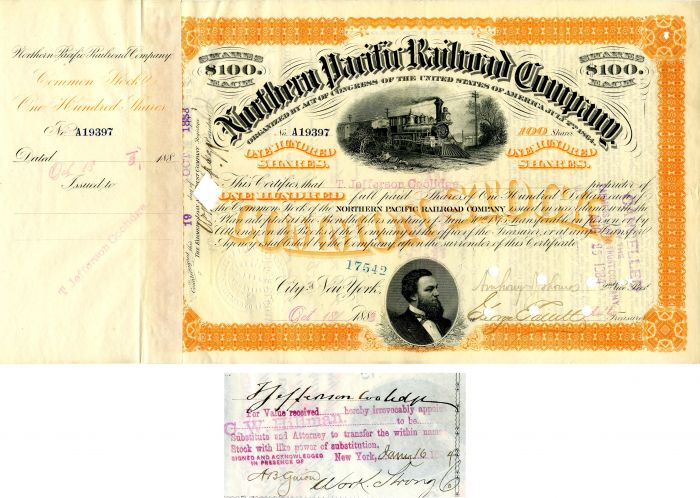 Stock issued to and signed on back by T. Jefferson Coolidge.

Thomas Jefferson Coolidge (August 26, 1831  November 17, 1920) was a leading Boston businessman. Coolidge was born to a Joseph Coolidge (17981879) and Eleonora Wayles (née Randolph) Coolidge (17961876). He was the brother of Ellen Coolidge Dwight (18261894), Joseph Randolph Coolidge (18281925), Philip Sidney Coolidge (18301863), and Algernon Sidney Coolidge (18301912). He was born to a prominent Boston Brahmin family and was a great-grandson of the 3rd United States President Thomas Jefferson, through his maternal grandparents, Thomas Mann Randolph Jr. and Martha Jefferson Randolph. His uncles were Thomas Jefferson Randolph, George Wythe Randolph, Andrew Jackson Donelson, His father was a distant relative of Calvin Coolidge. He was an uncle to Archibald Cary Coolidge (18661928) through his older brother, Joseph Randolph Coolidge. Coolidge was educated in private schools in Europe, and graduated from Harvard in 1850. Coolidge was involved in numerous textile mills, and banks. In 1853, he formed a partnership with Joseph Peabody Gardner, the father of U.S. Representative Augustus Peabody Gardner, in the East India trade. In 1875, he became the manager of the largest textile mill in America, the Amoskeag Mill in Manchester New Hampshire. Coolidge turned his attention to financing the rapidly growing industrial economy, with major interests in textiles banking, railroads, publishing and electricity. In 1880, he ended his manufacturing career and "took up railroading." Coolidge served as president of the Atchison, Topeka and Santa Fe Railway. In the early 1890s he retired from the railroads and returned to the Amoskeag Company, becoming president in 1898. He organized the United Fruit Company, of which his son, Thomas J. Coolidge, Jr., was president. Coolidge was involved in numerous civic enterprises Boston area, especially the design of the region's park system. A Republican, he was appointed by Benjamin Harrison to succeed Whitelaw Reid as United States Ambassador to France on May 12, 1892, a role his great-grandfather had held from May 1785 to September 1789. Coolidge presented his credentials on June 10, 1892 and he presented his recall on May 4, 1893, terminating his mission. In 1898 and 1899, he was a member of the American delegation to the commission to resolve the Alaska boundary dispute. Historian Ernest May says Coolidge was, "a prototype member of what today we call the foreign policy establishment." Coolidge donated the Grand Army Hall and a public library to the town of Manchester-by-the-Sea, Massachusetts that cost more than $40,000. At Harvard, where he was an overseer from 1886 to 1897, he donated the Jefferson Research Laboratory and a chemical laboratory for quantitative analysis (as a memorial to his son), which all together cost over $165,000. In 1889, he gave another $5,000 to Harvard to be used as a prize for intercollegiate debates. In 1898, Coolidge donated a collection of Thomas Jefferson's personal papers to the Massachusetts Historical Society in Boston. The collection contained more than 8,000 items: Correspondence, including 3,280 letters that Jefferson had written and 4,630 letters that he had received; Jefferson's garden book (1766-1824) and farm book (1774-1824); annotated almanacs from 1771-1776; account books for 1783-1790; manuscript expense accounts from 1804-1825; notes on the weather spanning the years 1782-1826; plans of American forts in 1765; law treatises, 1778-1788; legal papers, 1770-1772; and Jefferson's 1783 catalog of his personal library.