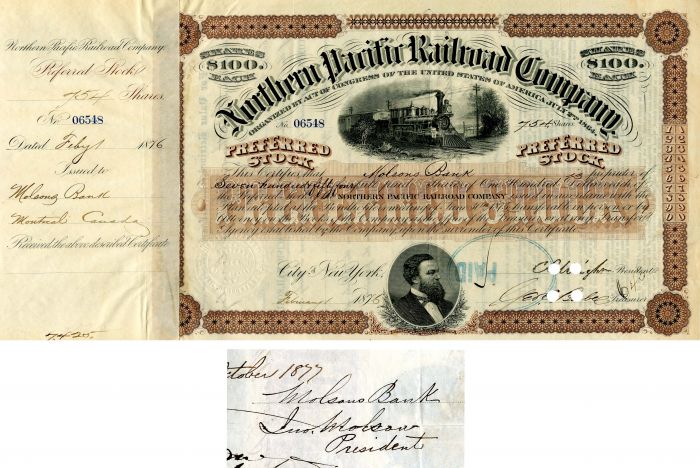 Stock issued to Molsons Bank and signed on back by ? Molson, president.

John Molson (December 28, 1763  January 11, 1836) was an English-born brewer and entrepreneur in colonial Quebec, which during his lifetime became Lower Canada. In addition to founding Molson Brewery, he built the first steamship and the first public railway in Canada, was a president of the Bank of Montreal, and established a hospital, a hotel, and a theatre in Montreal. The dynasty he founded, the Molson family, is still a wealthy and powerful force in Canada.

John Molson was born in 1763, in the parish of Moulton near Spalding, Lincolnshire, England. His father John Molson senior (17301770) had, in 1760, married Mary Elsdale (17391772), the eldest daughter of Samuel Elsdale (17041788), of Surfleet. Her brother, Robinson Elsdale (17441783), was a privateer, whose unpublished exploits formed the basis of the novel by Frederick Marryat, The Privateersman (1846). Before the marriage, John Molson senior inherited a property known as Snake Hall, in Moulton Eaugate which consisted of a house and various outbuildings associated with 38 acres (15 ha) of land.

John Molson senior died on June 4, 1770. His will bequeathed properties to his wife and five surviving children. Under their marriage settlement, Snake Hall went to Mary, and was to then pass on to his eldest son, John, upon her death. She died on September 21, 1772, and thus John was orphaned when eight years old. John senior had named four guardians and trustees for the estate; the young John Molson's financial affairs were overseen by his paternal uncle, Thomas Molson, but in September 1771 Thomas turned over the duties of trustee and guardian to Samuel Elsdale, possibly due to poor health, as he died the following spring. Under Samuel Elsdale's oversight, Snake Hall was rented out to the benefit of their trusts. John went to live with a man named William Robinson, and at age 12 in 1776 was consigned to the care of a Mr Whitehead, who was paid for his board and education until 1780, when he turned 16. Writers have criticized Samuel Elsdale for his oversight but he seems to have performed his duties prudently, although John Molson plainly chafed under his guardianship.

In 1782, at the age of 18, Molson immigrated to Quebec, in a ship that was leaking so badly he switched ships mid-ocean. In 1783, Molson moved into the home of Thomas Loid just outside Montreal, who had begun brewing beer the previous year. Molson became a partner in the brewery and took over on 5 January 1785, eight days after he had turned twenty-one. In 1786, he returned briefly to England, and it was during that year that Molson picked up the book Theoretic Hints on an Improved Practice in Brewing by John Richardson. Molson returned to Quebec with more money and a new mindset. Many Loyalists were immigrating to Quebec from the United States and this influx increased the demand for beer. Molson worked hard, staying up long into the night. He hired an apprentice, Christopher Cook, and a loyalist housemaid, Sarah Insley Vaughan. He married her on 7 April 1801 at Christ Church in Montreal after she had borne him three children.[9]

Sarah (17511829) was the daughter of Thomas Vaughan of Harnham Hall, Morpeth, Northumberland. She was the niece of Wilmot Vaughan, 1st Earl of Lisburne and through her mother's family, the Aynsleys, a cousin of the Duke of Atholl. She emigrated to the American colonies with her first husband, David Tetchley, but ten years later left him, and reverting to her maiden name, she made her way to Montreal, penniless, until taken in by Molson.

Soon Molson's beer was in such demand that according to one of his diary entries "Cannot serve half my customers and they are increasing every day." One of the major reasons for this was the wide appeal of his beer to different classes of Montreal society. High British officers had been drinking imported London porters and the city merchants preferred Bristol.[citation needed] Yet Molson's beer was special as it was "universally liked" (a quotation from Molson's diary). It was at the Anglican church that he met many influential and wealthy businessmen like fur trader James McGill, Joseph Frobisher, founder of the North West Company, and Alexander Mackenzie.