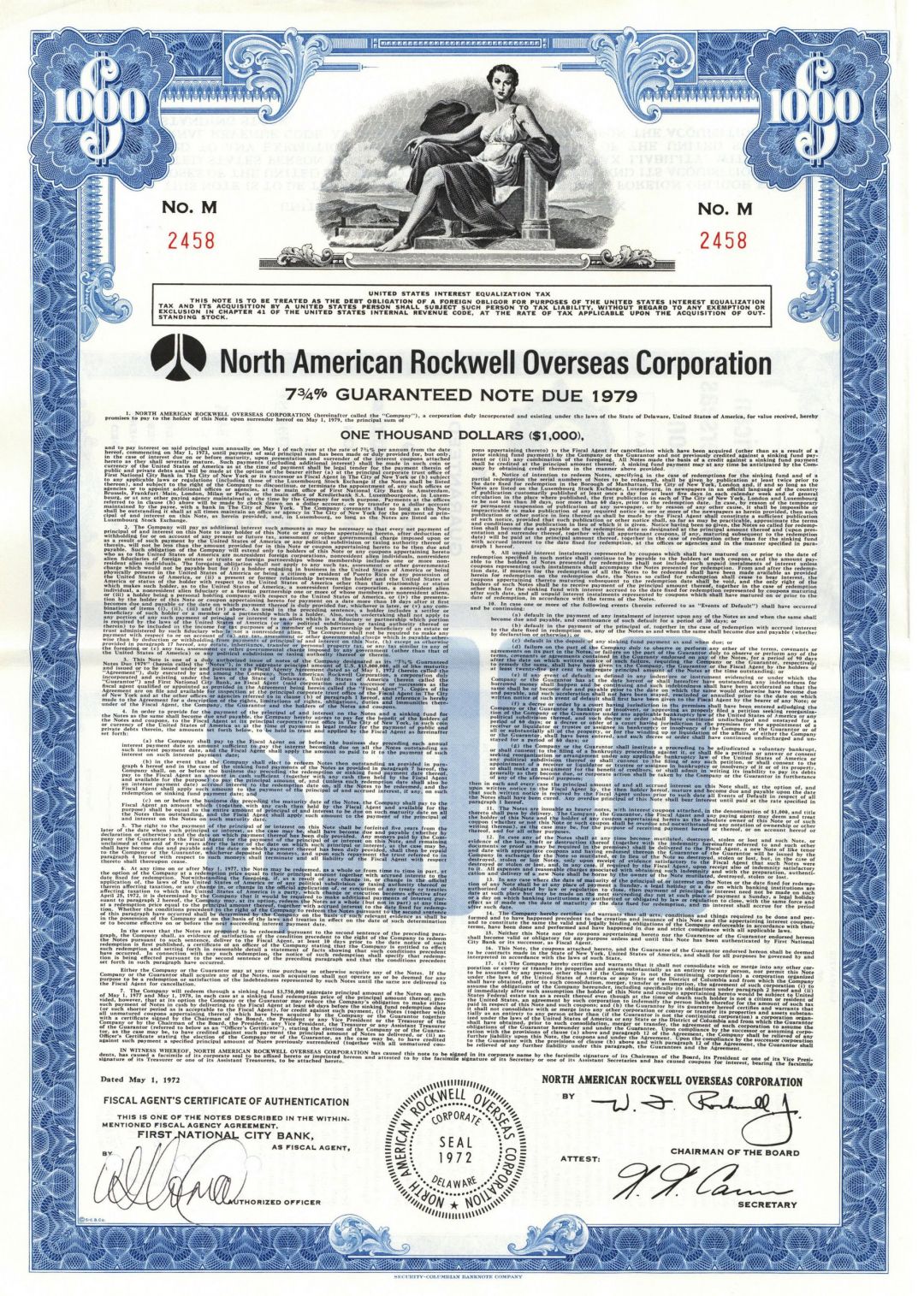 Boston-born Willard Rockwell (18881978) made his fortune with the invention and successful launch of a new bearing system for truck axles in 1919. He merged his Oshkosh, Wisconsin-based operation with the Timken-Detroit Axle Company in 1928, rising to become chairman of its board in 1940.

In 1956, Rockwell Manufacturing Co. bought Walker-Turner from Kearney and Trecker. In 1957, Walker-Turner operations were closed down in Plainfield, New Jersey and moved to Bellefontaine, Ohio and Tupelo, Mississippi.

Timken-Detroit merged in 1953 with the Standard Steel Spring Company, forming the Rockwell Spring and Axle Company. After various mergers with automotive suppliers, it comprised about 10 to 20 factories in the Upper Midwestern U.S. and southern Ontario, and in 1958 renamed itself Rockwell-Standard Corporation.

Pittsburgh-based Rockwell Standard then acquired and merged with Los Angeles-based North American Aviation to form North American Rockwell in September 1967. It then purchased Miehle-Goss-Dexter, the largest supplier of printing presses, and in 1973, acquired Collins Radio, a major avionics supplier.

In 1968, Sterling Faucet Company was bought by Rockwell Manufacturing Co. and it became a subsidiary of the company.

Joining the Pittsburg-based Rockwell Manufacturing Company in 1968 as Corporate Director Quality Assurance, Michael W. Hodges also served as Corporate Director Manufacturing and later as CEO and Geschäftsführer (Managing Director) of the German-based Engine Division. He was appointed member of the Board of Directors of Rockwell GMBH Germany and Dikkers Valve Products LLC Netherlands. Prior to Rockwell, Michael Hodges was a physicist with NASA and aerospace management with Martin-Marietta Corp. in Orlando, Fl. During Hodges 7 years with Rockwell there were approximately 90,000 employees in 7 divisions: the Valve Division with products for the gas and oil industry with pants located in Barberton, Ohio, Raleigh, NC, Sulfur Springs, Tx., and Kearney, Nebraska, the Gas Products Division of meters and regulators in Dubois, Pa, the Municipal Water Meter Division in Uniontown, Pa., the Power Tool Division in Syracuse, NY, Jackson, Tenn., Tupelo, Miss., and Columbia, SC, the Transportation Division in Atchison, Kansas with a large steel foundry of products for the automotive, railway and rapid-transit industry, , the Sterling Faucet Division in Reedsville, WV, and the Engine Division in Pinneberg, Germany (ILO-Motorenwerke GMBH, founded 1911, acquired by Rockwell in 1959), manufacturing 2-cycle gas-driven motors for developing nation products including motor tillers, water pumps, sprayers, cement mixers, tampers and mopeds as well as snowmobile- and all-terrain vehicle engines for North America. After arrival at the Engine Division's ILO-Motorenwerke factory in Pinneberg, Michael Hodges recognized thousands of dedicated long-serving German employees - such that instead of slowly closing down the troubled engine business as ordered by headquarters, to instead find a way to save it  and it was saved, with rising profit and free of all debt. Following a 3-year turn-around of the German Engine Division and the Dikkers Valve Product Company in Hengelo, Netherlands, in 1974 Michael Hodges was offered promotion to CEO of both the Engine Division and the Transportation Division - which he declined to accept and resigned out of concern for a major change in Rockwells future business model toward aerospace products, away from the model established since 1945 by founder, Willard Rockwell of strong industrial product businesses.

A significant different direction was planned starting in 1973 away from the business model developed since 1945 by the founder, Willard Rockwell (18881978). The founders son, Willard Rockwell Jr., appeared taking the company in a new direction, replacing the founders model of strong medium-size manufacturing companies with diverse industrial products with strong industrial engineering and quality control in multiple locations  to a new model leveraging assets of the profitable 7 manufacturing divisions of Rockwell Manufacturing Company into a new business model of a dominant government-serving (NASA, Defense Dept.) aerospace company, named Rockwell International, which included North American Aviation, of products such as the Space Shuttle. By the end of the 1980s Rockwell International begin to sell-off its prior industrial product manufacturing divisions, starting with the Valve Division, leading to the sale of all divisions and the end of the Rockwell names > Rockwell Manufacturing Company, North American Rockwell and Rockwell International

In 1973, North American Rockwell merged with Rockwell Manufacturing, run by Willard Rockwell Jr., to form Rockwell International. In the same year, the company acquired Admiral Radio and TV for US$500 million. In 1979, the appliance division was sold to Magic Chef.

Rockwell International also drew on the strengths of several of George Westinghouse's concerns, and Westinghouse is considered a co-founder of the company.

With the death of company founder and first CEO Willard F. Rockwell in 1978, and the stepping down of his son Willard Rockwell Jr. in 1979 as the second CEO, Bob Anderson became CEO and led the company through the 1980s when it became the largest U.S. defense contractor and largest NASA contractor. Rockwell acquired the privately held Allen-Bradley Company for US$1.6 billion in February 1985  US$1 billion of which was cash  and became a producer of industrial automation hardware and software.

During the 1980s, Anderson, his CFO Bob dePalma, and the Rockwell management team built the company to #27 on the Fortune 500 list. It boasted sales of US$12 billion, roughly US$32 billion in 2019, and assets of over US$8 billion, roughly US$21 billion in 2019. Its workforce of over 115,000 was organized into nine major divisions  Space, Aircraft, Defense Electronics, Commercial Electronics, Light Duty Automotive Components, Heavy Duty Automotive Components, Printing Presses, Valves and Meters, and Industrial Automation. Rockwell International was a major employer in Southern California, northern Ohio, northern Georgia, eastern Oklahoma, Michigan, west Texas, Iowa, Illinois, Wisconsin, and western Pennsylvania.

Anderson stepped down as CEO in February 1988, leaving the company to president Donald R. Beall. The completion of the Space Shuttle program and the completion of the B-1 bomber program had led to a decline in revenues, and Beall sought to diversify the company away from government contracts. The end of the Cold War and the perceived "peace dividend", however, prompted accelerated divestitures and sweeping management reforms. From 1988 to 2001 the company moved its headquarters four times: from Pittsburgh, Pennsylvania where it had been for decades to El Segundo, California to Seal Beach, California to Costa Mesa, California to Milwaukee, Wisconsin.

At the end of the 1980s, the company sold its valve and meter division, formerly Rockwell Manufacturing, to British Tyre & Rubber. Although Rockwell was the #1 Defense and NASA contractor, the "peace dividend" perceived after the fall of the Soviet bloc, led the company to sell its defense and aerospace business, including what was once North American Aviation, the Defense Electronics Division and Rocketdyne, to Boeing Integrated Defense Systems in December 1996. In the 1990s, the company spun off its semiconductor products as Conexant Technologies (CNXT), later bought by Synaptics in 2017. Rockwell International also spun off its two automotive divisions (light vehicles division and heavy vehicles division) as one publicly traded company, Meritor Automotive, based in Troy, Michigan, which then merged with Arvin Industries to form Arvin Meritor. That company is now known as Meritor, Inc. In 1996, Rockwell International sold Graphic Systems (formerly Miehle-Goss-Dexter), an Illinois-based newspaper and commercial printing press manufacturer, to its internal management team Stonington Partners as part of a new corporation for US$600 million.

At the end, the result had been four spin-offs and three sales combined from Rockwell's nine divisions.

The various Rockwell companies list a large number of firsts in their histories, including the World War II-era P-51 Mustang fighter and the B-25 Mitchell bomber, and the Korean War-era F-86 Sabre fighter jet, as well as the Apollo spacecraft, the B-1 Lancer bomber, the Space Shuttle orbiter, and most of the Navstar Global Positioning System satellites.

Rocketdyne, which had been spun off by North American in 1955, was re-merged into Rockwell, and by that time produced most of the rocket engines used in the United States. Rockwell also purchased the Aero Design and Engineering Company from William and Rufus Travis Amis. Rockwell redesigned the company's Aero Commander aircraft, introducing its new design as the Rockwell Commander 112 and Commander 114.

The company developed a desktop calculator based on a MOSFET chip for use by its engineers. In 1967 Rockwell set up its own manufacturing plant to produce them, starting North American Rockwell MicroElectronics Corp. (called NARMEC). This would later become Rockwell Semiconductor. One of its major successes came in the early 1990s when it introduced the first low-cost 14.4 kbit/s modem chipset, which was used in a huge number of modems.

Collins radios were fitted to 80% of the airliners which were based in First World Countries. Collins designed and built the radios that communicated the Apollo moon landings and the high frequency radio network that allows worldwide communication with U.S. military aircraft. Rockwell's Rocketdyne division designed and built the third stage of the Minuteman intercontinental ballistic missile, and the Advanced Inertial Reference Sphere inertial navigation system that provided its navigation. It also built inertial navigation systems for the fleet of ballistic missile submarines.

In addition to the manufacture of nuclear missiles and bombers, Rockwell also produced key components of the bombs they carried, including plutonium triggers at the Rocky Flats Plant in Colorado. Rockwell ran the weapons plant from 1975 to 1990.

Rockwell built heavy-duty truck axles and drive-trains in the U.S., along with power windows, seats and locks. The Rockwell Tripmaster trip recording system for commercial vehicles was released along with the Logtrak module for DOT log recording for fleets who successfully petitioned the DOT for paper logbook exemptions. Rockwell also built yachts and business jets and owned large amounts of real estate.

It was also involved in providing custom electronic intelligence equipment to the Imperial Iranian Air Force as part of Project Ibex and paid bribes to the Shah of Iran in order to secure contracts there.

The laboratory did independent contract research for the U.S. Government, and also provided research services for the company's business units. It was famous for its research in: advanced materials, particularly ceramics; for its infrared imagers; for its research in liquid-crystal displays; and for its high-speed electronics. The laboratory invented Metalorganic vapour-phase epitaxy (MOVPE), also commonly known as Metal Organic Chemical Vapor Deposition (MOCVD). It also achieved fame in selected areas of information science, notably human-computer interaction, augmented reality, multimedia systems, and diagnostics. Rockwell Science Center led the United States Army Research Laboratory's Advanced Displays Federated Laboratory Consortium in the late 1990s. In 2000, the infrared imaging division of the laboratory moved into a new building in Camarillo, California.

After Rockwell International's breakup in 2001, the laboratory was spun off as a semi-autonomous company called Rockwell Scientific, half owned by Rockwell Collins and half owned by Rockwell Automation. In 2006, the main laboratory and infrared imaging division were sold to Teledyne Corporation. Teledyne made the laboratory complex in Thousand Oaks into its corporate headquarters. A reduced but active research and development operation continues there, under the name Teledyne Scientific & Imaging, LLC.