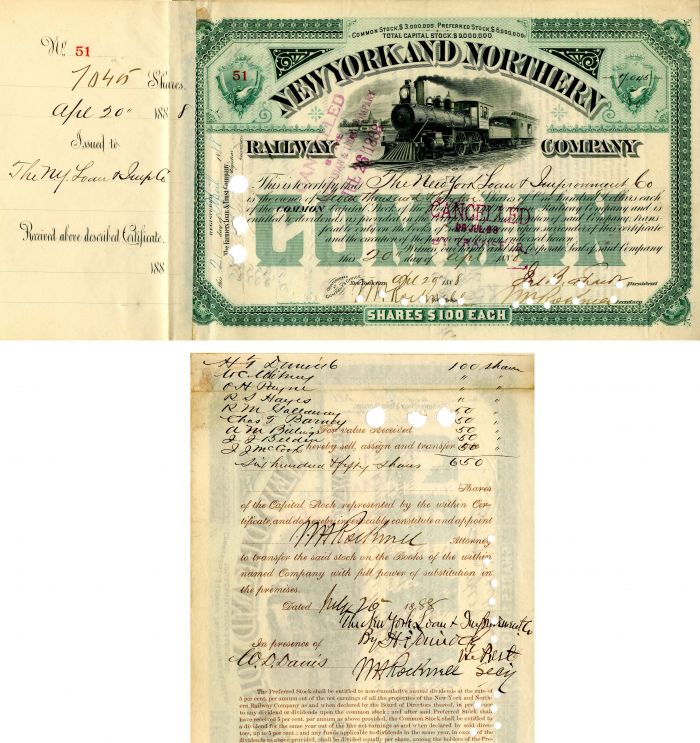 Stock transferred to W.C. Whitney and possibly other "greats".

W. C. Whitney (1841-1904) An American political leader and financier and founder of the prominent Whitney family.

William Whitney was born at Conway, MA of Puritan stock. He graduated from Yale University in 1863 then studied law at Harvard, and practised with success in New York City. He was an aggressive opponent of the Tweed Ring, and was actively allied with the anti-Tammany organizations, the Irving Hall Democracy of 1875-1890, and the County Democracy of 1880-1890, but upon the dissolution of the latter he became identified with Tammany.

In 1875-1882, he was corporation counsel of New York, and as such brought about a codification of the laws relating to the city, and successfully contested a large part of certain claims, largely fraudulent, against the city, amounting to about $20 million, and a heritage from the Boss Tweed regime.

In 1883, he became involved in a bitter struggle for control of the Broadway Railroad company, eventually gaining control by entering into an alliance with Thomas Fortune Ryan and Peter A. B. Widener. Whitney remained active in street railway affairs until his appointment as Secretary of the Navy (1885-89), in which post he was instrumental in the rebuilding of Americas naval forces.

During President Cleveland's first administration (1885-1889), Whitney was United States Secretary of the Navy and did much to develop the United States Navy, especially by encouraging the domestic manufacture of plate armor.

In 1892, he was instrumental in bringing about the third nomination of Cleveland, and took an influential part in the ensuing presidential campaign. In 1896, however, disapproving of the "free-silver" agitation, he refused to support his party's candidate, William Jennings Bryan. Whitney took an active interest in the development of public transport in New York, and was one of the organizers of the Metropolitan Street Railway Company. He was also interested in thoroughbred horse racing and established a racing operation with a string of race horses, competing against the successful stable of business associate, James R. Keene. A breeder of twenty-six American stakes winners, in 1901, Whitney won England's Epsom Derby with Volodyovski, leased by him from Lady Meux.