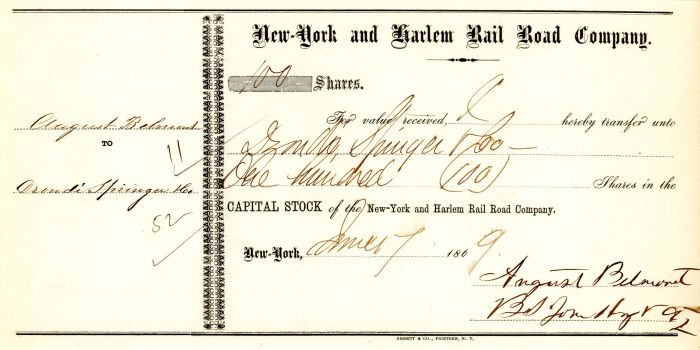 August Belmont (1813-1890) August Belmont, Sr. immigrated to New York City in 1837 after becoming the American representative of the Rothschild family's banking house in Frankfurt. He attended the Jewish Junior and Senior High School in Frankfurt until he began his apprentice for the Rothschilds. He would sweep floors, polish furniture, and run errands for the Rothschilds, while also studying English, arithmetic, and writing. During the Panic of 1837, nearly 250 businesses, including the Rothschild agents, had collapsed. As a result, Belmont began the August Belmont & Company, believing that he could replace the defunct American Agency with his company. It was an instant success, and Belmont was able to straighten out the Rothschild interests in the United States between 1837 and 1842. In 1844, Belmont was named the consul-general of Austria at New York in an attempt to strengthen his business position. He resigned in 1850 in response to what he viewed as Austria's cruel treatment of Hungary. After marrying Caroline Slidell Perry on November 7, 1849 as well as becoming a U.S. citizen, his wife's uncle John Slidell became interested in Belmont, a Democrat, unlike most of his business acquaintances, saw him as an able and enthusiastic protégé. Belmont was originally asked by Slidell to campaign for James Buchanan. Belmont accepted, although Franklin Pierce ended up winning the nomination. Belmont later supported Pierce and gave him large contributions despite being on the receiving end of political attacks. After Pierce's victory in the 1852 election, he appointed Belmont chargé d'affaires for the United States, as well as the American minister at the same place due to his generous contributions to Pierce's campaign. As a delegate to the Democratic Convention of 1860, he supported Stephen A. Douglas. He was named the Chairman of the Democratic National Committee the same year in Baltimore. He energetically supported the Union cause during the Civil War, and exerted a strong influence in favour of the North upon the merchants and financiers of England and France. An avid sportsman, the famed Belmont Stakes thoroughbred horse race is named in his honor. Also named in his honor is the town of Belmont, New Hampshire - an honor Mr. Belmont never acknowledged. He died in New York in 1890 and a volume entitled Letters, Speeches and Addresses of August Belmont (the elder) was published at New York. He left between 10 and 50 million dollars for his wife and children.