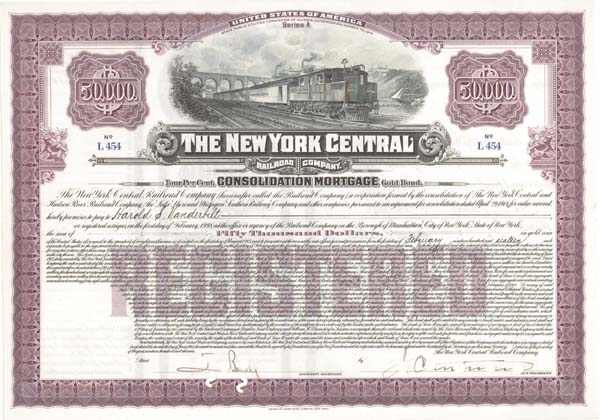 Harold S. Vanderbilt (1884-1970), Executive in the management of the New York Central lines. In World War I, he was a lieutenant in the U.S. Naval Reserve. He was very successful in yachting, skipper of the American yacht in three international cup contests, he sailed the Enterprise in 1930 to beat Sir Thomas Liptons Shamrock V, sailed the Rainbow in 1934 to beat T. O. M. Sopwiths Endeavour II, and the Ranger in 1937 to beat T. O. M. Sopwiths Endeavour II. This very high denomination $50,000 bond of the New York Central dated 1916 is issued to Harold S. and has a nice uncancelled signature at back. Gorgeous graphics, beautiful purple color by American Bank Note Co.-NY. Very Rare! Excellent Condition.
The New York Central Railroad (AAR reporting marks NYC), known simply as the New York Central in its publicity, was a railroad operating in the Northeastern United States. Headquartered in New York, the railroad served most of the Northeast, including extensive trackage in the states of New York, Pennsylvania, Ohio, Michigan, Indiana, Illinois and Massachusetts, plus additional trackage in the Canadian provinces of Ontario and Quebec. Its primary connections included Chicago and Boston. The NYC's Grand Central Terminal in New York City is one of its best known extant landmarks. In 1968 the NYC merged with its former rival, the Pennsylvania Railroad, to form Penn Central (the New York, New Haven and Hartford Railroad joined in 1969). That company soon went bankrupt and was taken over by the federal government and merged into Conrail in 1976. Conrail was broken up in 1998, and portions of its system was transferred to the newly-formed New York Central Lines LLC, a subsidiary leased to, and eventually absorbed by CSX. That company's lines included the original New York Central main line, but outside that area it included lines that were never part of the NYC system.
Condition: Excellent

Item ordered may not be exact piece shown. All original and authentic.
Email this to a friend
Request Info
Previous Item (Cairo and Norfolk Railroad Company Bond - Only 1 Available)    (Group of three $10,000 Railroad Bonds) Next Item