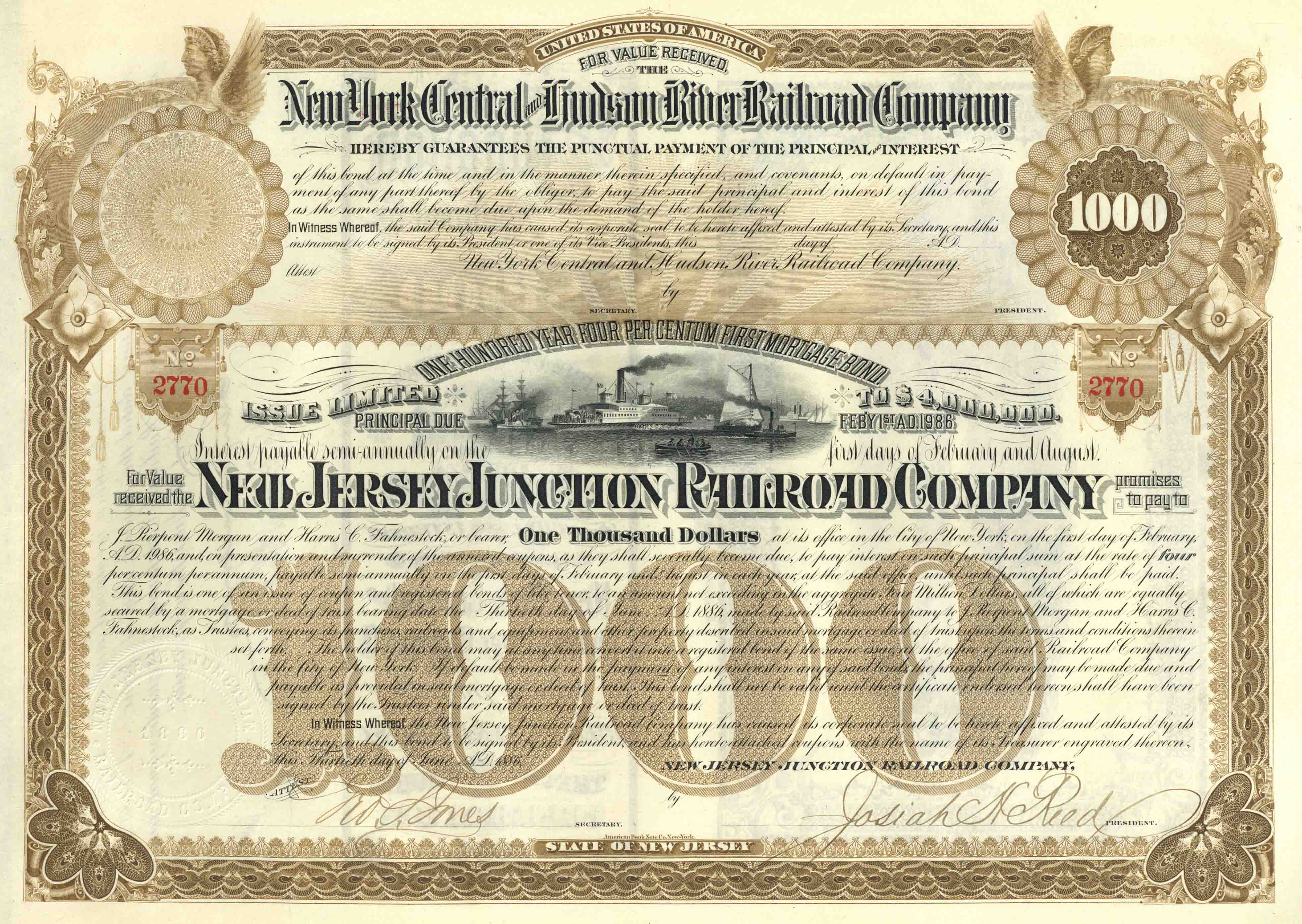 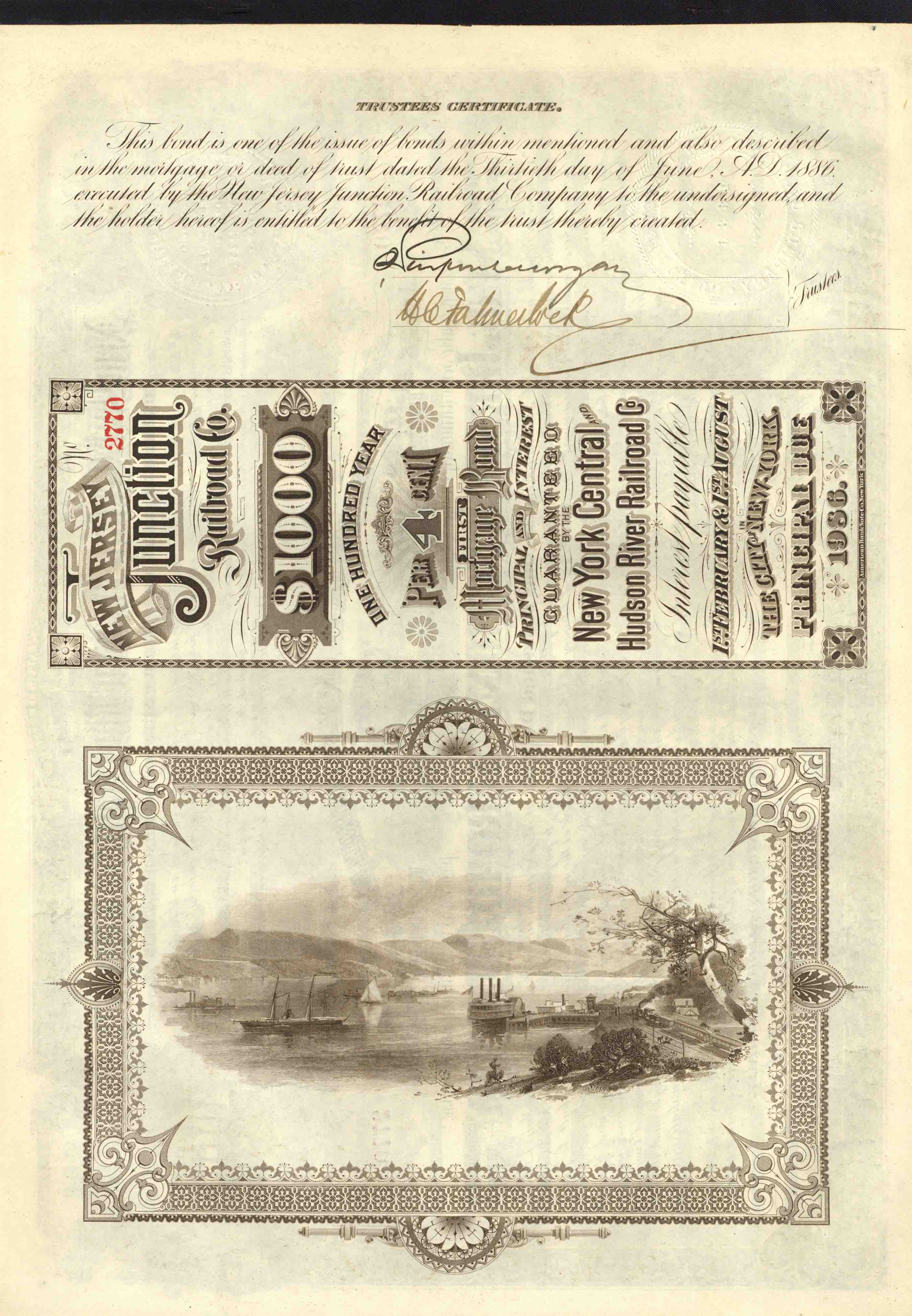 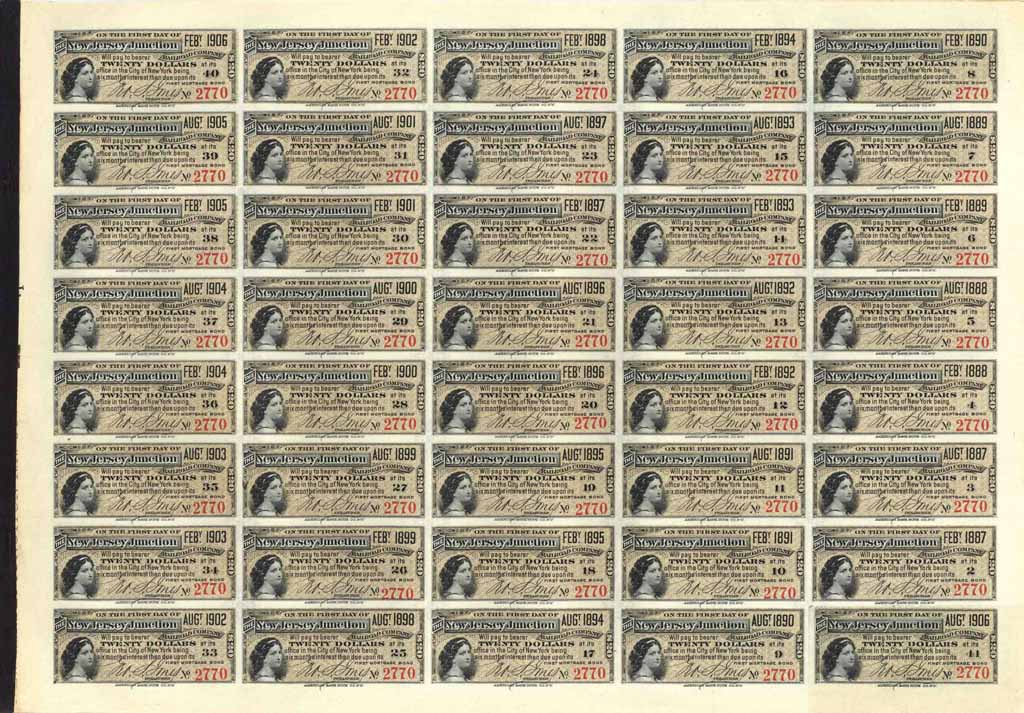 The New Jersey Junction Railroad (NJJ) was part of the New York Central Railroad and ran along the Hudson River in Hudson County, New Jersey, from the West Shore Railroad (NYCRR) yards at Weehawken Terminal south to Jersey City. It later owned an extension to the north, separated by the Weehawken yard from the original line. The company was incorporated under the laws of New Jersey on February 27, 1886. On July 1, 1886, it was leased for 100 years to the New York Central and Hudson River Railroad. The line opened for freight in May 1887 and passengers in June 1887. Read more at: https://en.wikipedia.org/wiki/New_Jersey_Junction_Railroad

Harris Charles Fahnestock (February 27, 1835  June 4, 1914) was an American investment banker. In 1861, he became a partner of Jay Cooke in the banking firm of Jay Cooke & Company, based in Washington, D.C. where he attracted attention "by negotiating for large war loans during the civil war." While in Washington, he began his interest in railroads, becoming treasurer of the Washington & Georgetown Line before moving to New York City in 1866 as a member of Jay Cooke, McCulloch & Co., alongside Cooke and Hugh McCulloch (the former Comptroller of the Currency under Lincoln). He was with the firm until its collapse during the Panic of 1873. Read more at: https://en.wikipedia.org/wiki/Harris_C._Fahnestock

John Pierpont Morgan (April 17, 1837  March 31, 1913) was an American financier and banker who dominated corporate finance on Wall Street throughout the Gilded Age. As the head of the banking firm that ultimately became known as J.P. Morgan and Co., he was a driving force behind the wave of industrial consolidation in the United States spanning the late 19th and early 20th centuries.

Over the course of his career on Wall Street, J.P. Morgan spearheaded the formation of several prominent multinational corporations including U.S. Steel, International Harvester and General Electric. He and his partners also held controlling interests in numerous other American businesses including AT&T, Western Union and 24 railroads. Due to his financial dominance, Morgan came to wield enormous influence over the nation's lawmakers and finances. During the Panic of 1907, he organized a coalition of financiers that saved the American economy from collapse.

As the Progressive Era's leading financier, J.P. Morgan's dedication to efficiency and modernization helped transform the shape of the American economy. Adrian Wooldridge characterized Morgan as America's "greatest banker". Morgan died in Rome, Italy, in his sleep in 1913 at the age of 75, leaving his fortune and business to his son, John Pierpont Morgan Jr. Biographer Ron Chernow estimated his fortune at $80 million (equivalent to $1.2 billion in 2019), a net worth which allegedly prompted John D. Rockefeller to say: "and to think, he wasn't even a rich man." Read more at: https://en.wikipedia.org/wiki/J._P._Morgan