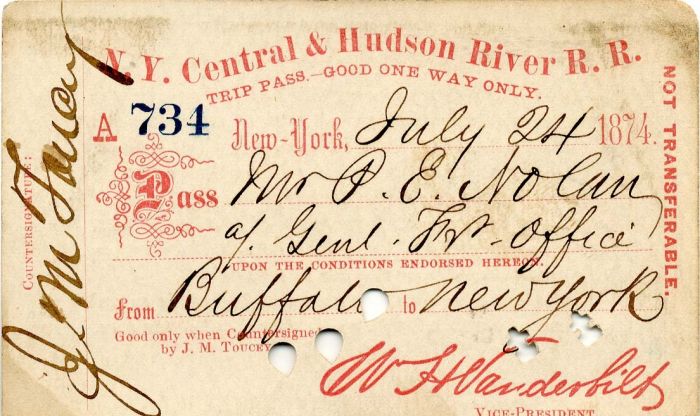 William Henry Vanderbilt (1821-1885) A businessman and a member of the prominent United States Vanderbilt family.

He inherited nearly $100 million from his father Cornelius Vanderbilt and had increased it to about $200 million at his death less than nine years later. At the time, he was the richest man America had ever seen, however his worth was pale in comparison to the likes of John D. Rockefeller and Andrew Carnegie.

His father carefully oversaw his business training, at age 18 starting him out as a clerk in a New York banking house. After joining the executive of the Staten Island railway, he was made its president in 1862 then three years later he was appointed vice-president of the Hudson River railway. In 1869, he was made vice-president of the New York Central and Hudson River Railroad Company, becoming its president in 1877. As well, he took over from his father as president of New York Central Railroad, the Lake Shore and Michigan Southern Railway, the Canada Southern Railway, and the Michigan Central Railroad.

He had worked with his father and following his death, actively expanded the family's railroad empire. In 1883, his elder sons assumed key positions. It was in his time that the Vanderbilt women demanded recognition from the older but less moneyed leaders of New York City society, centered on the Astor family, whom the Vanderbilts had by then far outstripped in wealth.

William Henry Vanderbilt was involved in a number of philanthropic causes including the YMCA, funding to help establish the Metropolitan Opera and an endowment for the College of Physicians and Surgeons at Columbia University. In 1880, he provided the money for Vanderbilt University to construct the Wesley Hall building for use as the Biblical Department and library and included 160 dormitory rooms for students and professors, lecture halls, as well as a cafeteria. The building was destroyed by fire in 1932 and his son Frederick made another donation to help cover the insurance shortfall and allow a new building to be erected.

An art enthusiast, William Henry Vanderbilt's collection included some of the most valuable works of the Old Masters and over his lifetime, Vanderbilt acquired more than 200 paintings.

In 1883, he resigned all his company presidencies and had his sons appointed as chairmen but left the day-to-day running of the businesses to experienced men appointed president.
William Henry Vanderbilt is perhaps most remembered for snapping "the public be damned" at an interviewer..in context, an irritated reaction to the other's suggestion that the New York Central Railroad system, which Vanderbilt controlled, ought to be operated as if it were a public trust.