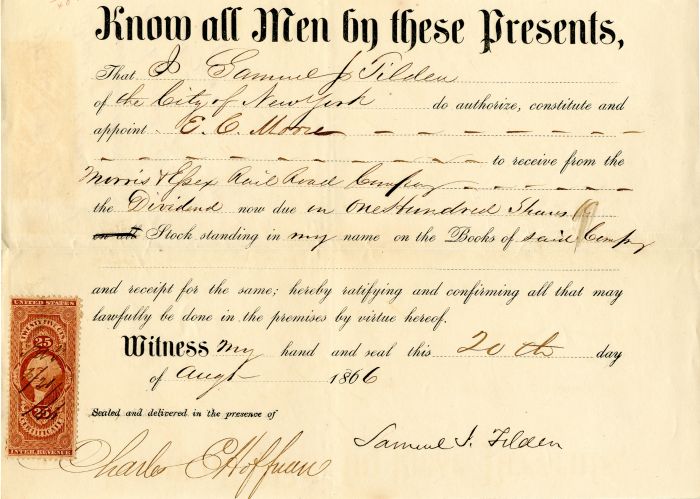 Samuel Jones Tilden (February 9, 1814  August 4, 1886) was the Democratic candidate for the U.S. presidency in the disputed election of 1876, one of the most controversial American elections of the 19th century. He was the 25th Governor of New York. A political reformer, he was a Bourbon Democrat who worked closely with the New York City business community, led the fight against the corruption of Tammany Hall, and fought to keep taxes low. Tilden was the first (and until the presidential election of 2000, only) candidate for the Presidency of the United States to not be elected despite receiving an absolute majority of the votes. Tilden was born in New Lebanon in New York State. He was descended from Nathaniel Tilden, an early English settler who came to America in 1634. He studied law at Yale, then transferred to New York University where he graduated in 1837. He was admitted to the bar in 1841, becoming a skilled corporate lawyer, with many railroad companies as clients in the shaky railroad boom decade of the 1850s. His legal practice, combined with shrewd investments, made him rich. In 1848, largely on account of his personal attachment to Martin Van Buren, he participated in the revolt of the Barnburners or Free-Soil faction of the New York Democrats. He was among the few such who did not join the Republican Party and, in 1855, was the candidate of the Soft faction for New York State Attorney General. Tilden became chairman of the Democratic State Committee after the Civil War. After having good relations to William M. Tweed and working closely together with him in the Democratic Party, Tilden came into conflict with the Tweed ring of New York City. Corrupt New York judges were the ring's tools, and Tilden, after entering the New York State Assembly in 1872 to promote the cause of reform, took a leading part in the judges' impeachment trials. By analyzing the bank accounts of certain members of the ring, he obtained legal proof of the principle on which the spoils had been divided. As a reform-spirited Governor in 1874, he turned his attention to a second set of plunderers, the Canal Ring, made up of members of both parties who had been systematically robbing New York State through the maladministration of its canals. Tilden succeeded in breaking them up. His successful service as governor gained him the presidential nomination. During the 1876 presidential election, Tilden won the popular vote over his Republican opponent, Rutherford B. Hayes, proving that the Democrats were once again competitive in the American political process following the Civil War. But the result in the Electoral College was in question because the states of Florida, Louisiana, and South Carolina each sent two sets of Electoral Votes to Congress. (There was separately a conflict over one elector from Oregon, who was disqualified on a technicality.) While the Republicans boldly claimed the election, Tilden mystified and disappointed his supporters by not fighting for the prize or giving any leadership to his advocates. Instead he devoted more than a month to the preparation of a complete history of the electoral counts over the previous century to show it was the unbroken usage of Congress, not of the President of the Senate, to count the electoral votes. Upon his defeat, Tilden said, "I can retire to public life with the consciousness that I shall receive from posterity the credit of having been elected to the highest position in the gift of the people, without any of the cares and responsibilities of the office." Tilden is the only candidate for President to garner an absolute majority of all votes cast for President in an election (that is, greater than 50 percent; Tilden garnered 51.5 percent) who was not ultimately elected President in that election.