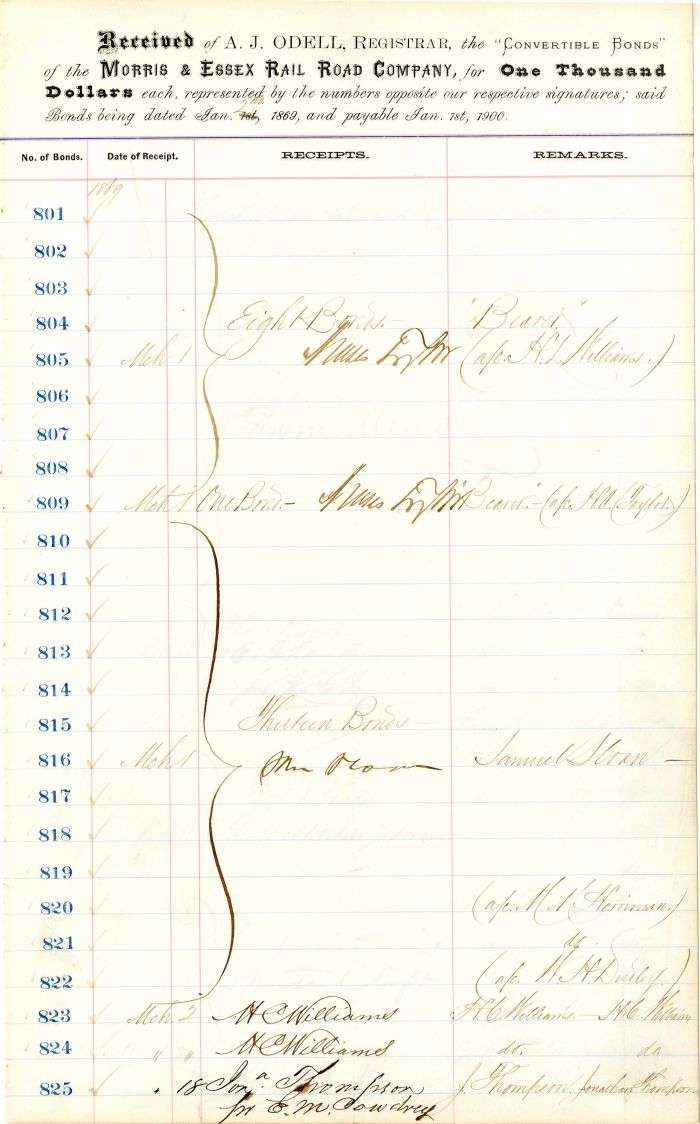 Samuel Sloan (1817-1907) Samuel Sloan was a well known 19th century railroad executive. He was a son of William and Elizabeth Sloan of Lisburn, County Down, Ireland. When he was a year old he was brought by his parents to N.Y. At age 14, the death of his father compelled Samuel to withdraw from the Columbia College Preparatory School, and he found employment at an importing house on Cedar Street in N.Y., where he remained connected for 25 years, becoming head of the firm. On April 8, 1844, he was married to Margaret Elmendorf, and took up his residence in Brooklyn. He was chosen a supervisor of Kings County in 1852, and served as president of the Long Island College Hospital. In 1857, having retired from the importing business, he was elected as a Democrat to the New York State Senate, of which he was a member for two years. Sloan at 40 was recognized in New York as a successful businessman who had weathered two major financial panics, but it could hardly have been predicted that 20 years of modest achievement as a commission merchant would be followed by more than forty years in constructive and profitable effort in a wholly different fieldthat of transportation. As early as 1855 he had been a director of the Hudson River railroad. Election to the presidency of the road quickly followed, and in the 9 years that he guided its destinies, the market value of the companys shares rose from $17 to $140. Resigning from the Hudson River, he was elected, in 1864, a director, and in 1867, president, of the Delaware, Lackawanna & Western Railroad, then and long after known as one of the small group of coal roads that divided the Pennsylvania anthracite territory. Beginning in the reconstruction and expansion era following the Civil War, Sloans administration of 32 years covered the period of shipping rebates, cut-throat competition, and hostile state legislation, culminating in federal regulation through the Interstate Commerce Commission. Sloans immediate job, as he saw it, was to make the Lackawanna more than a coal road, serving a limited region. Extensions north and west, and, finally, entrance into Buffalo, made it a factor in general freight handling. Readjustments had to be made. It was imperative, for example, that the old gauge of six feet be shifted to the standard 48 1/2". This feat was finally achieved on May 25, 1876, with a delay of traffic of only 24 hoursin some cases less. The total cost of the improvement was $1,250,000. Sloan was an ally of J. P. Morgan, and one of the founders of what is now Citibank and his name is engraved in stone on the wall in the former Citibank headquarters at 55 Wall Street. There is a statute of Sam Sloan one block from the former Lackawanna Railroad station in Hoboken, New Jersey. Sam Sloan had little patience with the likes of Jay Gould and Jim Fiske, and the other 19th-century robber barons. In his book, Reminiscences of a Stock Broker, Edwin Lefere, wrote: The newspapers never had to beat about the bush with old Sam Sloan. Although Sloan resigned the presidency in 1899, he continued for the remaining 8 years of his life as chairman of the board of directors. At his death, at the age of 90, he had been continuously employed in railroad administration for more than half a century and had actually been the president of 17 corporations. At the time of his death he was director or officer of 33 corporations including Citibank, Farmers Loan and Trust Co., United States Trust Co., Consolidated Gas Co., and Western Union Telegraph Company.