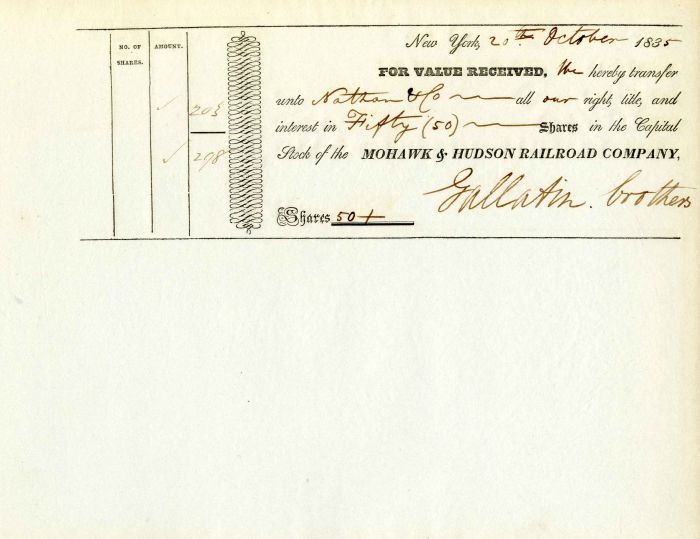 Years: 1835
Stock signed by Jas. Gallatin for Gallatin Bros. (December 18, 1796  May 29, 1876), son of Albert Gallatin, the man who helped broker the Treaty of Ghent, which ended the War of 1812 between Britain and the United States. James acted as his father's personal secretary during this diplomatic trip. His journal entries from this voyage were published in the September 1914 issue of Scribner's Magazine and include a detailed historical account of the negotiations and infighting between the American representatives as well as with the British delegates.

However, Raymond Walters, biographer of Albert Gallatin, and other historians believe the diary to be a forgery. Walters wrote "... I reached the conclusion that the diary is a complete fraud."

Walters notes that no manuscript for the diary has survived or was ever known to have been seen by anybody other than James Francis Gallatin. James Francis styled himself Count Gallatin, though his right to the title was disputed, but he was known to his own family as "bad Jimmy".

After the success at Ghent, the Gallatins traveled to France just as Napoleon arrived at Cannes after escaping Elba. James' diary includes a detailed look into the lives of the nobles as they faced the threat of Napoleon's return. At one point, he is asked by the famous artist Jacques-Louis David to sit as a cherub for his painting. James Gallatin succeeded his father as the president of the Gallatin National Bank in 1839. After his retirement in 1868 he resided in Paris, where he died.