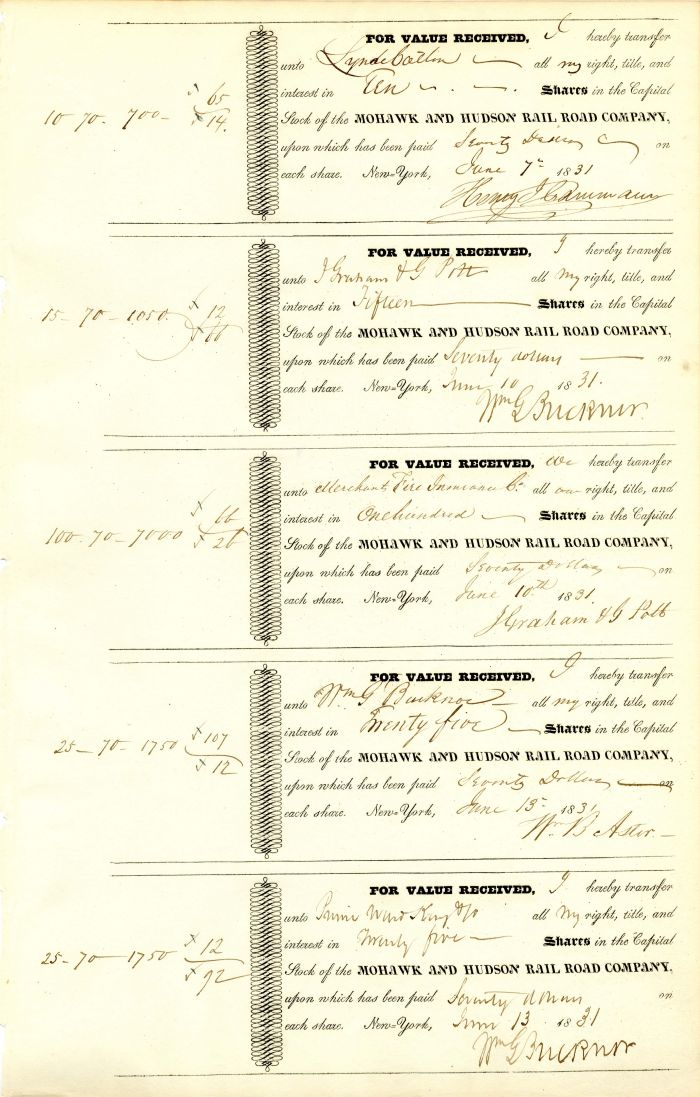 Uncut Sheet of 5 Stocks with one signed by Wm.B. Astor. Another is issued to Lynde Catlin. Early! Nice!

William Backhouse Astor, Sr. (1792-1875) William Backhouse Astor, Sr. was a businessman and member of the prominent Astor family. William Backhouse Astor, Sr. inherited the bulk of his father's estate and also that of his uncle Henry Astor who had died a wealthy man but without children. The combined inheritance made William Astor the richest man in the United States. He was the last member of the Astor family to enjoy this distinction. During the American Civil War he successfully brought a case against the income tax imposed by the United States government, which was ruled unconstitutional. His management of the family real estate holdings succeeded in multiplying their value, and he left an estate worth close to $50 million. It was at this time that the Astor fortune underwent its first major division, between William Backhouse Astor, Jr. (1830-1892) and John Jacob Astor III (1822-1890), whose son William Waldorf Astor relocated to Great Britain in 1893. His sons, whose side-by-side mansions were on the site later occupied by the first Waldorf=Astoria Hotel (a family property) and then the Empire State Building, inaugurated an era of both more flamboyant living and more generous philanthropy than their austere father and grandfather.

Major LYNDE CATLIN of Brooklyn, died on Tuesday, Oct. 8, at his summer home at Saranac Lake, aged 78 years. Major CATLIN served during the war of the rebellion, on the staffs of Gen. WOOD and Gen. GRANT, and after the war had a considerable experience in Indian fighting in the West. He was a direct descendant of Gov. PETER STUYVESANT .