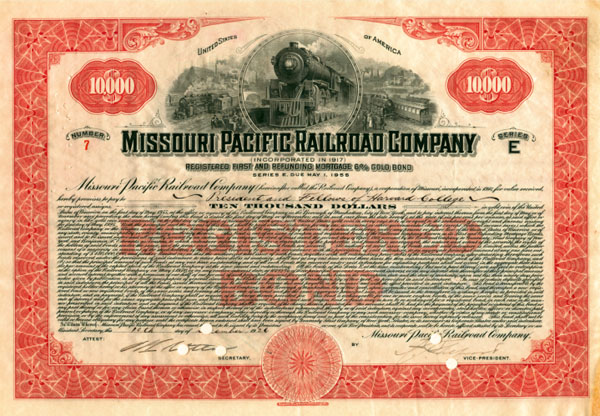 Missouri Pacific was under the control of New York financier Jay Gould from 1879 until his death in 1892. Gould developed a system extending through Colorado, Nebraska, Arkansas, Texas, and Louisiana. His son George Gould inherited control upon his father's death, but lost control of the company after it declared bankruptcy in 1915. The line was merged with the St. Louis, Iron Mountain and Southern Railway (SLIMS) and reorganized as the Missouri Pacific Railroad in 1917. Missouri Pacific later acquired or gained a controlling interest in other lines in Texas, including the Gulf Coast Lines, International-Great Northern Railroad, and the Texas and Pacific Railway.

MoPac declared bankruptcy again in 1933, during the Great Depression, and entered into trusteeship. The company was reorganized and the trusteeship ended in 1956.

By the 1980s the system would own 11,469 miles of rail line over 11 states bounded by Chicago to the east, Pueblo, Colorado, in the west, north to Omaha, south to the U.S.-Mexico border in Laredo, Texas, and southeast along the Gulf seaports of Louisiana and Texas. MoPac operated a fleet of more than 1,500 diesel locomotives, almost all purchased within the previous 10 years. Under the leadership of Downing B. Jenks, who became president and chief executive in 1961, the company became a pioneer in the early days of computer-guided rail technology. It was a major hauler of coal, grain, ore, autos, dry goods and shipping containers. At the time of its mega-merger in 1982, the MoPac owned more and newer locomotives and operated more track than partner Union Pacific Railroad.

By 1994 all motive power of the Missouri Pacific was repainted and on January 1, 1997, the Missouri Pacific was officially merged into the Union Pacific Railroad by the Union Pacific Corporation. UP continued to use the MoPac headquarters building at 210 N. 13th St. in downtown St. Louis for its customer service center until February 15, 2005. The former MoPac building has undergone rehab as apartments and is now known as Park Pacific.

In the early years of the 20th century, most Missouri Pacific and St. Louis, Iron Mountain and Southern passenger trains were designated by number only, with little emphasis on premier name trains. This changed in May, 1915, with the inauguration of the Scenic Limited between St. Louis, Kansas City, and San Francisco. Between Pueblo, Colorado and Salt Lake City, the Scenic Limited operated through the Royal Gorge over the tracks of the Denver and Rio Grande Railroad. From Salt Lake City to San Francisco, the Scenic Limited operated over the Western Pacific Railroad. A second premier train, the Sunshine Special began operating on December 5, 1915, between St. Louis and San Antonio via Little Rock and Austin. Another named train, the Rainbow Special, was placed in service in July 1921 between Kansas City and Little Rock. The Sunshine Special soon eclipsed the other trains in travel volume, becoming the signature train of the Missouri Pacific Railroad. An advertising slogan in 1933 proclaimed: "It's 70-degrees in the Sunshine when it's 100-degrees in the shade," referring to the fact that the Sunshine Special was one of the first air-conditioned trains in the southwest. When new streamlined trains were delivered, the Scenic Limited and Rainbow Special names faded, but the Sunshine Special had sufficient name recognition to co-exist along with the new streamliners into the late 1950s.

In the streamliner era, the Missouri Pacific's premier passenger trains were collectively known as the Eagles. A variety of Eagle trains were operated, with the first such train inaugurated in 1940. These routes included the Missouri River Eagle (St. Louis-Kansas City-Omaha), the Delta Eagle (Memphis, Tennessee-Tallulah, Louisiana), the Colorado Eagle (St. Louis-Pueblo-Denver), the Texas Eagle (St. Louis to Texas), and the Valley Eagle (Houston-Corpus Christi-Brownsville, Texas).

Missouri Pacific gained a reputation for aggressively discontinuing passenger trains after the mid-1960s. When the National Railroad Passenger Corporation (Amtrak) assumed passenger train operations on May 1, 1971, the only Missouri Pacific route included as part of Amtrak's basic system was its main line from St. Louis to Kansas City. This route is now served by Amtrak's Missouri River Runner (named for the fact that it runs mostly parallel to the Missouri River). On March 13, 1974, Amtrak restored passenger train service over segments of Missouri Pacific-Texas and Pacific's original Texas Eagle route between St. Louis, Little Rock, Dallas, Austin, San Antonio, and Laredo with the Inter-American. This train was renamed the Texas Eagle in 1981, resurrecting the name of the famous MoPac train. The Amtrak version runs over former MoPac and T&P trackage for much of its route.

In the early days of steam, the MP generally used gold lettering on its steam locomotives. This was further broken down by using two different lettering styles: block for the numbers and roman for the lettering (including subsidiary markings and classifications). Once Lewis W. Baldwin became president of the Missouri Pacific in April 1923, the color of the lettering changed to aluminum.

The Missouri Pacific was known for its "Eagle" color scheme designed by Raymond Loewy. It consisted of dark cerulean, icterine yellow, and isabelline gray. These colors were mostly applied to passenger locomotives, passenger cars, merchandise boxcars and first-generation freight locomotives starting on October 22, 1939, and ending on April 27, 1961.

When the Texas & Pacific was acquired by the Missouri Pacific, the railroad discontinued its swamp holly orange and black for the Eagle colors (except icterine yellow) in its new order of GP18s 11451149 in May 1960; this follows the traditional practice of railroads using the parent company's colors.

Downing B. Jenks became president of the Missouri Pacific in 1961. To save money, Jenks introduced a new paint scheme for the railroad's locomotives. Starting April 28, 1961, all locomotives were to be painted in dark eagle blue with white accent marks but without the use of isabelline grey or icterine yellow. The name Jenks blue (also known as dark eagle blue) comes from Jenks' decision to change the livery of Missouri Pacific locomotives. EMD GP18 #400 made its debut in January 1962 with the simplified Jenks blue scheme. Starting in September 1974, when EMD GP38-2 #2111 was introduced, decals with the company's logo applied to locomotives used more reflective white surfaces for safety and visibility.

With the Union Pacific merger taking effect on December 22, 1982, the Missouri Pacific sought to keep its simple Jenks blue scheme. However, a study in late 1983 indicated the expense of all three railroads' paint schemes was too costly. Union Pacific then allowed the Missouri Pacific and Western Pacific railroads to create a new scheme that would represent all three railroads. Following the Missouri Pacific practice, the first paint scheme design consisted of an armor yellow carbody and a red frame sill with a black underframe, trucks and fuel tank. For added simplicity, this locomotive was to have the railroad's initials, logos and numbers applied. However, the scheme was discarded; instead a standard Union Pacific scheme with 20" lettering and 7/8" black edging, along with a 24" UP shield on the nose and a 10 1/2" UP shield on the air equipment doors, was used. Among the new features of this scheme were harbor mist gray trucks and anti-glare panels.

On July 30, 2005, UP unveiled a brand new EMD SD70ACe locomotive, Union Pacific 1982, with Missouri Pacific paint and logos, as part of a new heritage program.