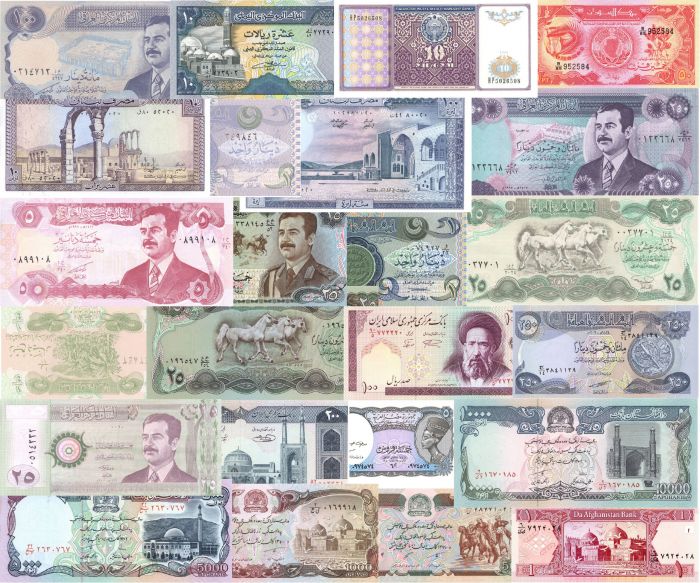 Includes notes from Afghanistan (5), Egypt (1), Iran (2), Iraq (11), Lebanon (2), Sudan (1), Uzbekistan (1), and the Yemen Arab Republic (1). Please note that the lions share of the collection are from Iraq and Sudan, both countries that are quite Scarce. Collection of 24 Different Notes in Choice Crisp Uncirculated Condition. All are Illustrated!

The Middle East is a region spanning the vast majority of Western Asia and all of Egypt (mostly in North Africa). The term has come into wider usage as a replacement of the term Near East (as opposed to the Far East) beginning in the early 20th century. The broader concept of the "Greater Middle East" (aka the Middle East and North Africa or the MENAP) also includes the Maghreb, Sudan, Djibouti, Somalia, the Comoros, Afghanistan, Pakistan, and sometimes Transcaucasia and Central Asia into the region. The term "Middle East" has led to some confusion over its changing definitions.

Most Middle Eastern countries (13 out of 18) are part of the Arab world. The most populous countries in the region are Egypt, Iran, and Turkey, while Saudi Arabia is the largest Middle Eastern country by area. The history of the Middle East dates back to ancient times, with the geopolitical importance of the region being recognized for millennia. Several major religions have their origins in the Middle East, including Judaism, Christianity, and Islam. Arabs constitute the majority ethnic group in the region, followed by Turks, Persians, Kurds, Azeris, Copts, Jews, Assyrians, Iraqi Turkmen, and Greek Cypriots.

The Middle East generally has a hot, arid climate, with several major rivers providing irrigation to support agriculture in limited areas such as the Nile Delta in Egypt, the Tigris and Euphrates watersheds of Mesopotamia (Iraq, Kuwait, and eastern Syria), and most of what is known as the Fertile Crescent. Most of the countries that border the Persian Gulf have vast reserves of crude oil, with monarchs of the Arabian Peninsula in particular benefiting economically from petroleum exports. Because of the arid climate and heavy reliance on the fossil fuel industry, the Middle East is both a heavy contributor to climate change and a region expected to be severely negatively impacted by it.