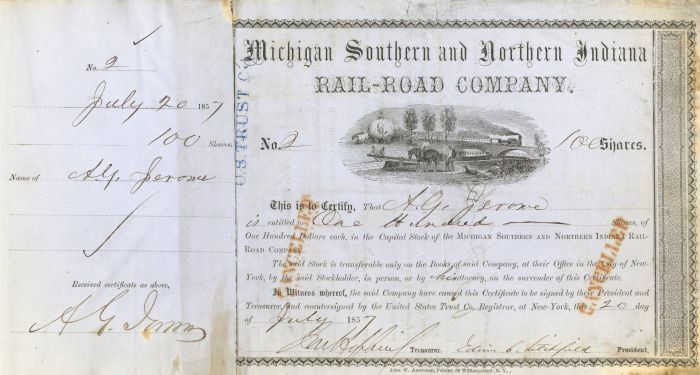 Addison G. Jerome, Securities Broker. By 1863, he had amassed a fortune in the stock market and had established his own banking house which enjoyed great success due to his enviable and very well-deserved reputation on Wall Street. Later his luck changed and he died virtually penniless.

Henry Keep formed a partnership with LeGrand Lockwood, co-founder of Lockwood & Company. The firm was one of Wall Street's leading brokerage houses, Lockwood was a longtime ally of Cornelius Vanderbilt. Together, the two men manipulated the stock of the Michigan Southern and Northern Indiana Railroad in the 1850s, buying large quantities whenever they forced the price down. They won control of the company in 1859. On April 25, 1860, Keep was elected to its board of directors. He served as its treasurer from 1861 to 1863. Keep solidified his hold on the company in 1863 by breaking Addison G. Jerome, who controlled a majority of the company's stock. Keep noticed that the board of directors was authorized to issue up to 14,000 shares in new stock. Keep called a secret meeting of the board, which excluded Jerome, and the board authorized the issue. Keep began selling small numbers of these shares, and Jerome began buying them up in an attempt to force Keep off the board of directors. To finance his purchases, Jerome engaged in short sales of stock. Keep then dumped the majority of the 14,000 shares on the market, causing the price to drop significantly. Jerome lost $3 million covering his short sales, and was financially broken. (He died a year later.)