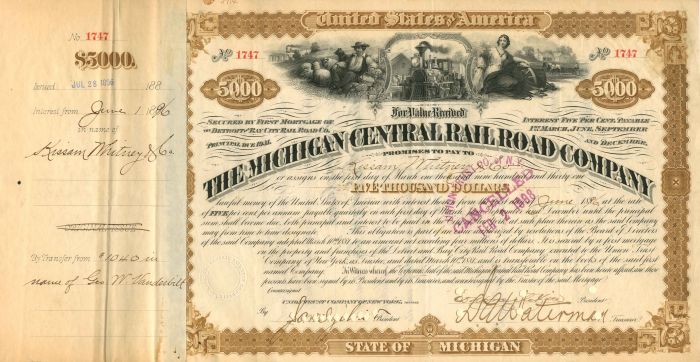 $5,000 5% Bond printed by American Bank Note Co., New York. Transferred from Geo. W. Vanderbilt. George Washington Vanderbilt II (November 14, 1862  March 6, 1914) was an art collector and member of the prominent Vanderbilt family, which amassed a huge fortune through steamboats, railroads, and various business enterprises. He built a 250-room mansion, the largest privately owned home in the United States, which he named Biltmore Estate. George W. Vanderbilt was the youngest child of William Henry Vanderbilt and Maria Louisa Kissam. Though there is no evidence to suggest that he referred to himself using a numerical suffix during his life, various sources have called him both George Washington Vanderbilt II and III throughout time. Today, Biltmore recognizes him as George W. Vanderbilt III, as he had two uncles by that name, the first of whom died at the age of four.