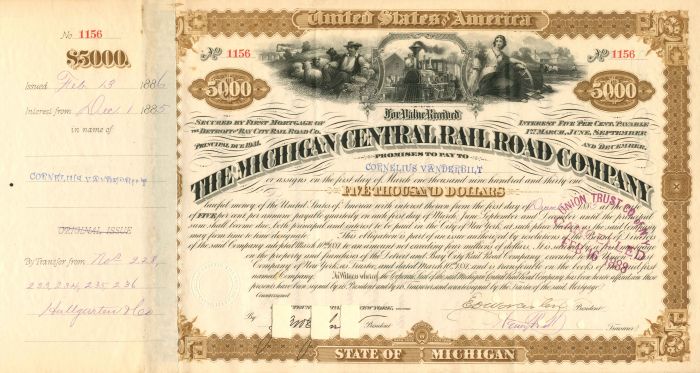 $5,000 5% Bond printed by American Bank Note Co., New York. Issued to Cornelius Vanderbilt. (1843-1899) Noted Financier and Head of the House of Vanderbilt in the third generation. He was the favorite grandson of Cornelius Vanderbilt, who left him $5 million, and the eldest son of William Henry Vanderbilt, who left him close to $70 million. In his turn he succeeded them as head of the New York Central and related railroad lines in 1885. He had a reputation as something of a workaholic, though a stroke in 1896 compelled him to reduce his active business involvement. Though retired from active control he took an advisory role in the many properties in which he, and the family, had made investments. Regarded as a capable and conservative railroad manager, and a splendid accountant; mastering the intricacies of the banking system during his association with the Shoe and Leather Bank of New York.