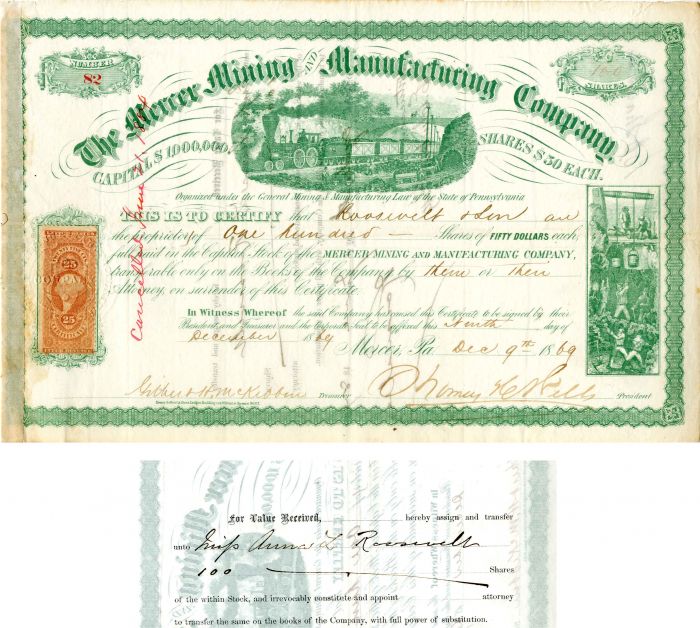 Stock issued to Roosevelt & Son and transferred to Anna L. Roosevelt, sister of Teddy and niece of Rob't B. who was president of this company. Robert Barnhill Roosevelt, also known as Robert Barnwell Roosevelt (August 7, 1829  June 14, 1906), was a sportsman, author, and politician who served as a United States Representative from New York (18711873) and as Minister to the Hague (18881889). He was also a member of the Roosevelt family and an uncle of US President Theodore Roosevelt. Robert Roosevelt was born in New York City to businessman Cornelius Van Schaack "C.V.S." Roosevelt and Margaret Barnhill. He had three elder brothers, Silas, James, and Cornelius Jr., and two younger brothers, Theodore and William. He was an uncle of President Theodore "T.R." Roosevelt, Jr. and grand-uncle of First Lady Anna Eleanor Roosevelt. As an Oyster Bay Roosevelt, and through his ancestor Cornelius Van Schaack, Jr., he was a descendant of the Dutch American Schuyler family. Roosevelt studied law and was admitted to the New York State Bar in 1850. He commenced practice in New York City. During the Civil War he was an active Democrat, and a founder of the Allotment Commission and the Loyal National League. His first experience in politics was in the organization of the Citizens' Association at the time of the Tweed Ring administration in New York city. For several years, he edited the organ of the Citizens' Association, the New York Citizen, at first with Charles G. Halpine, and after Halpine's death by himself. He was a founder of the Committee of Seventy, and first vice-president of the Reform Club. Roosevelt was elected as a Democrat to the 42nd Congress (March 4, 1871  March 3, 1873). Although the pressure of anti-Tammany Democratic organizations forced Tammany Hall to approve his nomination, he denounced its measures, and did much to contribute to the breaking up of the latter organization. Roosevelt served as trustee representing the city of New York for the New York and Brooklyn Bridge from 1879 to 1882. He was instrumental in establishing paid fire and health departments in New York City. He was a member of the Board of Aldermen of New York City. He was appointed by President Grover Cleveland as Minister to The Hague, serving from August 10, 1888 to May 17, 1889. He was treasurer of the Democratic National Committee in 1892. Roosevelt was an early angler and conservationist. He organized several clubs to restrain the indiscriminate slaughter of game. He is credited with influencing his nephew, Theodore Roosevelt, to become a conservationist. He founded the New York State Fishery Commission in 1867, and was appointed one of the three fish commissioners. He served as fish commissioner for 20 years, 18681888, without a salary. The reports of the commission were prepared chiefly by him, and led to the appointment of similar commissions in other states. For many years, he served as president of the Fish Culture Association, of an association for the protection of game, of the New York Sportsman's Club, and of the International Association for the Protection of Game. He was a member of the American Association for the Advancement of Science.[6] As a member of the U.S. Congress, he originated the bill to create the United States Fish Commission. Roosevelt was a popular author and a friend of writers such as Oscar Wilde. He sometimes wrote under the pseudonym Barnwell or Ira Zell. He edited Political Works of Charles G. Halpine, supplying a memoir (1869). Robert's nephew Theodore Jr. credited him with being the first to scribe the "Br'er Rabbit" stories (which had been passed down orally by slaves), "publishing them in Harper's, where they fell flat. This was a good many years before a genius arose who, in 'Uncle Remus,' made the stories immortal.

Item ordered may not be exact piece shown. All original and authentic.
Email this to a friend
Request Info
Previous Item (Mercer Mining and Manufacturing Company signed by Robert B. Roosevelt - Stock Certificate)    (Mergenthaler Linotype Co. Issued to D.O. Mills and Signed by Ogden Mills- Stock Certificate) Next Item