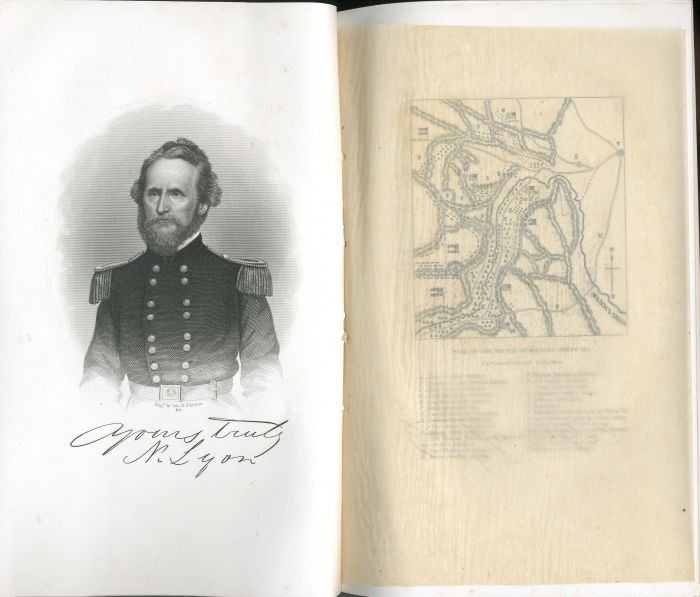 Nathaniel Lyon (July 14, 1818  August 10, 1861) was the first Union general to be killed in the American Civil War. He is noted for his actions in Missouri in 1861, at the beginning of the conflict, to forestall secret secessionist plans of the governor Claiborne Jackson.

He had fought in the Second Seminole War in Florida and the MexicanAmerican War. After being assigned to Kansas, where many residents were divided about slavery and the Union, he developed strong pro-Union views. In February 1861, Lyon was made commander of the Union arsenal in St. Louis, Missouri (another divided state). Suspicious of governor Claiborne, who was working with Jefferson Davis on a secret plan for secession, Lyon forced the surrender of the pro-Confederate militia.

Some civilians rioted and Lyons troops fired into the crowd, which came to be known as the Camp Jackson Affair. Lyon was promoted brigadier-general and given command of Union troops in Missouri. He was killed at the Battle of Wilsons Creek, while trying to rally his outnumbered soldiers. But Lyons efforts had prevented the State of Missouri from joining the Confederacy.

Lyon was born in 1818 on a farm in Ashford, Connecticut, now in the Town of Eastford, the son of Amasa and Kezia (Knowlton) Lyon. He had a brother, William H. Lyon. As a boy he hated farming.

His relatives had fought in the American Revolutionary War, and Lyon was determined to follow in their footsteps. In 1837 he applied to the United States Military Academy, was admitted, and in 1841 graduated eleventh in his class of 52 cadets.

Upon graduating from West Point, Lyon was commissioned as a 2nd lieutenant and assigned to the 2nd U.S. Infantry Regiment after graduation and served with them in the Seminole Wars and the MexicanAmerican War. Despite denouncing American involvement in the Mexican War, he was promoted to first lieutenant for "conspicuous bravery in capturing enemy artillery" at the Battle for Mexico City and received a brevet promotion to captain for the battles of Contreras and Churubusco. Although he was eligible for membership, Lyon did not join the Aztec Club of 1847 when it was formed in Mexico City in 1847.

After the Mexican War, Lyon was then posted to the frontier, where he participated in the massacre of Pomo Native Americans at Clear Lake, California, the 1850 "Bloody Island Massacre"; as many as 100 old men, women and children were killed.

After being reassigned to Fort Riley, Kansas, Lyon became staunchly antislavery. He did not support the radicalism of the abolitionists, and came to support the Republican Party while serving in the border wars known as "Bleeding Kansas." In January 1861, he wrote about the secession crisis, "It is no longer useful to appeal to reason, but to the sword."

Condition: Excellent
Item ordered may not be exact piece shown. All original and authentic.
Email this to a friend
Request Info
Previous Item (Letter signed by A.W. Mellon)    (Sketch signed by Paul Jones) Next Item