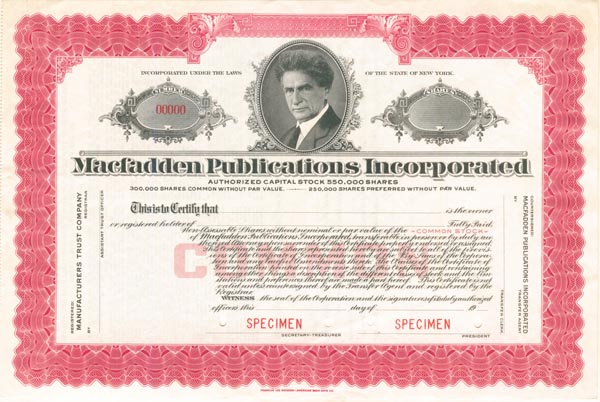 Macfadden Communications Group is a publisher of business magazines. It has a historical link with a company started in 1898 by Bernarr Macfadden that was one of the largest magazine publishers of the twentieth century.

Physical Culture, Bernarr Macfadden's first magazine, was based on Macfadden's interest in bodybuilding. The launch of True Story in 1919 made the company very successful. Other well-known magazines, such as Photoplay and True Detective, soon followed. Macfadden also launched the tabloid New York Evening Graphic. Bernarr Macfadden withdrew from his leadership roles with the company in 1941.

Downe purchased the newspaper supplement Family Weekly in 1966, and the Ladies' Home Journal and The American Home from the Curtis Publishing Company in 1968.

Us was purchased in 1980, and sold in 1986. In the mid-eighties, Macfadden bought the Ideal Publishing Company, which published Teen Beat and other fan magazines, from Filmways. MacFadden acquired a stake in what would become American Media in 1989 when it bought a stake in the National Enquirer.

In 1991, the Macfadden consumer magazines were spun off and merged with Sterling's Magazines. Sterling's published fan magazines such as Tiger Beat, as well as the music magazine Metal Edge. The merger was finalized in October 1992. In 1998, the conglomerate's line of youth music publications was sold off to Primedia; the rest were bought by Dorchester Media in 2004.

The trade magazines Chief Executive and Discount Merchandiser, as well as the company's stake in American Media, remained a separate company. American Media was sold in 1999 to the investment group Evercore Partners. The Macfadden trade titles were sold to VNU the same year.

The executives of Macfadden Business Communications started a new company using the Macfadden name. It is a publisher of business-to-business magazines.

Macfadden also published a few hardcover books through the years, under the imprint Bartholomew House. Initially a way to group together stories from Macfadden's magazines into a book (as in Great Western Heroes, Great Pioneer Heroes), the imprint expanded into first editions of new material after the purchase by the Bartell Group (Coffee, Tea or Me?, "Say ... Didnt You Used to Be George Murphy?").