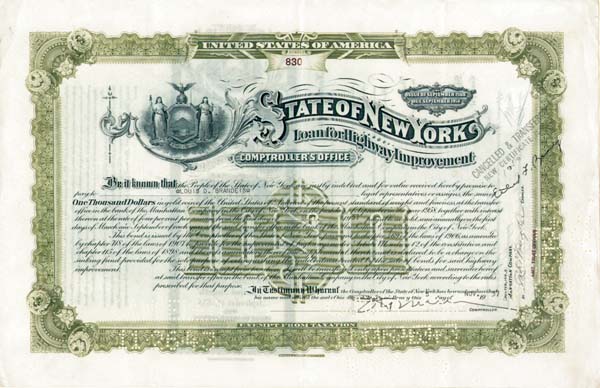 Louis D. Brandeis (1856-1941) Supreme Court Justice. Graduated from Harvard and as a young attorney became known as the People's attorney. He always felt a deep responsibility to aid in making the law responsive to the needs of a rapidly changing society. While on the bench of the Supreme Court, he scrupulously avoided all extrajudicial activities and involvements except for his support of the Zionist cause, to which he had been devoted since 1912. Brandeis University, founded in 1947, was named for him. This 1930's $1,000 Bond of the State of New York Loan for Highway Improvement is issued to Brandeis and is signed by the Trustees of his Estate including 3 Brandeis relatives including Alice G. Brandeis on a separate transfer document dated 1941. Excellent Condition. Rare!

Item ordered may not be exact piece shown. All original and authentic.
Email this to a friend
Request Info
Previous Item (Loan for Canal Improvement State of New York Issued to the will of Alfred G. Vanderbilt - $10,000 - Bond)    (Louis D. Brandeis Issued To and Signed Baltimore and Ohio Railroad Company $5000 Bond) Next Item