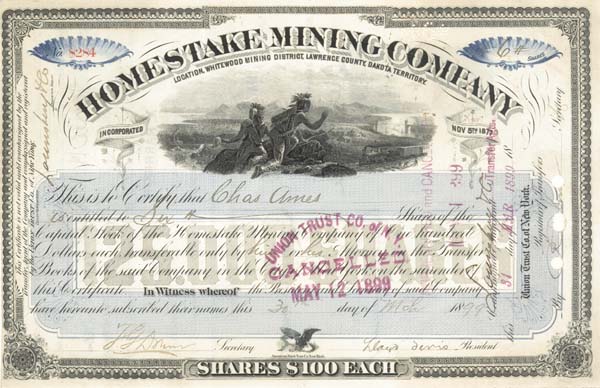 Lloyd Tevis, (1824-1899), Capitalist. In 1849, he joined the gold rush to California and tried his luck for nine months in the diggings. Having little success, he moved on to Sacramento where he formed a partnership with James Ben Ali Haggin. Their law partnership grew more and more into one of business and finance rather than law. He promoted the Southern Pacific and was President in 1869-70. He was owner of many gold and silver mines including partners with George Hearst in Homestake Mine and chief owner of the Anaconda Copper Properties in Montana. Later, the Tevis share was sold to a syndicate headed by John D. Rockefeller for $8 Million for his share! This Homestake Mining Co. 1890's stock has a nice uncancelled signature of Tevis as President. Rare and in Excellent Condition. Rare!

Item ordered may not be exact piece shown. All original and authentic.
Email this to a friend
Request Info
Previous Item (Livingston Signed Harnden's Express)    (Loan for Canal Improvement State of New York Issued to the will of Alfred G. Vanderbilt - $10,000 - Bond) Next Item