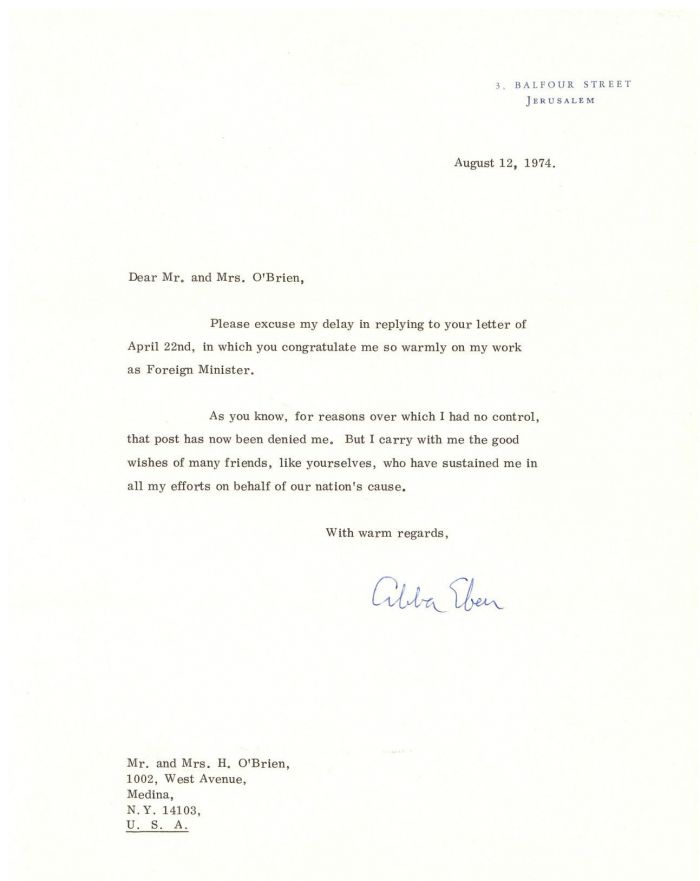 Typed letter signed by Abba Even in Jerusalem to Mr. and Mrs. H. O'Brien in New York. Envelope also included. 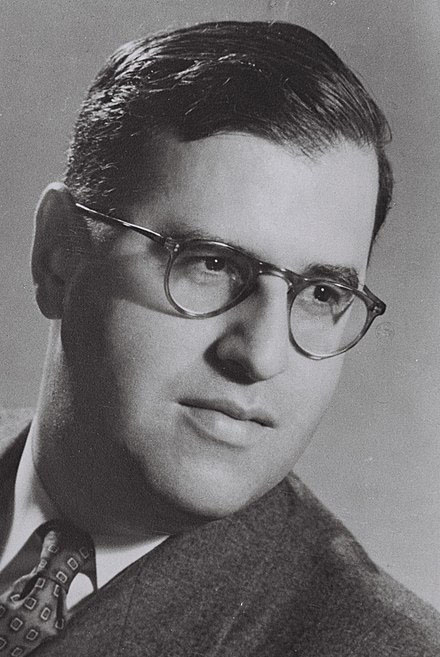 Born in Cape Town, South Africa, on 2 February 1915 to Lithuanian Jewish parents, Eban moved to the United Kingdom at an early age. As a child, he recalled being sent to his grandfather's house every weekend to study the Hebrew language, Talmud, and Biblical literature. He lived for a period of time in Belfast.

He attended St Olave's Grammar School, then Southwark and read Classics and Oriental languages at Queens' College, Cambridge, where he achieved a double first. During his time at University and afterwards, Eban was highly involved in the Federation of Zionist Youth and was editor of its ideological journal, The Young Zionist.

After graduating, he researched Arabic and Hebrew as a Fellow of Pembroke College from 1938 to 1939. At the outbreak of World War II, he worked for Chaim Weizmann at the World Zionist Organization in London from December 1939.

He served in the British Army in Egypt and Mandate Palestine, becoming an intelligence officer in Jerusalem, where he coordinated and trained volunteers for resistance in the event of a German invasion, serving as a liaison officer for the Allies to the Jewish Yishuv.

After the war he continued in his post, helping to set up and run the British Foreign Office's Middle East Centre for Arab Studies which was originally based in Jerusalem before relocating to Shemlan near Beirut. He was at that time known as "Aubrey Evans".

In 1947, he translated from the original Arabic Maze of Justice: Diary of a Country Prosecutor, a 1937 novel by Tawfiq al-Hakim.

Eban moved back to London briefly to work in the Jewish Agency's Information Department, from which he was posted to New York, where the United NationsGeneral Assembly was considering the "Palestine Question". In 1947, he was appointed as a liaison officer to the United Nations Special Committee on Palestine, where he was successful in attaining approval for the recommendation of partition of Palestine into Jewish and Arab segmentsResolution 181. At this stage, he changed his name to the Hebrew word Abba, meaning "Father".

Eban continued at the United Nations over the next decade. From 1950 to 1959 he also served as his country's ambassador to the United States. He was renowned for his oratorical skills. As Henry Kissinger stated:

I have never encountered anyone who matched his command of the English language. Sentences poured forth in mellifluous constructions complicated enough to test the listeners intelligence and simultaneously leave him transfixed by the speaker's virtuosity.

His knowledge of history and fluency in ten languages enhanced his speech-making in the United Nations, even to skeptical or hostile audiences. In 1952, Eban was elected Vice President of the UN General Assembly. A collection of Eban's speeches before the United Nations' Security Council and General Assembly both at universities and other venues between 1948 and 1968 was compiled in Voice of Israel, recently reissued in eBook form by Plunkett Lake Press.

He was known for his witty remarks. For example, when he was complimented on his perfect Oxford English he replied "Cambridge actually, but in politics one expects to be smeared."

Eban left the United States in 1959 and returned to Israel, where he was elected to the Knesset (the Israeli parliament) as a member of Mapai. He served under David Ben-Gurion as Minister of Education and Culture from 1960 to 1963, then as deputy to Prime Minister Levi Eshkol until 1966. Through this period (195966), he also served as president of the Weizmann Institute in Rehovot.

From 1966 to 1974, Eban served as Israel's foreign minister. He defended the country's reputation after the Six-Day War by asserting, in a speech to the United Nations General Assembly, that Israel acted in response to an imminent threat: "So on the fateful morning of 5 June, when Egyptian forces moved by air and land against Israel's western coast and southern territory, our country's choice was plain". Nonetheless, he was a strong supporter of trading parts of the territories occupied in the war in exchange for peace. He played an important part in the shaping of UN Security Council Resolution 242 in 1967, as well as Resolution 338 in 1973. Among his other high level contacts, Eban was received by Pope Paul VI in 1969.

Eban was at times criticized for not voicing his opinions in Israel's internal debate. However, he was generally known to be on the "dovish" side of Israeli politics and was increasingly outspoken after leaving the cabinet. In 1977 and 1981, it was widely understood that Shimon Peres intended to name Eban Foreign Minister, had the Labor Party won those elections. Eban was offered the chance to serve as minister without portfolio in the 1984 national unity government, but chose to serve instead as Chair of the Knesset's Foreign Affairs and Defense Committee from 1984 to 1988.

In 1988, after three decades in the Knesset, he lost his seat over internal splits in the Labour Party. He devoted the rest of his life to writing and teaching, including serving as a visiting academic at Princeton University, Columbia University and George Washington University. He also narrated television documentaries including Heritage: Civilization and the Jews (PBS, 1984), for which he was host, Israel, A Nation Is Born (1992), and On the Brink of Peace (PBS, 1997).

Eban died in 2002 and was buried in Kfar Shmaryahu, north of Tel Aviv. He was survived by his wife, Shoshana "Suzy" (née Ambache) (sister of Aura Herzog), who died in 2011, and their two children.