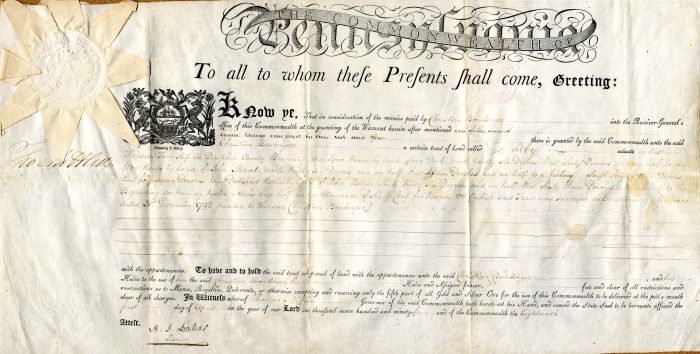 Thomas Mifflin (January 10, 1744  January 20, 1800) was an American merchant, soldier, and politician from Philadelphia, Pennsylvania. He served in a variety of roles during and after the American Revolution, several of which qualify him to be counted among the Founding Fathers. He was the first Governor of Pennsylvania, serving from 1790 to 1799. Born in Philadelphia, Mifflin became a merchant after graduating from the College of Philadelphia. He joined the Continental Army after serving in the Pennsylvania Provincial Assembly and the Continental Congress. During the American Revolutionary War, he was an aide to General George Washington and the Continental Army's Quartermaster General, rising to the rank of major general. Mifflin returned to Congress in 1782 and was elected President of the Continental Congress in 1783. He served as Speaker of the Pennsylvania House of Representatives from 1785 to 1787, then as President of the Pennsylvania Supreme Executive Council from 1788 to 1790. Mifflin was a delegate to the 1787 Philadelphia Convention and signed the United States Constitution. He then presided over the committee that wrote Pennsylvania's own constitution and he became the first governor after the ratification of the constitution. Mifflin left office as governor in 1799, and died the following year.

Condition: Excellent
Item ordered may not be exact piece shown. All original and authentic.
OUT OF STOCK
Request re-stock notice?
Email this to a friend
Request Info
Previous Item (Lampazos Silver Mines Company signed at back by G.G. Rice)    (Lehigh & Hudson River Railway Company Issued to and Signed by Garrett A. Hobart - Stock Certificate) Next Item