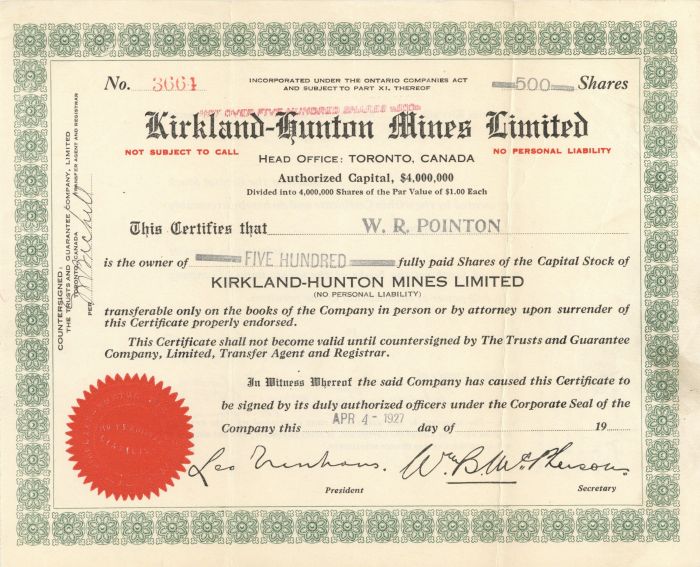 Kirkland Lake is a town and municipality in Timiskaming District in Northeastern Ontario, Canada. The 2016 population, according to Statistics Canada, was 7,981.

The community name was based on a nearby lake which in turn was named after Winnifred Kirkland, a secretary of the Ontario Department of Mines in Toronto. The lake was named by surveyor Louis Rorke in 1907. Miss Kirkland never visited the town, and the lake that bore her name no longer exists because of mine tailings. The community comprises Kirkland Lake (Teck Township), as well as Swastika, Chaput Hughes, Bernhardt, and Morrisette Twp.

Kirkland Lake was built on gold, but it is equally well known for producing world-famous hockey players. Indeed, legendary hockey broadcaster Foster Hewitt called Kirkland Lake "the town that made the NHL." The town celebrated this via Hockey Heritage North which has been renamed in the meantime to Heritage North.

Gold in the Kirkland Lake region was originally reported in the late 1800s by Chief Ignace Tonené of the Temagami First Nation. In fact, he staked a claim near the north arm of Larder Lake but stated it was jumped (stolen). He reported this, but no action was taken. Chief Tonene Lake was named in his honour. Chief Ignace Tonené would go on to help form Beaverhouse First Nation.

Later, Tom Price discovered a boulder containing gold on a visit to the Kirkland Lake area in 1906.

It was at Teck-Hughes mine where miners and engineers developed Teck-Cable for sturdy electrical transmission. That type of cable is now used on electrical projects around the world. You can learn more about this teck-cable invention on YouTube.

By 1914, there was one mine in operation, the Tough-Oakes, which included electric power transmitted from Charlton. A settlement had formed at the southwest arm of the lake, which included a post office, stores and a hotel.

Early in the Second World War gold production in the area decreased due to personnel being lost to more essential war industries. In 1942, gold mining was declared a non-essential industry to the war effort which resulted in gold mines across the country being at a lower priority for personnel and supplies relative to producers of base metals. After the war, local soldiers returned to the newly created Federal area in the northern section of the town. The Kirkland Lake Cemetery is a member of the Commonwealth War Graves Commission and is the location of the graves of 12 soldiers, and 3 airmen of the Canadian forces who died during the Second World War.

Kirkland Lake's first fire hall was established in 1935 and the second fire hall in 1955.

In 1963 the open pit Adams Mine began developing its iron ore resources. The mine would stay in production until 1990.

In the early eighties, LAC Minerals reopened the main shaft of the Lake Shore Mine and worked it from 1982 to 1987 to extract pockets of gold that had been left behind. Between 1987 and 1991 Vancouver based Eastmaque Gold Mines reprocessed tailings, or "slimes", from early inefficient mill operations, extracting 70,000 ounces of gold.

Between October and December 1988, Kirkland Lake was the filming location for the drama film Termini Station.

On the morning of Sunday, May 20, 2012, a forest fire was discovered about 3 km (1.9 mi) north of Kirkland Lake, which grew to 2,757 ha (6,810 acres) by the afternoon of May 21, causing a state of emergency to be declared. Residential and cottage areas on Goodfish Lake and Nettie Lakes and one street in Chaput Hughes were evacuated that afternoon. Kirkland Lake Gold and AuRico Gold, suspended operations due to fire damage to power lines and local schools were closed. On May 29, the state of emergency was lifted, as the fire was determined to be no longer a threat to Kirkland Lake, although it was not yet under control.

On December 18, 2012, the town council voted to have fluoride removed from the local water treatment facility, after a breakdown left the town with a bill of $360,000.