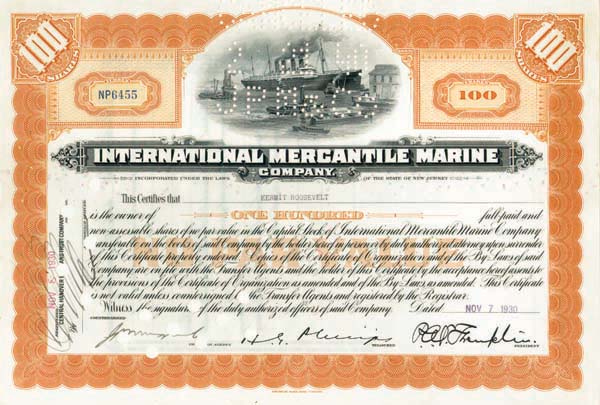 Stock signed at back by Kermit Roosevelt and printed by American Bank Note Company. Portrait and biography included.

Kermit Roosevelt (October 10, 1889  June 4, 1943) was a son of U.S. President Theodore Roosevelt. He was a graduate of Harvard University, a soldier serving in two world wars (with both the British and American Armies), a businessman, and a writer who explored two continents with his father. He fought a lifelong battle with depression and alcoholism, ultimately leading to suicide while serving in Alaska during World War II. Kermit was born at the family residence Sagamore Hill in Oyster Bay, New York, the second son of Theodore "T.R." Roosevelt, Jr. and Edith Kermit Carow. As a child, he had little resistance to illness and infection. He had a flair for language, however, and read avidly. He showed a talent for writing that led to recording his experiences in World War I in a book. After attending the Groton School, he enrolled at Harvard. In 1909, as a freshman, he and his father (recently out of office as President)both of whom loved nature and outdoor sportswent on a year-long expedition in Africa funded by the Smithsonian Institution. After this trip and a swing through Europe, Roosevelt returned to Harvard and completed four years of study in two and one-half years, graduating with the Class of 1912. He was a member of the Porcellian Club, as was his father. One of Theodore Roosevelt's most popular books, Through the Brazilian Wilderness, recounted the father-and-son expedition into the Amazon Basin Brazilian jungle in 191314. Father and son went on what would become known as the Roosevelt-Rondon Scientific Expedition, exploring the Brazilian jungle with explorer Colonel Cândido Rondon. During this expedition, they explored the River of Doubt, later renamed Rio Roosevelt in honor of the President, as well as a branch of that river named the Rio Kermit in his honor. The source of the river had been discovered by Rondon earlier, but it had never been fully explored or mapped. At the time of the expedition, Roosevelt was newly engaged to Belle Wyatt Willard, daughter of the U.S. ambassador to Spain. His mother Edith was concerned about her husband's health and the difficulties of a new expedition, and asked Kermit to accompany his father. He did so, reluctantly delaying his marriage. The scope of the expedition expanded beyond the original plans, leaving the participants inadequately prepared for a trip tracing the River of Doubt from its source through hundreds of kilometers of uncharted rainforest. The climate and terrain, inadequate gear and food, and two deaths (one drowning, the other murder) turned a scientific expedition into an ordeal. Roosevelt's father contracted malaria and a serious infection resulting from a minor leg wound, weakening him to the point that he considered taking a fatal dose of morphine rather than being a burden to his companions. Roosevelt told his father that he was bringing him back literally "dead or alive" and if he died, he would be an even bigger burden to the expedition. Although Roosevelt contracted malaria as well, he downplayed his sickness to save quinine for his father, nearly dying himself before the physician insisted on giving him the medication by injection. Roosevelt's determination, and his rope and canoe-handling skills were instrumental in saving his father's life. Nonetheless, his father would be plagued by flareups of malaria and inflammation so severe that they would require hospitalization. Although Kermit and TR faced skepticism about their claims of navigating a completely uncharted river over 1000 km long, they eventually silenced their critics through the elder Roosevelt's oratory and one of his most popular books, Through the Brazilian Wilderness. The 191314 expedition would later be recounted in The River of Doubt by Candice Millard (Doubleday 2005).