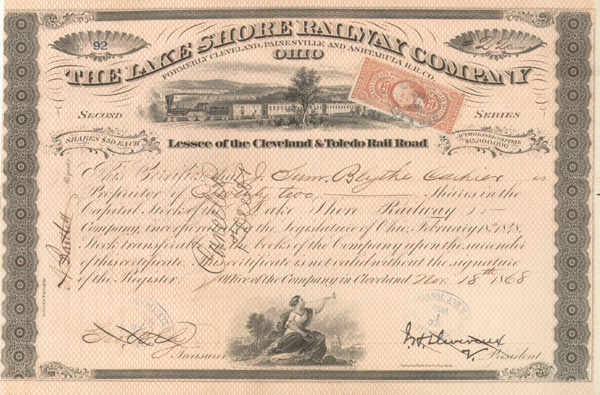 John Henry Devereux (1832-86), Civil Engineer, Railroad Executive. Extremely active in managing railroads including in 1862, he became superintendent of the railroads. He was president of the "Big Four" Cleveland, Columbus, Cincinnati & Indianapolis, an office he held until his death in 1886. Attractive 1868 stock signed by Devereux and lightly manuscript cancelled. From the Syracuse University Archive. Rare!!!

In October 1867, the Cleveland, Painesville and Ashtabula Railroad leased the Cleveland and Toledo Railroad. The CP&A changed its name to the Lake Shore Railway on March 31, 1868, and on February 11, 1869 the Lake Shore absorbed the Cleveland and Toledo. On April 6 the Michigan Southern and Northern Indiana Railroad and Lake Shore merged to form the Lake Shore and Michigan Southern Railway, which absorbed the Buffalo and Erie Railroad on June 22, giving one company the whole route from Buffalo to Chicago. The main route passed through Dunkirk, New York, Erie, Pennsylvania, Ashtabula, Ohio, Cleveland, Ohio, Toledo, Ohio, Waterloo, Indiana and South Bend, Indiana.