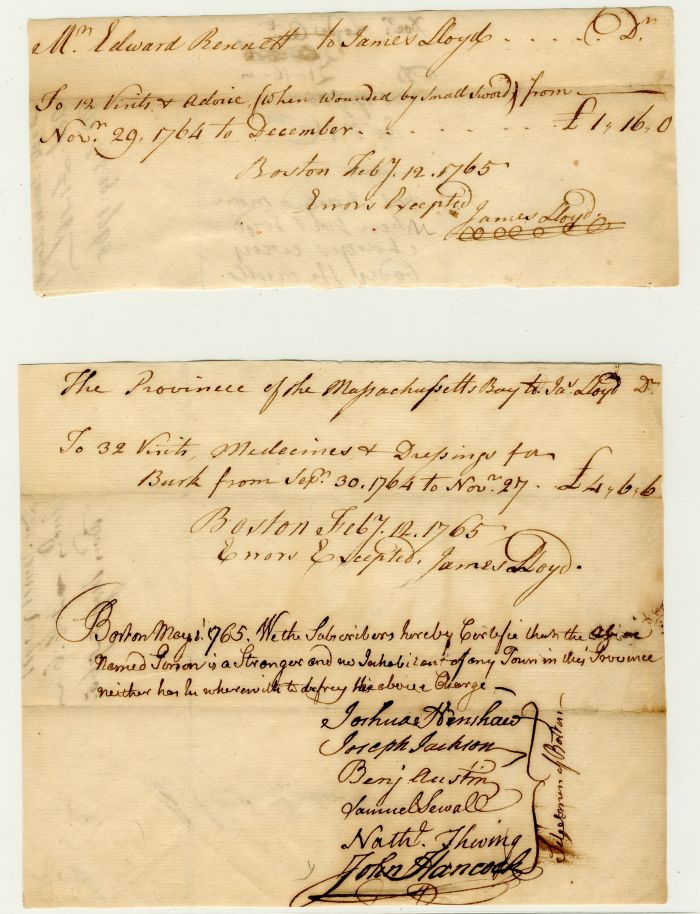 John Hancock signs a Pre-Revolutionary Massachusetts Document. Two Documents - Also signed by Benjamin Austin and Samuel Sewall. May 1, 1765. A document signed John Hancock as a Selectman of Boston.  The document relates to two payments to James Lloyd.  It was written in another hand and signed by a total of eight people, including Benjamin Austin and Samuel Sewall. Hancocks is the last signature on the bottom, below those of five other subscribers. It is large and easily recognizable, and the extreme bottom edge of the "J" is cut off. The document is in very good condition with some toning.

John Hancock (January 23, 1737 [O.S. January 12, 1736]  October 8, 1793) was an American merchant, statesman, and prominent Patriot of the American Revolution. He served as president of the Second Continental Congress and was the first and third Governor of the Commonwealth of Massachusetts. He is remembered for his large and stylish signature on the United States Declaration of Independence, so much so that the term "John Hancock" or "Hancock" has become a synonym in the United States for one's signature.

Before the American Revolution, Hancock was one of the wealthiest men in the Thirteen Colonies, having inherited a profitable mercantile business from his uncle. He began his political career in Boston as a protégé of Samuel Adams, an influential local politician, though the two men later became estranged. Hancock used his wealth to support the colonial cause as tensions increased between colonists and Great Britain in the 1760s. He became very popular in Massachusetts, especially after British officials seized his sloop Liberty in 1768 and charged him with smuggling. Those charges were eventually dropped; he has often been described as a smuggler in historical accounts, but the accuracy of this characterization has been questioned.

Hancock was one of Boston's leaders during the crisis that led to the outbreak of the American Revolutionary War in 1775. He served more than two years in the Continental Congress in Philadelphia, and he was the first to sign the Declaration of Independence in his position as president of Congress. He returned to Massachusetts and was elected governor of the Commonwealth, serving in that role for most of his remaining years. He used his influence to ensure that Massachusetts ratified the United States Constitution in 1788.