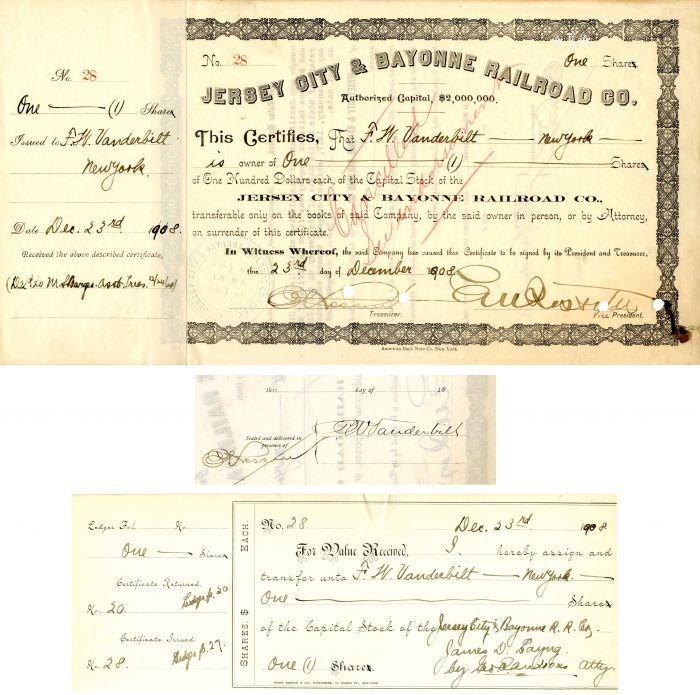 Stock issued to and signed on back by F.W. Vanderbilt. Also included are 2 share receipts. 1 is shown.

Frederick W Vanderbilt was the seventh of eight children born to William Henry Vanderbilt and the grandson of Cornelius Vanderbilt, founder of the New York Central Railroad. At age 22, he had been installed on the board of directors of the New York Central Railroad, one of several positions he would hold for much of his life. Frederick attended the Sheffield Scientific School at Yale University, graduating in 1878. The same year, he married Louise Anthony Torrance, an act that caused consternation within his family  and society as a whole  because Louise was 12 years older and recently divorced from Fredericks first cousin. Against his fathers wishes, the couple eloped. By all accounts, the couple had a happy and successful marriage. Louise eventually won her way into the good graces of the family. The couple had no children. Little is known of the couples personal life, as they were extremely private members of a very public family. Frederick was the only one of his siblings to increase his inherited fortune. Eventually, he participated in the operation of dozens of railroads and was for a time heavily invested in Western Union. The couple maintained many residences, traveling between New York City townhouses and country estates they either owned or rented. At times, they lived in Paris, Bar Harbor, Maine, the Adirondacks, Newport, R.I., and Hyde Park. Only their home on the Hudson seemed to have any hold. They continued to make improvements and increase their time at the estate each year. Louise Vanderbilt died in 1926 while in Paris. Frederick lived in Hyde Park until his death in 1938. His fortune of nearly $80 million was dispersed to pay estate taxes, fund charities, remember a favorite niece and leave some money to employees of the Hyde Park estate.

He was the grandson of Commodore Cornelius Vanderbilt, who first created the Vanderbilt family wealth. Upon his grandfather's death in 1877, 95% of the $100 million estate was left to his father and his three brothers ($5 million to Cornelius, and $2 million apiece to William, Frederick, and George).

After graduating from Yale, he joined his father at the New York Central Railroad, like his brothers, working in one department after another to gain an understanding of the railroad business. After working for many years at the railroad, he devoted his time to travel and yachting.

Vanderbilt was a director of 22 railroads, including New York Central Railroad, the Pittsburgh and Lake Erie Railroad, and the Chicago and North Western Railroad.

Vanderbilt was the owner of 10 East 40th Street in Manhattan, a prominent example of art deco architecture, until his death; he also owned the steam yachts Vedette, Conqueror and Warrior. He commissioned a number of campus buildings at Yale University by architect Charles C. Haight that survive to this day, from campus dormitories comprising the present-day Silliman College, to Vanderbilt Hall, Phelps Hall, the Mason, Sloane and Osborn laboratories, and his secret society, St. Anthony Hall.

In 1878, Frederick married Louise Holmes Torrance (née Anthony) (18541926), the daughter of Charles Lee Anthony and Catherine (née Holmes) Anthony. Louise's father was a successful dry-goods merchant in New York City. Louise had been previously married, in 1868, to Frederick's cousin Alfred Torrance, before their divorce in 1877.

Item ordered may not be exact piece shown. All original and authentic.
OUT OF STOCK
Request re-stock notice?
Email this to a friend
Request Info
Previous Item (Jersey City and Bayonne Railroad Co. Issued to and Signed by Wm. K Vanderbilt - Stock Certificate)    (John A. Tracy - Erie and the North East Railroad - Stock Certificate) Next Item