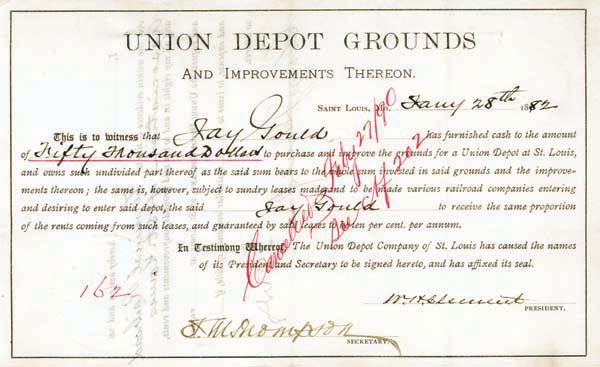 Jay Gould (1836-1892), Financier. As a youth, learned rudiments of surveying and showed precocious skill in money-making. Keenwitted and unscrupulous, he began speculating in railroads after 1860. His operations became spectacular when in 1867 with James Fisk he became a director of the Erie Railroad. This led to his struggle against Cornelius Vanderbilt for control. His victory and later various other involvement with the Union Pacific, Kansas Pacific, Denver Pacific, Central Pacific, Missouri, Kansas, and Texas made him a legend in Railroad finance. His son George Jay Gould inherited vast railway interests but lost these, one by one, to opposition financiers led by Kuhn, Loeb & Co., and Edward H. Harriman. This Very Rare railway stock of the Union Depot Grounds is issued to Jay Gould and nicely signed at back. His signature is witnessed by his son George J. Gould. (The signatures are more attractive than our illustration indicates. Scanning did not pick them up very well) Excellent Condition.
Item ordered may not be exact piece shown. All original and authentic.
Email this to a friend
Request Info
Previous Item (Cincinnati, Hamilton and Dayton Railroad Company issued to Sidney Dillon - Stock Certificate)    (Cincinnati, Hamilton and Dayton Railroad Company signed by Eugene Zimmerman) Next Item