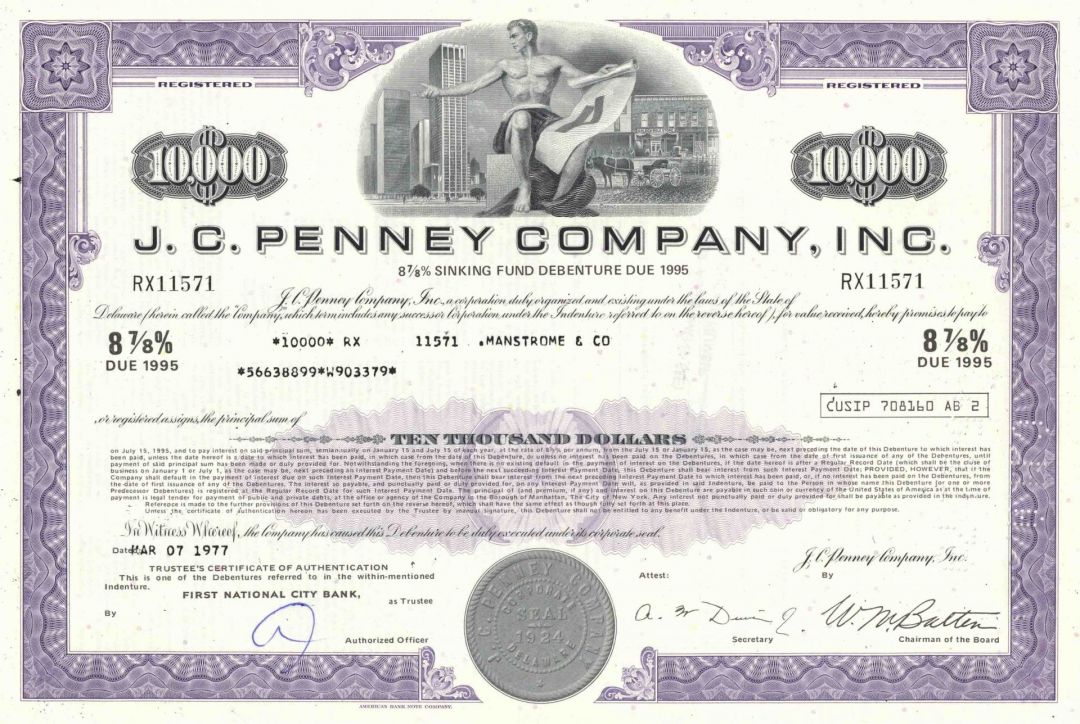 Various Denominations. Vignette of male figure in front of modern city on one side and old time city on the other. Available in Purple or Orange. Please specify color.

James Cash Penney was born in Hamilton, Missouri. After graduating from high school, Penney worked for a local retailer. He relocated to Colorado at the advice of a doctor, hoping that a better climate would improve his health. In 1898, Penney went to work for Thomas Callahan and Guy Johnson, who owned dry goods stores called Golden Rule stores in Colorado and Wyoming. In 1899, Callahan sent Penney to Evanston, Wyoming, to work with Johnson in another Golden Rule store. Callahan and Johnson asked Penney to join them in opening a new Golden Rule store. Using money from savings and a loan, Penney joined the partnership and moved with his wife and infant son to Kemmerer, Wyoming, to start his own store. Penney opened the store on April 14, 1902. He participated in the creation of two more stores and purchased full interest in all three locations when Callahan and Johnson dissolved their partnership in 1907. In 1909, Penney moved his company headquarters to Salt Lake City, Utah to be closer to banks and railroads. By 1912, Penney had 34 stores in the Rocky Mountain States. In 1913, all stores were consolidated under the J. C. Penney banner. The so-called "mother store", in Kemmerer, opened as the chain's second location in 1904. It still operates, as of 2018, albeit with shorter hours than many other locations, and is closed on Sundays.

In 1913, the company was incorporated under the new name, J. C. Penney Company, with William Henry McManus as a co-founder. In 1914, the headquarters was moved to New York City to simplify buying, financing, and transportation of goods. By 1917, the company operated 175 stores in 22 states in the United States. J. C. Penney acquired The Crescent Corset Company in 1920, the company's first wholly owned subsidiary. In 1922, the company's oldest active private brand, Big Mac work clothes, was launched. The company opened its 500th store in 1924 in Hamilton, Missouri, James Cash Penney's hometown. By the opening of the 1,000th store in 1928, gross business had reached $190 million (equivalent to $3 billion in 2023).