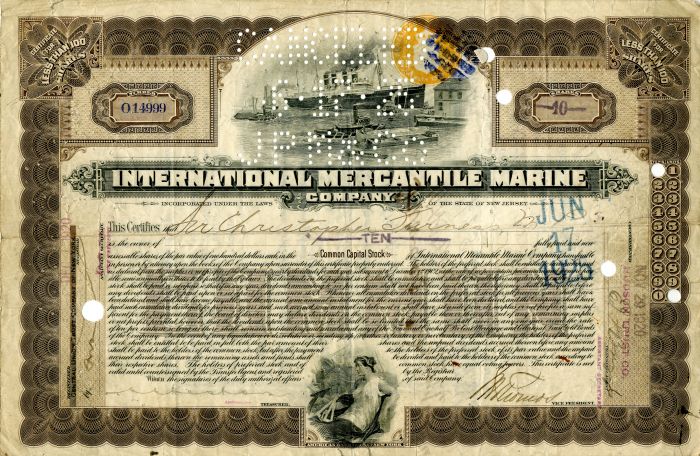 Stock issued to Sir Christopher Furness. Signed on back by relatives as members of his estate.

Christopher Furness, 1st Baron Furness (23 April 1852  10 November 1912) was a British businessman and Liberal Party politician. He started his career as a buyer in Thomas Furness and Company, wholesale provision merchants, a firm owned by his older brother Thomas, and became a partner two years later. Stock for the business had to be brought in by ship, and Christopher found that it would be cheaper to use their own vessels, rather than hire other peoples. Consequently, on his initiative, the firm bought several steam ships from local shipbuilder William Gray & Company in 1877. In 1882, Christopher Furness and Company was formed and the business was split into two. Thomas kept the provision merchants, while Christopher took charge of the shipping fleet. After seven years as a partner in the shipbuilding firm of Edward Withy and Company, Furness merged it with his own company in 1891, to form Furness, Withy and Company, which was run by his nephew, Sir Stephen Furness, 1st Baronet after his death. By a series of mergers, his firms become the main employers in Hartlepool, until they finally closed in the 1980s. Furness was also involved in politics, and was elected Member of Parliament for The Hartlepools at a by-election in 1891. He lost the seat in 1895, but was re-elected in 1900 general election, and served until his re-election in January 1910 was declared void after an electoral petition. In the 1895 Birthday Honours, he was invested as a Knight Bachelor and, in 1910, he was raised to the peerage as Baron Furness, of Grantley in the West Riding of the County of Yorkshire. Moreover, in 1909 he was made an Honorary Freeman of West Hartlepool.