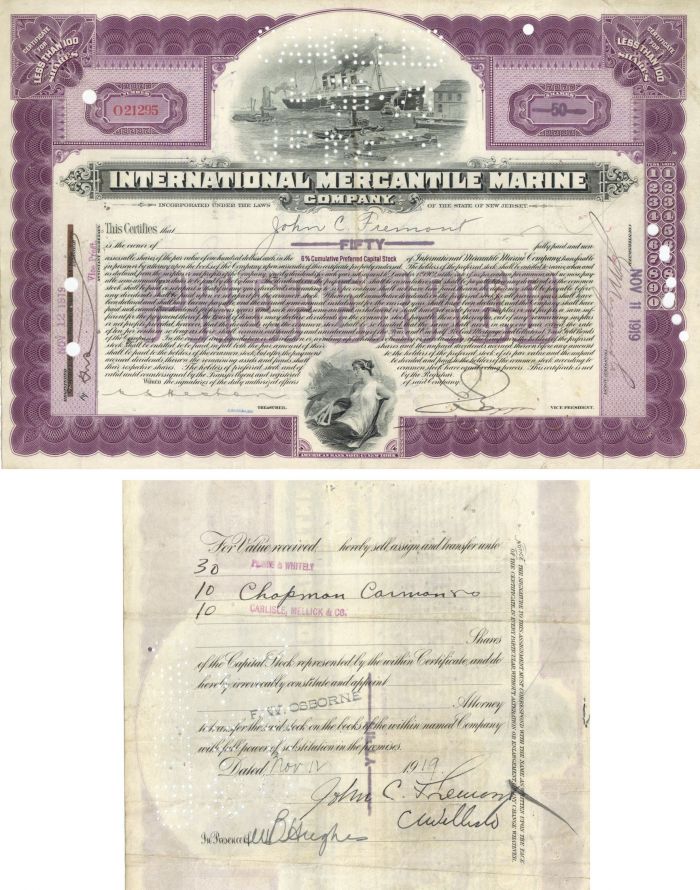 Stock issued to John C. Fremont and possibly signed by a relative. Also included a delivery bill and 2 receipts with several revenue stamps on them!

John Charles Frémont (January 21, 1813  July 13, 1890), was an American military officer, explorer, the first candidate of the Republican Party for the office of President of the United States, and the first presidential candidate of a major party to run on a platform in opposition to slavery. Frémont was nominated for the Presidency on May 31, 1864 by the Radical Republicans, a group of hard-line Republican abolitionists upset with Lincoln's position on the issues of slavery and post-war reconciliation with the southern states. This 1864 frisson in the Republican Party divided the party into two factions: the anti-Lincoln Radical Republicans, who nominated Frémont, and the pro-Lincoln Republicans. Frémont abandoned his political campaign in September, 1864, after he brokered a political deal in which Lincoln removed U.S. Postmaster General Montgomery Blair from office. The state of Missouri took possession of the Pacific Railroad in February 1866, when the company defaulted in its interest payment, and in June 1866, the state, at private sale, sold the road to Frémont. Frémont reorganized the assets of the Pacific Railroad as the Southwest Pacific Railroad in August 1866. However, in less than a year, the railroad was repossessed by the state of Missouri after Frémont was unable to pay the second installment on his purchase. He subsequently became interested in the construction of railroads and in 1873, was prosecuted by the French government for alleged participation in the swindles connected with the proposed transcontinental railway from Norfolk to San Francisco, and was sentenced on default, to fine and imprisonment, no judgment being given on the merits of the case. Gen. Fremont was governor of Arizona in 1878-81, and was appointed major-general on the retired list by act of Congress in 1890. Destitute, the family depended on the publication earnings of wife, Jessie. Frémont collected a number of plants on his expeditions, including the first recorded discovery of the Single-leaf Pinyon by a European American. The standard botanical author abbreviation Frém. is applied to plants he described. Many places are named for Frémont. Four U.S. states named counties in his honor: Colorado, Idaho, Iowa, and Wyoming. Several states also named cities after him, such as California, Michigan, Nebraska, New Hampshire, and Ohio. Frémont died in 1890 a forgotten man, of peritonitis in a hotel in New York City, and was buried in Rockland Cemetery, Sparkill, New York.