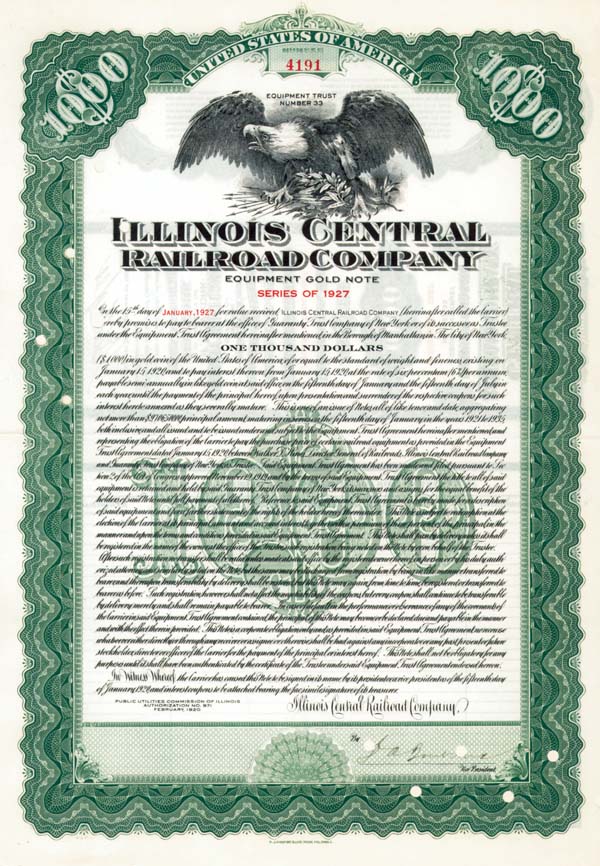 The Illinois Central Railroad (reporting mark IC), sometimes called the Main Line of Mid-America, was a railroad in the central United States, with its primary routes connecting Chicago, Illinois, with New Orleans, Louisiana, and Mobile, Alabama. A line also connected Chicago with Sioux City, Iowa (1870). There was a significant branch to Omaha, Nebraska (1899), west of Fort Dodge, Iowa, and another branch reaching Sioux Falls, South Dakota (1877), starting from Cherokee, Iowa. The Sioux Falls branch has been abandoned in its entirety.

The Canadian National Railway acquired control of the IC in 1998.

The IC was one of the oldest Class I railroads in the United States. The company was incorporated by the Illinois General Assembly on January 16, 1836. Within a few months Rep. Zadok Casey (D-Illinois) introduced a bill in the U.S. House of Representatives authorizing a land grant to the company to construct a line from the mouth of the Ohio River to Chicago and on to Galena. Federal support, however, was not approved until 1850, when U.S. President Millard Fillmore signed a land grant for the construction of the railroad. The Illinois Central was the first land-grant railroad in the United States.

The Illinois Central was chartered by the Illinois General Assembly on February 10, 1851. Senator Stephen A. Douglas and later President Abraham Lincoln were both Illinois Central men who lobbied for it. Douglas owned land near the terminal in Chicago. Lincoln was a lawyer for the railroad. Illinois legislators appointed Samuel D. Lockwood, recently retired from the Illinois Supreme Court (who may have given both lawyers the oral examination before admitting them to the Illinois bar), as a trustee on the new railroad's board to guard the public's interest. Lockwood, who would serve more than two decades until his death, had overseen federal land monies shortly after Illinois' statehood, then helped oversee early construction of the recently completed Illinois and Michigan Canal.

Upon its completion in 1856, the IC was the longest railroad in the world. Its main line went from Cairo, Illinois, at the southern tip of the state, to Galena, in the northwest corner. A branch line went from Centralia (named for the railroad), to the rapidly growing city of Chicago. In Chicago its tracks were laid along the shore of Lake Michigan and on an offshore causeway downtown, but land-filling and natural deposition have moved the present-day shore to the east. Track from Centralia, Il north to Freeport, Il was abandoned in the 90s, as traffic to Galena was routed via Chicago, then to Galena and vice versa.

In 1867 the Illinois Central extended its track into Iowa, and during the 1870s and 1880s, the IC acquired and expanded railroads in the southern United States. IC lines crisscrossed the state of Mississippi and went as far as New Orleans, Louisiana, to the south and Louisville, Kentucky, in the east. In the 1880s, northern lines were built to Dodgeville, Wisconsin, Sioux Falls, South Dakota, and Omaha, Nebraska. Further expansion continued into the early twentieth century.

The Illinois Central, and the other "Harriman lines" owned by E.H. Harriman by the 20th century, became the target of the Illinois Central shopmen's strike of 1911. Although marked by violence and sabotage in the south, midwest, and western states, the strike was effectively over in a few months. The railroads simply hired replacements, among them African-American strikebreakers, and withstood diminishing union pressure. The strike was eventually called off in 1915.

In August 31, 1962, the railroad was incorporated as Illinois Central Industries, Inc. With this diversification, ICI, acquired its first business Abex(formerly American Brake Shoe and Foundry) Corporation in 1968.

At the end of 1980 ICG operated 8,366 miles of railroad on 13,532 miles of track; that year it reported 33,276 million ton-miles of revenue freight and 323 million passenger-miles. Later in that decade, the railroad spun off most of its eastwest lines and many of its redundant northsouth lines, including much of the former GM&O. Most of these lines were bought by other railroads, including entirely new railroads such as the Chicago, Missouri and Western Railway, Paducah and Louisville Railway, Chicago Central and Pacific Railroad and MidSouth Rail Corporation.

With bottling Pepsi products, Whitman purchased a rival Minnesota based PepsiAmericas Inc. bottler in 2000. On February 29, 1988, the newly separated ICG dropped the "Gulf" from its name and again became the Illinois Central Railroad.

On February 11, 1998 the IC was purchased for approximately $2.4 billion in cash and shares by Canadian National Railway (CN). Integration of operations began July 1, 1999.

A Story written by the first president of the C&NW railroad, surrounding the competition between a Chicago and Northwestern Mikado and a Milwaukee Road Mountain, took place mostly on the Illinois Central Railroad in Kankakee. This was one of Marvin Hughitt's last stories before his death in 1928. The story was eventually rewritten and remade in the fall of 2010 in the form of "Fall Weather Friends".

The Illinois Central was a major carrier of passengers on its Chicago-to-New Orleans mainline and between Chicago and St. Louis. IC also ran passengers on its Chicago-to-Omaha line, though it was never among the top performers on this route. Illinois Central's largest passenger terminal, Central Station, stood at 12th Street east of Michigan Avenue in Chicago. Due to the railroad's north-south route from the Gulf of Mexico to the Great Lakes, Illinois Central passenger trains were one means of transport during the African American Great Migration of the 1920s.

On May 1, 1971 Amtrak took over intercity rail service. It retained service over the IC mainline, but dropped the Panama Limited in favor of the City of New Orleans. However, since it did not connect with any other trains in either New Orleans or Chicago, Amtrak moved the route to an overnight schedule and brought back the Panama Limited name. However, it restored the City of New Orleans name in 1981, while retaining the overnight schedule. This was to capitalize on the popularity of a song about the train written by Steve Goodman and performed by Arlo Guthrie: Willie Nelson's recording of the song was #1 in 1984.

Illinois Central ran several other trains along the main route including The Creole and The Louisiane.

The Green Diamond was the Illinois Central's premier train between Chicago, Springfield and St. Louis. Other important trains included the Hawkeye which ran daily between Chicago and Sioux City and the City of Miami eventually running every other day between Chicago and Miami via the Atlantic Coast Line, the Central of Georgia Railroad and Florida East Coast Railway.

The Illinois Central was also a major operator of commuter trains in the Chicago area, operating what eventually became the "IC Electric" line from Randolph Street Terminal in downtown Chicago to the southeast suburbs. In 1987, IC sold this line to Metra, who operates it as the Metra Electric District. It still operates out of what is now Millennium Station, which is still called "Randolph Street Terminal" by many longtime Chicago-area residents. In honor of the Panama Limited, the Electric District appears as "Panama Orange" on Metra system maps and timetables. Additionally, the IC operated a second commuter line out of Chicago (the West Line) which served Chicago's western suburbs. Unlike the electrified commuter service, the West Line did not generate much traffic and was eliminated in 1931.

Amtrak presently runs three trains daily over this route, the City of New Orleans and the Illini and Saluki between Chicago and Carbondale. Another Illinois corridor service is planned for the former Black Hawk route between Chicago, Rockford and Dubuque. Amtrak, at the state of Illinois' request, did a feasibility study to reinstate the Black Hawk route to Rockford and Dubuque. Initial capital costs range from $32 million to $55 million, depending on the route. Once in operation, the service would require roughly $5 million a year in subsidies from the state.

On December 10, 2010, IDOT announced the route choice for the resumption of service to begin in 2014 going over mostly CN railway.

Presidents of the Illinois Central Railroad have included:

This transport-related list is incomplete; you can help by expanding it.

Some historic equipment owned and used by Illinois Central can be found in museums across the United States, including:

The original Mississippi Central line was chartered in 1852. Construction of the 255 miles (410 km) 5 ft (1,524 mm) gauge line began in 1853 and was completed in 1860, just prior to the Civil War, from Canton, Mississippi to Jackson, Tennessee. The southern terminus of the line connected to the New Orleans, Jackson and Great Northern Railroad at Canton. It also connected to the Memphis and Charleston Railroad at Grand Junction, Tennessee and the Mobile and Ohio Railroad at Jackson, Tennessee. The Mississippi Central was the scene of several military actions from 18621863 and was severely damaged during the fighting. Company president, Absolom M. West succeeded in repairing the damage and returning it to operating condition soon after the end of the War.

By 1874, interchange traffic with the Illinois Central Railroad was important enough that the IC installed a Nutter hoist at Cairo, Illinois to interchange between its standard gauge equipment broad gauge used by the Mississippi Central. This allowed the trucks to be exchanged on 16-18 freight cars per hour, and one Pullman car could be changed in 15 minutes. The original Mississippi Central line was merged into the Illinois Central Railroad subsidiary Chicago, St. Louis and New Orleans Railroad in several transactions finally completed in 1878.

A line started in 1897 as the "Pearl and Leaf Rivers Railroad" was built by the J.J. Newman Lumber Company from Hattiesburg, to Sumrall. In 1904 the name was changed to the Mississippi Central Railroad (reporting mark MSC). In 1906 the Natchez and Eastern Railway was formed to build a rail line from Natchez to Brookhaven. In 1909 this line was absorbed by the Mississippi Central.

For a short time during the 1920s, the line operated a service named "The Natchez Route", running trains from Natchez to Mobile, Alabama through trackage agreements with the Gulf, Mobile and Northern Railroad. At Natchez, freight cars were ferried across the Mississippi River to connect with the Louisiana and Arkansas Railway to institute through traffic into Shreveport, Louisiana. In 1967 the property of the Mississippi Central was sold to the Illinois Central Railroad.