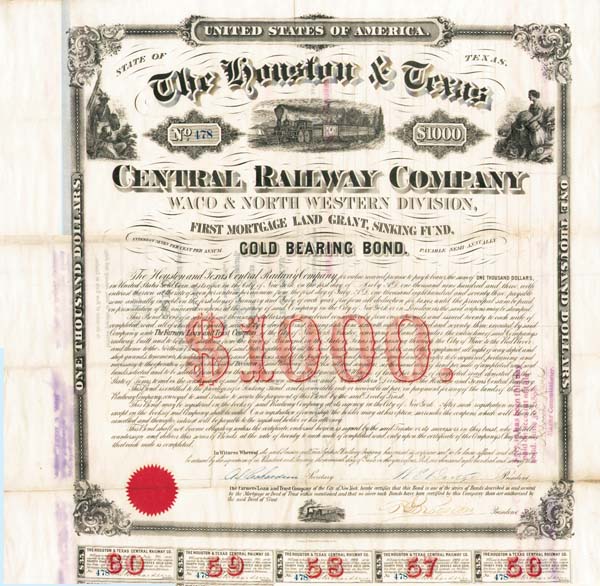 $1,000 7% Gold Uncancelled Bond. Signed at front by William Earle Dodge Sr. (September 4, 1805  February 9, 1883) was a New York businessman, referred to as one of the "Merchant Princes" of Wall Street in the years leading up to the American Civil War. Dodge saw slavery as an evil to be peaceably removed, but not to be interfered with where it existed. He was a Native American rights activist and served as the president of the National Temperance Society from 1865 to 1883. Dodge represented New York's 8th congressional district in the United States Congress for a portion of the 39th United States Congress in 1866-1867 and was a founding member of the Young Men's Christian Association (YMCA). His son, Charles Cleveland Dodge, was one of the youngest brigadier generals in the Union Army during the Civil War at the age of twenty-one.

In 1840 work began on a railroad from Harrisburg to the Brazos River that was later chartered as the Harrisburg Rail Road and Trading Company. Although this company subsequently failed, and its charter lapsed, this was the first attempt to build a railroad over a route that later became a part of the Southern Pacific. The decade of the 1850s, however, saw the construction of five railroads that were later acquired by the Southern Pacific. Work on the Buffalo Bayou, Brazos and Colorado Railway began in 1851, and by late 1860 the line was open from Harrisburg to Alleyton. The BBB&C was not only the first railroad to operate in Texas, but also the first component of the Southern Pacific to begin operating. It is also generally considered to have been the second railroad west of the Mississippi River. By early 1861 the Houston and Texas Central (originally the Galveston and Red River Railway Company) was operating between Houston and Millican, while the Texas and New Orleans (originally the Sabine and Galveston Bay Railroad and Lumber Company) was completed between Houston and Orange. The Washington County Rail Road between Hempstead and Brenham and the San Antonio and Mexican Gulf Railroad from Port Lavaca to Victoria were also built during this period. Although all five suffered from a lack of capital, the companies had constructed over 300 miles of track during the decade, and only the outbreak of the Civil War halted further construction. In 1867 work resumed on the Houston and Texas Central. The company reached Dallas on July 8, 1872, and, on March 15, 1873, Red River City, where connection was made with the Missouri, Kansas and Texas Railway. This connection was the first between the rail system of Texas and the expanding national network. The Houston and Texas Central acquired the Washington County in 1869 and extended the line to Austin, where the last spike was driven on 2:30 P.M. on Christmas Day 1871. The Texas and New Orleans became the western end of the first all-rail route to New Orleans when the connecting Louisiana Western was completed on August 26, 1880. The Buffalo Bayou, Brazos and Colorado was renamed the Galveston, Harrisburg and San Antonio on July 27, 1870. Construction of the San Antonio extension began in 1873, and rails reached the Alamo City on February 7, 1877. Work on the Mexican and Pacific extension between San Antonio and El Paso was underway when the GH&SA passed into the control of the Southern Pacific in July 1881. The last of the antebellum railroads, the San Antonio and Mexican Gulf, was combined with the Indianola Railroad Company on April 22, 1871, to form the Gulf, Western Texas and Pacific. (From Hendler, 2018)
Condition: Excellent

Item ordered may not be exact piece shown. All original and authentic.
Email this to a friend
Request Info
Previous Item (Seaboard-All Florida Railway - $1,000)    (Georgia & Florida Railroad - $1,000) Next Item