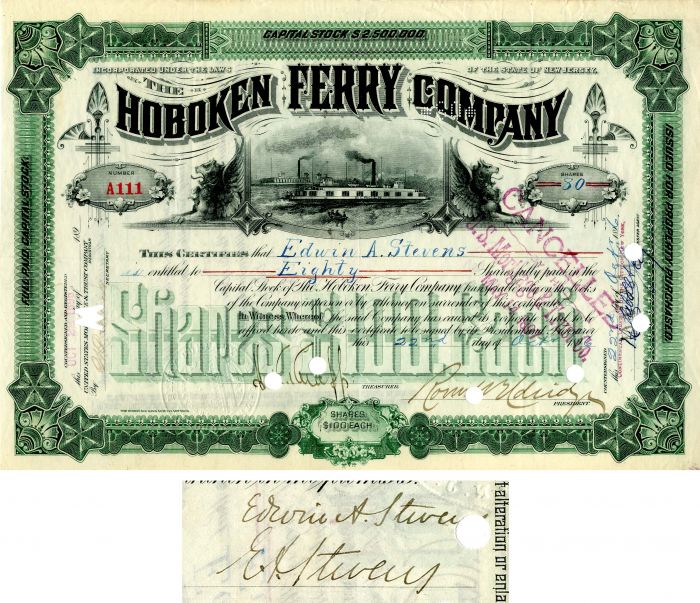 Years: 1896
Stock issued to and signed by Edwin A. Stevens twice on back of stock. Certainly a decendent of E.A. Stevens, railroad magnate.

Edwin Augustus Stevens (July 28, 1795  August 8, 1868) was an American engineer, inventor, and entrepreneur who left a bequest that was used to establish the Stevens Institute of Technology. Stevens was born at Castle Point, Hoboken, New Jersey, the son of Colonel John Stevens III (1749-1838) and his wife Rachel Cox (1761-1839). He was the sixth of eleven children, and among his older brothers were John Cox Stevens and Robert Livingston Stevens. In 1836 he married Mary Barton Picton, daughter of Rev. Thomas Picton of Princeton, New Jersey. They had a daughter, Mary Picton Stevens (May 19, 1840  September 21, 1903), who went on to marry Virginia politician Muscoe Russell Hunter Garnett and later Edward Parke Custis Lewis, U.S. minister to Portugal. In 1854, after his first wife's death, Stevens married Martha Bayard Dod (May 15, 1831  April 1, 1899). She was the daughter of Albert Baldwin Dod (1805-1845), professor of mathematics at Princeton University, and Caroline Smith Bayard, who was the daughter of Samuel Bayard (1766-1840) and granddaughter of Continental Congressman John Bubenheim Bayard (1738-1808). With Martha he had six children: John Stevens, Edwin Augustus Stevens Jr., Caroline Bayard Stevens, Robert Livingston Stevens, Charles Albert Stevens, and Richard Stevens. At an early age Stevens was entrusted by his father with the family business affairs, and in 1821 at the age of 26 he assumed full responsibility for the Stevens estate in Hoboken and other properties. Also in 1821, he developed the "Stevens plow," a cast-iron plow with a curved moldboard and replaceable heel piece. The plow was popular among New Jersey farmers. He went on to design many other technological innovations, such as the twohorse dump wagon for New York City; the "closed fireroom system of forced draft for his family's steamboat fleet; and the "vestibule car" for the Camden and Amboy Railroad. Following the death of Colonel Stevens in 1838, Edwin and his brother Robert worked on a commission from the United States government to construct the nation's first ironclad naval vessel. After conducting tests to determine the amount of armor a vessel needed to defend itself against naval guns, the two brothers constructed a huge vessel known as the Stevens Battery. Though the craft was never fully completed, it nevertheless laid the groundwork for the modern armored warship. A scaled-down version, the USS Naugatuck, saw limited action in the Civil War. After the war, the Naugatuck and the Battery were sold for scrap. Stevens was part of the syndicate from the New York Yacht Club that built and raced the schooner-yacht America. His brother, John Cox Stevens, was the head of the syndicate and the NYYC's first Commodore. Edwin Augustus also served as Commodore of the NYYC, resigning in 1866. He died in Paris, France. His will left land adjoining his family estate, $150,000 for the erection of a building and $500,000 as an endowment for the establishment of an "institution of learning". Because of the Stevens family's close ties with engineering, the executors decided this would be an institution devoted to the "mechanical arts". A building on the Stevens campus now stands as The Edwin A. Stevens Hall, which houses the school of engineering for the Institute. Also in this building is the renowned "DeBaun Auditorium", which is over 100 years old, and has been refurbished to what it would have looked like when first constructed.