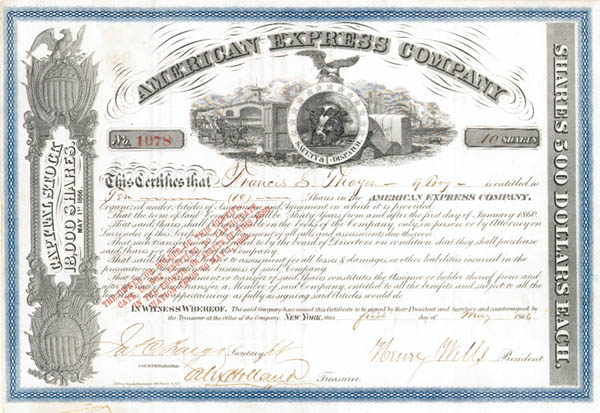 Henry Wells (1805-1878) Expressman. Formed American Express and became its President from 1850-68. In 1852 he organized Wells, Fargo & Co. James C. Fargo (1829-1915), Express Executive, Brother of William G. In 1866 became Superintendent and Manager of American Express and in 1881 became President. 1866 stock, Uncanceled, "Capital Stock 18,000 Shares" type with red overprint, with the very pretty blue border. The signatures of both Wells and Fargo are superb! Minor mounting residue at back & minor old tape repair at back margin otherwise Excellent Condition. Portraits of Wells and Fargo are included. Nicer than normal and the best eye appeal!